Kim Zapata says, "A brain aneurysm took my dad's life, my aunt's life, and may Someday take my own. I worry each tingle and pain may be the last." Now, it's her turn to learn about her risks.

I arrive 15 minutes early. Avoid eating or drinking after midnight. Remove all jewelry and metallic materials. The prep was easy, though a septum piercing, nostril piercing, navel piercing, nipple piercing, and several lobe and cartilage piercings made the latter time-consuming. I stood in the mirror with emu oil and pliers and slowly removed each stud, post, and ring. However, once I arrived at the imaging center, I was ready. It was time for my biennial MRA.

For those unfamiliar, an MRA—or magnetic resonance angiography—is a non-invasive test that helps doctors discover and diagnose conditions affecting the blood vessels, including those in the head, neck, chest, and heart. And while many my age have yet to see (and may never see) the inside of an MRA machine, my brain has been scanned on numerous occasions because my family has a history of aneurysms—brain aneurysms, to be specific—and this silent killer has claimed several Curlik lives.

My aunt was diagnosed with six in her mid-30s. My father died from one when he was 39.

I pass the time in the waiting room with some light reading. I page through glossy lifestyle magazines, about wellness, fitness, and tiny homes. I finger through pamphlets and brochures touting new technology. (Now there's something called an open MRI—instead of sliding into the tiny, coffin-like tube of a traditional MRI machine, you recline on a table with most of your body exposed.) And I scroll through Facebook. I watch dozens of Insta stories until a young man calls my name.

He walks me to a cold, windowless room and instructs me to disrobe.

I lay on a body-sized tray in a thin, paper gown. Instructions are given. Settings are checked, and then the machine begins to whir. I shut my eyes, and that's when I see it: flashes of my past and what my life could be if this test detects something. If things go wrong.

Flash. I am in my living room. The furniture has been moved. The coffee table has been pushed back—and the couch pushed aside—and in the middle of the floor there is unfolded laundry, an oxygen mask, and two resuscitation paddles covered in my dad's chest hair.

Flash. Upon entering the hospital, my grandparents are informed of my father's location: the CICU. The halls are wide and white. The tiled floor is polished, and save for the cafeteria, the building reeks of alcohol and bleach.

Flash. Two seemingly heavy doors swing open, into a guarded ward and (yet another) hall. I meet my mother, her siblings, my grandmother, and my aunt. I hear words that I know thanks to George Clooney and ER but do not understand. Things like aneurysm, urgent, cardiac arrest, and code blue. And I sit on a stiff couch covered in brown vinyl and tissues. Used tissues. There are so many I have to push the soggy sheets aside.

Flash. I see my father. His eyes are closed. His head is shaved, and tubes extend from his hands, nose, mouth, chest, and brain. I do not touch him but I imagine he is cold. His breathing (like his life) is clinical. A bulky bedside machine is doing all the work.

RELATED: This 40-Year-Old Suffered a Stroke in the Middle of a Yoga Handstand

What Is An Aneurysm?

Aneurysms affect millions each year. A brain (or cerebral) aneurysm is a thin or weak spot on an artery in the brain, which can cause the vessel to bulge or balloon. The good news is that most aneurysms are treatable, using stenting, clipping, and/or endovascular coiling, a minimally invasive technique that blocks blood flow into the aneurysm. What's more, the vast majority cause few problems. One out of every 50 Americans has (or will have) an aneurysm, and most will never require surgery or present any symptoms.

However, all aneurysms run the risk of rupturing, which can lead to severe complications and even death. So what can you do to protect yourself and prevent aneurysms? According to the American Heart Association, you should follow these basic steps:

If you have a familial history of aneurysms, you should also be screened on a regular basis—though, according to the Brain Aneurysm Foundation, aneurysms are only considered hereditary if two or more first-degree family members have them.

That said, even the best tests have faults and flaws. My father was screened less than a year before his death. He was given a clean bill of health. My aunt, the woman who had six surgically repaired aneurysms in her 30s, died from one three decades later. She was 64. And that is because misdiagnosis can occur.

According to a 2013 review and analysis of prior studies, published in the journal Stroke, MRA correctly identifies brain aneurysms in roughly 95% of people who have them, meaning that about 5% go undetected. And for that reason, I worry. Every headache makes me nervous. I worry each tingle and pain may be the last I'll ever feel. My heart will stop like my father's. I will drop (in an instant) like my aunt. And I worry about tests, and between tests. What if the doctor misread my results? What will I and my family do if my MRA ever yields a positive result? And I'll be honest: I don't know.

RELATED: A Man With a Tapeworm in His Brain Just Had Surgery to Remove It After 10 Years

The uncertainty keeps me awake at night.

I get my affairs in order almost every day. But I also live life to the fullest. I cuddle my daughter every evening. I thank god when I wake up to feed my son every morning, even if it is at 5:00 am. And we "make memories" every weekend. Our days are long and busy but there is love. Our hearts are full. And that is everything because while I may fear both aneurysms and death, I refuse to let them prevent me from living my life.

Why Emilia Clarke's Recovery After 2 Brain Aneurysms Is So 'Remarkable': 'I Am in the Really Small Minority'
What Happens When You Hate Dieting—But You Also Hate Your Body 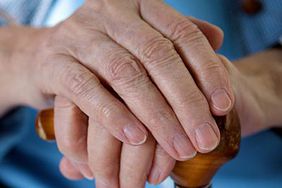 After His Wife Died of COVID-19 a Husband Encourages Others To Get Vaccinated
For 6 Years, Doctors Kept Telling Me I Had PMS—but It Turned Out to Be Brain Cancer