After an accidental hit to the head, Kate Anderson, 37, was diagnosed with a mild traumatic brain injury, which led to post-concussion syndrome.

This article is part of Health's series, Life Interrupted: Living With an Invisible Illness. Each month, one woman will share what it's like to appear healthy on the outside while navigating daily life with a serious physical or mental health condition.

"When will you be better?"

"You still have symptoms?"

These are the types of questions and comments I've been receiving since beginning my journey with post-concussion syndrome (PCS), following a mild traumatic brain injury in February 2019.

To be fair, I'd likely be the one asking such questions in the past. I had no idea what PCS was before experiencing it, especially because the pain from a previous concussion went away quickly with no lasting damage. I genuinely believed that would be the case this time. But I've continued to experience symptoms—with slow and unsteady progress.

According to the Centers for Disease Control and Prevention (CDC), PCS happens when symptoms of a concussion continue for weeks or return when you attempt to resume normal activities. It is thought that PCS is more common in people who have experienced more than one concussion.

An accidental Hit to the Head

My journey began when I participated in a wrestling-themed improv show. The goal to "keep things safe" went awry as the show got chaotic, and at one point somebody's leg hit my head at high velocity. I saw stars and felt a bit dizzy, so I stayed on the sidelines for the remainder of the show, figuring my head would calm down soon. Nobody was concerned because I "seemed so calm."

After the show, I headed home and noticed that the streetlights appeared particularly bright. The next day, my head still hurt and I felt off, so I took a sick day from my real estate marketing job and went to the clinic near my home in New Jersey. The healthcare provider performed routine tests, diagnosed my symptoms as mild traumatic brain injury (TBI), and instructed me to rest for a few days. If I passed out, threw up, or if symptoms lasted for more than a month, I was to get a CT scan.

Over the next four weeks, I experienced dizziness and nausea. But I never passed out or vomited, so I continued with my normal life. I avoided jogging and minimized screen time due to my light sensitivity and the migraines I was now having. Most people I interacted with didn't suspect anything was wrong because I looked fine.

After a month of experiencing the same symptoms, I went for a CT scan, which was negative—apparently common for brain injuries—and saw a neurologist.

I'd read a bit in the past about NFL players experiencing long-term concussion problems, but nothing about sustained side effects for people like me. I've since learned that many of my symptoms are common, but that each brain is incredibly different. Here are some of my symptoms.

I'd had a handful of migraines throughout my life, but they always went away within a day. With PCS, I experience pain in my head around the clock. Pain ranges from low-level to something like daggers in my skull, forcing me to lie down in a dark room with ice packs. Heat and humidity make it worse.

I am extremely light-sensitive since the injury—imagine going to a matinee and your eyes never fully adjusting after leaving the dark theater. Tools that help me cope include blue light glasses for glares. Also, I've lowered the brightness and blue light settings on my phone. The brighter screens from phones around me are still a lot to take in.

My brain also struggles to follow fast movements and excessive visual stimulation. Walking in busy areas like Times Square is beyond overwhelming. I now wear a cap in the city, which decreases visual input. Certain visual exercises help me, like doing jigsaw puzzles.

At my office, working at my computer exacerbates symptoms. My employer has accommodated me by providing anti-glare screen covers. I have a gorgeous view of the Manhattan skyline from my desk, but I keep the shades down to reduce the painful light. Some coworkers don't know about or forget I have PCS, so they'll comment about how dark it is at my desk, while it feels bright to me.

Brain flooding is terrifying—but thankfully this hasn't occurred often. Too much stimulus—noise, lights, conversation—and my brain shuts down. I don't pass out, but my brain feels like it freezes up, and I can't think. It's as though my brain was previously working as a new iPhone, then suddenly becomes a 2002 flip phone with low battery power that can only be used to dial a few numbers. When these symptoms come on, I have to immediately rest so that I can function again.

Vertigo is a feeling that the space around you is spinning, and it often causes dizziness. I started to accept having a disability when I began asking for disability seating on the crowded commute to and from work. I was tired of experiencing vertigo from standing up on the train before realizing I didn't need to do that to myself. At first, I was afraid my fellow commuters would resist. Each time I've asked, however, everyone has been very willing to move. I usually say "Hi, I have a brain injury," and then point to my head and the seat. They get up, only occasionally with a confused look on their face.

Socializing With a Brain Injury

Socializing with PCS has been a challenge. I've taken a break from performing. Groups are tough because of the brain energy it takes to process multiple speakers. Shorter, one-on-one social settings in quieter environments work best for me. I tend to turn down larger social invitations.

Over the summer, one friend was confused when I couldn't commit to going hiking with them, which would have involved a car ride and possible overheating and vertigo. The friend had asked their sister, a neurologist, if I could do the trip post-concussion. When she said she thought it would be fine, it made it harder for my friend to believe me. Even many neurologists don't understand the PCS recovery process.

Another friend told me to have a more "positive outlook" when I shared fears about attending a future event. I couldn't help but reply, "Would you say 'just be positive' to somebody in a wheelchair?" While staying hopeful is important, it'd be dishonest to assume I'll be fine within a certain time frame.

On the flip side, many friends are understanding and patient. I went to a wedding recently, wore earplugs, and left early, and the bride understood. Another friend learned that jigsaw puzzles help with PCS recovery and gave me one as a gift. My family was in denial for a while because I looked fine. They've since come to accept the fact that concussion recovery is a major part of my life.

It's an ongoing challenge to determine if, when, and how to bring up PCS. Sometimes I speak up and advocate for accommodations. Other times I let it go because there may be no immediate fix, and I don't trust the other person to understand the condition.

Finding Support in the PCS Community

Fortunately, I discovered the PCS community. I've learned that 10 to 30% of traumatic brain injury sufferers develop PCS and that I am definitely not alone.

I've also found a whole world of fellow TBI victims posting about their journey, including the tools they use and the challenges they face. Through the PINK Concussions Facebook group, I even found a new physician.

Connections with friends, strangers, and professionals who understand PCS have made a massive difference in navigating this invisible illness. Before, I felt fairly alone in long-term concussion recovery. Now I hear stories every day from people on the same path. I still don't know how long I'll be grappling with symptoms, but I do have hope I can heal from this thing in time, even if nobody—including family, friends, physicians, and CT scans—can see it.

The important part is that I know this is real. I see myself and let PCS be visible to me, so I seek the help I need.

If you have a story to share about living with an invisible illness, email us at invisible@health.com

This Woman Had a Cavernous Angioma—a Life-Altering Condition Causing Migraines and Brain Bleeding
POTS Is an Illness Causing Fatigue, Rapid Heartbeat, and Nausea—Here's What It's Like to Live With It 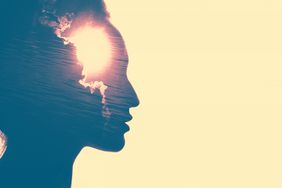 What is a Headache?
For 6 Years, Doctors Kept Telling Me I Had PMS—but It Turned Out to Be Brain Cancer