This woman had her first major seizure when she was 24. Doctors said it was caused by an adverse reaction to medicine, but as the seizures continued to strike, she began to suspect something more serious.

As a teen, I had dreams of joining the US Women's National Soccer Team. I was being recruited by Division I colleges from around the country. I was all in on my soccer career. Unfortunately, a series of concussions in high school sidelined those plans. Little did I know, but the concussions would have an even bigger impact on my life trajectory.

Fast forward to six years after high school. I was living the typical 20-something life. I had graduated college and was finishing up my master's degree in exercise science/rehabilitation. I was working a full-time job in a physical therapy clinic while also coaching Division III collegiate soccer part-time. I hung out with my friends and was chasing after all the dreams and goals that I had set for myself. Life was busy, and it was good.

But then the seizures started, and everything came to a screeching halt. My life as I knew it—and what I had imagined for it—had to be reevaluated.

My first grand mal seizure—the type of seizure that most people think of when they hear the word "seizure," when your whole body shakes on the ground and you loss consciousness—happened in 2009 when I was at my parents' house. We weren't sure why it happened or if it would happen again.

In the fall of 2010, when I was 24 years old, I had an even worse grad mal seizure—and it was this one that made me realize that my life would never be the same. I was taken to the emergency room and ended up in a coma for about three days. In the hospital, they put me on anti-seizure medication to help pull me out of the episode. When I came to, the doctors told me the reason they believed I had the seizure: it had been a reaction to an anti-nausea medication I was taking for a stomach bug. Medication side effects are totally plausible, so it seemed like a pretty logical explanation to me.

But the seizure had been a serious one, and the lingering effects were profound. As I resumed my usual routine I had short-term memory issues, extreme fatigue and weakness, significant headaches, trouble multitasking, and difficulty with simple tasks. The seizure marked the end of my coaching season. I was also forced to take a three-month break from my full-time job assisting physical therapists and their patients.

The seizure put my plans for my future on hold. I was supposed to start a doctoral physical therapy program that following fall, but my team of neurologists told me that I was still in a delicate state of recovery, and so I had to turn down the program.

My grand mal seizure left me with two thoughts: What is life going forward? And will this happen again?

A long road to diagnosis

My questions were soon answered: Life was going to be completely different going forward. And it would happen again.

I had another grand mal seizure two or three years later. And another one soon after that. Both episodes were again blamed on a reaction to different medication I was taking.

Between my grand mal seizures, I was experiencing episodes where I was conscious and aware but having aphasia, a disorder that made it difficult for me to speak for hours. Over time, the episodes got worse and happened more often—sometimes up to 50 times a day. These episodes could be incapacitating and left me exhausted.

My neurological team tried to figure out if these episodes were smaller seizures known as "focal seizures." But because my symptoms were so puzzling, especially the aphasia episodes, they were being very methodical and checking all the boxes when it came to giving me an official diagnosis.

Waiting for an answer was taxing, and I really needed a diagnosis. So in 2019 I found a different doctor in Ohio, where I moved to and now live. During my first appointment with him, I told him my story. He listened as I described my symptoms. "Absolutely, you have epilepsy," he said.

Epilepsy is a neurological disorder whereby brain activity becomes abnormal, causing seizures or periods of unusual behavior, sensations, and sometimes loss of awareness. But with my aphasic episodes—which did turn out to be focal seizures—I had a rare presentation of epilepsy, which made it so difficult for my original doctors to diagnose me.

Finding out I had epilepsy was a relief. Of course, epilepsy is a word you never want to hear. But getting the diagnosis was an acknowledgment that something was going on with me and that I had struggled. My neurologists later told me that it was the concussions I sustained as a high school soccer player that put me at an increased risk for epilepsy.

There was freedom in the diagnosis, and a weight was taken off my shoulders. I had answers, and now I could finally get the right help.

Early on after my first seizure, I had been on anti-seizure medications, though none ever really worked. Now that I had an official diagnosis, I was put on a different medication. That was a year and a half ago. With that new medicine's help, I haven't experienced any more seizures.

I'm now a 35-year-old stay-at-home mom with a 2-year-old son, and that freedom from seizures has given me the ability to advocate for others struggling with health issues—advising them to seek out another professional in a different city, for example. That's what I did, and where I'm at now in my epilepsy journey is certainly not where I was 10 years ago thanks to that change.

My advice for those who are undiagnosed and struggling is to keep talking to your doctors, don't be afraid to seek second opinions, know you're not alone, and find people and communities to connect with for support.

Another piece of advice I give that my own journey taught me? Be ready to take the time to find the right treatment or diagnosis. The process isn't always quick, so having a long-haul mindset can really help. For me, it took 10 years. But focusing on the long game helped me to never give up on finding the right diagnosis and treatment for me.

I consider myself someone who had a protracted diagnosis. For 10 years, doctors put off giving me a diagnosis as they tried to make absolutely certain that what I was experiencing was in fact caused by epilepsy. Being in that weird category of diagnosis limbo has taught me that it's important to find people who can push you toward the right providers. It makes all difference in your medical journey.

For people in that same category, I say this: There is light on the other side of whatever you are facing. It can be frustrating, challenging, and demoralizing, but there is always hope.

'I've Had Metastatic Pancreatic Cancer for 11 Years—Here's What It's Like Living With an Incurable Disease'
For 6 Years, Doctors Kept Telling Me I Had PMS—but It Turned Out to Be Brain Cancer 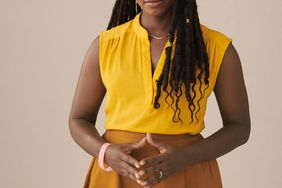