This chronic condition is not as common as other sleep disturbances, but it can severely alter someone's life.

Do you ever find yourself overcome with tiredness? Have you fallen asleep without warning or experienced sleep paralysis? These signs point to narcolepsy, a disorder in which people experience severe and persistent daytime sleepiness, says the National Institute of Neurological Disorders and Stroke (NINDS).

Narcolepsy can appear at any point in a person's life, the Institute points out, but it's most likely to occur in childhood, adolescence, or early adulthood.

There's also a third form of the disorder, known as secondary narcolepsy, which occurs due to an injury to the brain's hypothalamus region. In these cases, people have typical narcolepsy symptoms, along with other potential neurological conditions.

What are the symptoms of narcolepsy?

The number and severity of narcolepsy symptoms a person may experience varies widely. "There is a very extensive spectrum when only sleepiness may be present all the way to the full-blown phenotype with all the features including cataplexy, sleep attacks, sleep onset or wakening hallucination and cataplexy," David Gozal, MD, a sleep medicine specialist and pediatric pulmonologist at University of Missouri Health Care tells Health.

Narcolepsy is rarer than most other sleep disorders, affecting an estimated one in 2,000 people in the US, or roughly 200,000 Americans, per Narcolepsy Network, a nonprofit patient support group. It's estimated that only one in four people with this condition have been diagnosed and are receiving treatment, it says. It can also take longer to diagnose than other sleep issues, especially for individuals with type 2, and requires a sleep study.

Understanding exactly what the various symptoms of narcolepsy look (and feel) like can help you decide whether to seek medical attention But how do you know if you have narcolepsy or something else? We asked sleep specialists to describe the signs and symptoms that indicate that someone may be dealing with this disorder.

"Excessive daytime sleepiness is almost always the first noticeable symptom among people with narcolepsy," says Chelsie Rohrscheib, PhD, head neuroscientist and sleep specialist for Wesper, a New York-based company that makes sleep-analysis smart patches. It can feel like an overwhelming need to sleep during the day, and often appears during monotonous activities. In some cases, a person may have difficulty concentrating on tasks, and even fall asleep without warning. While some individuals may wake up feeling refreshed at first, the cycle eventually repeats.

For people with narcolepsy, simply being sleepy does not guarantee a particularly long or peaceful rest. According to Steven Thau, MD, division chief of the Pulmonary and Sleep Medicine Department and the medical director of the Sleep Center, Respiratory Therapy and the PFT Lab at Phelps Hospital/Northwell Health, people with narcolepsy typically sleep a similar amount to those without the condition. "They often either don't sleep well or have interrupted sleep. As a result, other sleep disorders such as chronic sleep deprivation should be ruled out first," Dr. Thau tells Health.

REM sleep is a deeper period of sleep, occurring a few times throughout the night. According to Michigan Medicine, it generally occurs one to two hours after a person falls asleep. However, people with narcolepsy are more likely to enter sleep directly through REM or dream sleep, says Dr. Thau. An increase in REM sleep affects what a person experiences while sleeping. "Both type 1 and 2 cause excessive REM sleep, so it's not uncommon to have REM-related side effects, such as excessive dreaming and nightmares," says Rohrscheib.

These are movements made or words uttered when a person is half asleep—and then has no memory of these things once awake, says Stanford Health Care. According to NINDS, automatic behaviors may occur when a person falls asleep for even a few seconds while engaging in activities, such as eating, talking, or driving. This can lead to dangerous situations—imagine operating a car without awareness.

What Is Sleep Paralysis? Why It Happens and What to Do About It

Then there are people who may experience the opposite of automatic behaviors—they are wide awake but unable to speak or move. Sleep paralysis "usually only lasts for a few seconds, but it seems much longer for the patient. It's terrifying since it's difficult to breathe while paralyzed," says Dr. Thau.

Cataplexy is the defining symptom of type 1 narcolepsy and is characterized by sudden episodes of muscle loss. A person might have weakness in a few muscles for a couple of seconds, says NINDS. In severe cataplexy episodes, it might involve "focal weakness, such as facial drooping, eyelid lagging, loss of grip or buckling of the knees," says Dr. Thau. These instances may last for a few minutes. Intense emotions—be they positive or negative—such as anger or excitement, can trigger cataplexy, says Dr. Thau.

According to the Mayo Clinic, the frequency of cataplexy varies tremendously case by case. While some people may have multiple episodes a day, others may only experience cataplexy once or twice a year.

For anyone who has experienced one or more of these symptoms, a medical professional, such as a neurologist or sleep medicine specialist, can determine if they stem from narcolepsy. If symptoms of sleepiness are "interfering with a person's quality of life, ability to maintain a job, or endangering that person's life due to a risk of falling asleep behind the wheel," get immediate medical treatment, says Dr. Thau. 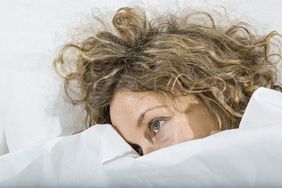 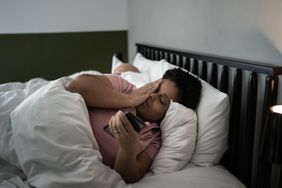 7 Types of Insomnia: What You Should Know About Each One

Sleeping With a CPAP Machine for Sleep Apnea 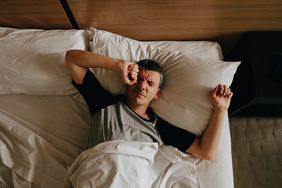