OB-GYNs weigh in about what might happen to your period after you stop using birth control.

If you're on the Pill or any kind of hormonal birth control, you likely don't give your period all that much thought. Steady doses of hormones in certain contraceptives help regulate your cycle, meaning you know just when to expect your period (aka, your "withdrawal bleed," more on that below) every single month, and it's probably a lot shorter and easier than before you began taking birth control.

But when you go off birth control? You might start to wonder not only when you're going to get your "real" period back but also what it'll be like after not getting it for months or years. Most people who stop taking the Pill can expect their first period to return relatively quickly, within a month or so. Your menstrual cycle will likely return to how it was before birth control.

Here, OB-GYNs outline some side effects you can expect from your period when you go off birth control, like the Pill, the ring, the patch, and more.

You Likely Won't Gain or Lose Any Weight

If you believe birth control leads to weight gain, you need to know that the opposite isn't necessarily true: Going off of birth control likely won't help you lose or gain weight. According to a 2014 Cochrane Database of System Reviews article of 49 relevant trials, the birth control pill did not appear to have a major impact on weight.

″There has been no definitive evidence showing that starting—or stopping—birth control will affect your weight," Neha Bhardwaj, MD, assistant professor of obstetrics, gynecology, and reproductive science at Icahn School of Medicine at Mount Sinai in New York City, previously told Health. (One exception: Progestin-only birth control injections may cause weight gain in some individuals.)

You Could Get More Headaches

Headaches—migraines in particular—can be one of the effects of having a period. Approximately 78% of women reported their period to be a trigger for migraines, in a Cephalalgia study published in 2020.

Certain birth control methods let you skip periods or go longer between them, such as extended-cycle pills, and may prevent migraines. For individuals who have periods, stopping the use of birth control could cause their headaches to become more frequent.

You May Bleed a Few Days (or Months)

If you stop taking a combination hormonal birth control pill—which has both estrogen and progesterone—some tissue sheds off, which can cause a light bleed, Alyssa Dweck, MD, an OB-GYN and author of The Complete A to Z for Your V, told Health. This is also why you get a "fake" period on the Pill during the week you take the placebo pills, she explained.

Think that because you've been on birth control for 10 years it's going to take forever to get your period back? That might not be the case.

"Generally, the side effects of the Pill and the impact on suppressing the hormone pathways are rapidly reversible," Samantha Kempner, MD, an OB-GYN and an assistant professor at the University of Michigan Medical School, told Health. "Even with long-term use of the combination birth control pill, most women can expect to resume 'normal periods' quickly."

Still no period after three months? See a healthcare professional—they may want to check for issues like a thyroid condition or hormonal imbalances that could be keeping your period MIA.

Think back: Why'd you go on birth control in the first place? Maybe it was simply because you were having sex and did not want to get pregnant. But many people start using hormonal contraceptives to help regulate an otherwise irregular cycle or control a condition like polycystic ovary syndrome (PCOS), which causes infrequent ovulation and an erratic cycle.

Your Period Could Also Be Totally Different

The other side of that: If you've been on birth control for years, your age, medical issues, stress levels, diet patterns, or exercise habits may have changed over time and could influence what your period looks like when you come off of birth control, Dr. Dweck said.

Say, for example, that you developed a thyroid abnormality while you were on birth control. You might notice your period is more irregular than you remember because of that. "Your period may be different when you come off the Pill than it was before you went on, but that's completely unrelated to the Pill itself," Dr. Dweck said.

You Can Get Pregnant Before You Even Get Your Period Again

When your body realizes you've stopped taking birth control (which Dr. Dweck added is usually immediately), you might begin to ovulate, which means you can get pregnant right away, she added.

Researchers of a Korean Journal of Family Medicine study published in November 2021 investigated the relationship between certain types of birth control and mood. They found that individuals were at a greater risk for developing mild depression when using injectable combined contraceptives (birth control that is administered via a shot) or oral contraceptives over the course of a six-month period.

Thus, just as being on birth control can alter the way you feel, so might stopping its use. It may be possible that a person could see depressive or other mood-related symptoms go away after stopping birth control.

At the same time, a person's mood may not improve if they stop taking birth control. One case where this might occur is if someone has been diagnosed with premenstrual dysphoric disorder (PMDD).

The authors of a June article published in An Independent Review indicated that regularly taking active pills in an oral contraception pack has the potential to offer depressive-symptom relief for individuals diagnosed with PMDD. This suggests that the discontinuation of birth control could result in an increased instance of depressive symptoms.

Your Acne Could Return

A lot of people take birth control pills to ease acne, but unfortunately, once you stop taking them, the acne could return. ″Going off birth control pills may return acne symptoms to what they were before starting [birth control],″ Dr. Bhardwaj previously told Health. If you're worried about hormonal acne, talk to a dermatologist about alternatives, one as simple as switching your skincare products.

You May Have Some Hair Loss

If you dealt with hormonal-related hair loss (as a symptom of polycystic ovary syndrome, for example) before you went on birth control, going off of birth control might bring it back. This switch could trigger telogen effluvium, a temporary condition that causes your hair to shed.

You Could Lose Some Vitamin D

An August 2016 study in the Journal of Clinical Endocrinology & Metabolism found that the participants in the study experienced a drop in vitamin D levels when they stopped taking birth control pills.

This is especially problematic for individuals who are trying to conceive since vitamin D helps support the fetal skeleton in pregnancy. When talking to a healthcare provider about going off birth control, ask about ways to increase your daily vitamin D intake.

You Could Experience Breast Tenderness—Again

Many individuals report achy breasts before their period, thanks to the spike of progesterone that stimulates breast milk glands. Birth control can be used to treat breast tenderness, so going off it could bring the sensitivity back.

However, breast tenderness can also be a side effect of being on birth control, Guirlaine Agnant, MD, chair of the department of obstetrics and gynecology at Montefiore Mount Vernon Hospital in Mount Vernon, New York, previously told Health.

So if you were dealing with tenderness while on birth control, ″stopping [it] will bring back normal breast tissue, and no tenderness should be experienced,″ Dr. Agnant added.

Your Sex Drive Could Spike or Drop

What Else To Know About Stopping Birth Control

Stopping your birth control will depend on the type of birth control you use, but you'll want to speak to a healthcare professional first.

For oral contraceptives, you can simply stop taking them at any point in the pack. However, if you want to try to keep yourself on a regular schedule, you can stop after you've finished the last pill in the pack. The same is the case for contraceptive patches or rings: You can remove them at any time. Also, intrauterine devices (IUDs) and implanted rods must be removed by a healthcare professional, the NICHD says.

Ultimately, if you have any questions or concerns in regard to your birth control—if you want to discontinue them, switch them, or not—consult a healthcare professional for help. 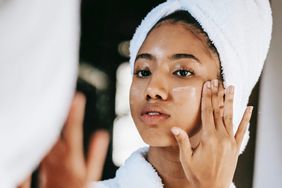