Reasons why your period is erratic or missing altogether—and what to do about it.

Wouldn't it be great if you could circle a date on your calendar and have your period show up then? Unfortunately, a slight variation is typical.

"The average cycle is 28 days—that's 28 days between the first day of one period and the first day of your next period—but anywhere in between 24 and 31 days is considered normal," said Veronica Lerner, MD, Director of Simulation in the Department of Obstetrics and Gynecology at Lenox Hill Hospital. "Still, a highly irregular period is usually a sign that something else isn't right in your body."

Take note of these 10 things that could be messing with your menstrual cycle, and see your healthcare provider if anything seems too far off.

Have you heard of marathon runners losing their periods? It's not a myth: Frequent rigorous exercise puts stress on your body, and this stress tells your brain to stop producing reproductive hormones, according to an article published in January 2020 in the Journal of Clinical Research in Pediatric Endocrinology.

"Since you can't nourish a baby under extreme stress, your body temporarily shuts down the production of fertility hormones," Dr. Lerner explained.

"It's a condition called amenorrhea, and it can compromise your bone density long-term," Dr. Lerner said.

Amenorrhea is the absence of a period often caused by stress, weight loss, or frequent exercise, according to a January 2020 article published in the Journal of Clinical Research in Pediatric Endocrinology.

Estrogen is produced mainly from adipose tissue (the tissue that makes up fat) after menopause, according to a review published in 2019 in the Journal of Steroid Biochemistry and Molecular Biology.

This means that when levels of fat in the body increase, estrogen levels also increase. "Excess fat cells result in elevated levels of estrogen, which can ultimately stop your ovaries from releasing an egg," Dr. Lerner said.

According to a review published in July 2016 in the Journal of Molecular Endocrinology, having too much estrogen for an extended period of time can also increase your risk of breast and endometrial cancer. However, going on the pill may help. Oral contraceptives have been associated with lowering the risk for endometrial cancer, according to a study published in December 2020 in the European Journal of Epidemiology.

6 Self-Care Habits That Ease PMS Symptoms, According to Gynecologists
03 of 10

Your body has the opposite reaction when you lose a lot of weight at once; it doesn't produce enough estrogen, according to an article published in January 2020 in the Journal of Clinical Research in Pediatric Endocrinology.

"And you need adequate levels of estrogen to build your uterine lining and have a period," said Holly Puritz, MD, medical director of OB/GYN services at Sentara Leigh Hospital. "You're more likely to notice a difference if you've lost a significant amount of weight in a short period of time."

Breast Soreness Before a Period—Why Does It Happen?
04 of 10

Feelings of stress can delay your period.

According to a study from March 2015 in the Journal of Clinical & Diagnostic Research, people who were experiencing high levels of stress were also experiencing irregular periods.

"Evolutionarily speaking, times of high stress aren't conducive to bringing a baby into the world, and a regular cycle is designed to do just that," Dr. Puritz said.

10 Facts About Periods Everyone Should Know
05 of 10

Issues with the thyroid—a gland in your neck—can affect the regularity of your period, according to an article published in November 2020 in Evolution, Medicine, and Public Health. For those with an overactive thyroid gland—meaning they produce too much thyroid hormone—their periods tend to be shorter and occur more frequently. The opposite is true for those who don't make enough thyroid hormone and have an underactive thyroid. Their periods tend to be less frequent.

Hormones don't act in isolation. "All hormones circulate throughout your bloodstream, so they're all connected, even if they're produced in different glands," Dr. Puritz said.

Don't panic if your cycle is a couple of days off, but see your healthcare provider if your period is consistently late or early by more than one week.

In a study published in January 2021 in the Journal of Occupational and Environmental Medicine, participants were exposed to pesticides from working and/or living on farmland. Most participants were exposed to endocrine-disrupting chemical pesticides, a type of pesticide known to cause menstrual irregularities. Participants reported irregularities in the length of their cycle as well as the absence of their period for more than 90 days.

"Pesticides mimic hormones," Dr. Puritz said. "They compete with and block the hormones in your body, making it difficult for your endocrine system to function properly."

Dr. Puritz suggested limiting your exposure any way you can: "Even choosing organic food at the supermarket helps."

While you probably expect your period to become less frequent as you approach menopause, it can throw some surprises at you. Thanks to shifts in your hormones, your cycle gets shorter before it gets longer, explained Samantha Butts, MD, associate professor of obstetrics and gynecology at Penn State College of Medicine.

"Then, at a certain point, the number of eggs in your ovaries declines such that your periods are infrequent," Dr. Butts said. That means you'll need to put up with more frequent periods before you can start saying goodbye for good.

Skimping on sleep can make you feel off, but subpar slumber patterns can throw off your cycle, too, according to an article published in November 2016 in Current Sleep Medicine Reports.

If you're stuck working the night shift, Dr. Baker suggested using blackout curtains and earplugs to help you sleep well when it's light out.

Your brain produces the hormone melatonin to signal to your body that it's time to go to bed, according to the National Center for Complimentary and Integrative Health. But when you travel to another time zone, your body releases melatonin as if you're still at home, even if it's broad daylight in your new location, according to an article published in July 2019 in Frontiers in Physiology.

To adjust to the new schedule, your body suppresses the hormone until it's dark again. These fluctuations aren't good for your flow: "It's probably not a big deal if you're traveling once in a while, but these adjustments may throw off your cycle if they're happening regularly," Dr. Baker said.

Despite all the possible causes of irregular periods, there is something that can regulate your period.

Oral contraceptives are often used to regulate periods. "Many people go on birth control pills to make their periods regular," Dr. Lerner said. "But it takes your body a few months to adjust."

The pill typically contains two hormones: estrogen and progestin. These hormones prevent the ovaries from releasing an egg, according to MedlinePlus. "The pill stabilizes the lining of your uterus, but the lining needs a steady supply of hormones in order to stay put," Dr. Puritz said.

If you are experiencing irregularities in your menstrual cycle, you might want to ask your healthcare provider about going on the pill.

Going Off Birth Control: 11 Ways Your Body Could Change
Was this page helpful?
Thanks for your feedback!
Tell us why!
Related Articles 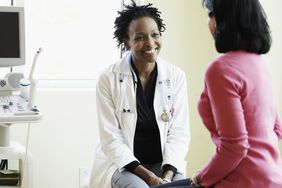 8 Reasons You're Spotting Between Periods

What Every Woman Needs to Know About Uterine Cancer, Now That It's on the Rise
Two Periods in One Month: How Does This Happen?