When Does Menopause Start—And How Long Does it Last?

FYI: It's different for everyone.

Menopause is one of thosethings everyone knows about on some level, but few actuallytalk about.As a result, it can lead to a lot of questions and misconceptions.

Take when menopause actually starts, for example: Many people know when they (or their mothers) went through menopause, but that can amount to many different answers (because, you know, every body is different). The same goes for how long menopause actually lasts.

Health spoke to a few different ob-gyns to get a better understanding of when menopause actually starts, how long it lasts, and what you can do to help the transition—because the only thing worse than suffering through night sweats is not knowing how much longer you'll have to deal with them.

LINK: Gwyneth Paltrow Reveals She Has Premenopause Symptoms at 46: I’m 'Suddenly Furious for No Reason'

What is menopause, again?

Menopause is a normal part of aging, and it’s actually a point in time 12 months after a woman’s last period, according to the National Institute on Aging (NIA). During the years leading up to that point, a woman may have changes in her monthly cycle, hot flashes, and other symptoms. This is called the menopausal transition or perimenopause.

“During perimenopause, the number of eggs in a woman’s ovaries start to dwindle down to a precious few,” says Jonathan Schaffir, M.D., an ob/gyn from The Ohio State University Wexner Medical Center. “Since ovulation, or the release of the egg, triggers periods, once the eggs dwindle, menstruation spaces out and then stops completely.”

During perimenopause, the body's production of estrogen and progesterone (two hormones that are made by the ovaries) vary, the NIA explains. A woman’s bones become less dense, and her body starts using energy differently. Fat cells also change and women may find that they gain weight more easily than they did before.

While menopause typically happens naturally as a woman ages, it can also happen if a woman has her ovaries surgically removed, says Arianna Sholes-Douglas, M.D., author of The Menopause Myth: What Your Mother, Doctor, And Friends Haven’t Told You About Life After 35, and the founder of Tula Wellness Center in Tucson, Ariz. “Symptoms can also occur even if a woman has her uterus removed but leaves her ovaries intact,” she adds.

5 Reasons Why Some Women Go Through Early Menopause

When does menopause usually start?

Every woman is different, but the menopausal transition usually starts between ages 45 and 55, per the NIA. Some women can start as early as 35, while others may not start it until they’re 60, says Mary Jane Minkin, M.D., M.D., a clinical professor of obstetrics and gynecology and reproductive sciences at Yale Medical School.

“Family history is a reasonable predictor,” she says. “If everyone in the family went through menopause on the early side, there is a good chance you may, too.”

When you got your first period could also help predict when you'll experience perimenopause. According to a 2017 study in the journal Human Reproduction, women who started their menstrual periods at 11 years old or younger had an 80% higher risk of hitting menopause before the age of 40, compared those who got their first period at 12 or 13 years old.

What Are Hot Flashes—And Why Do They Happen During Menopause?

How long does menopause last?

So, the menopausal transition is not a quick process. It usually lasts about seven years, but it can take as long as 14 years, the NIA says.

What are the symptoms of menopause, and what can you do about them?

During perimenopause, women will usually notice irregular periods. “Close together, far apart, heavy, light—you name it,” Dr. Minkin says, along with hot flashes, vaginal dryness, incontinence, a lack of interest in sex, and trouble sleeping, per the NIA.

In general, the symptoms of perimenopause can be eased by estrogen therapy. “That’s the first-line treatment,” Dr. Schaffir says. “It really is quite safe [and] it will help with just about everything,” Dr. Minkin says. Low-dose birth control pills, for example, can be “quite helpful,” Dr. Minkin says, adding that those who struggle with heavy bleeding can benefit from a progesterone-coated IUD.

For women who don’t want to undergo estrogen therapy or who can’t for health reasons, Dr. Schaffir says that doctors will typically offer the anti-depressant paroxetine (aka Paxil), which can help relieve some menopausal symptoms.

There are other options that can help, like over-the-counter remedies Remifemin (German black cohosh), Relizen (Swedish pollen extract), and Femarelle (an over the counter soy extract product) for hot flashes and sleep issues; vaginal moisturizers Replens and Revaree for vaginal dryness; testosterone therapy or an over-the-counter product called Ristela, which increases pelvic blood flow to help with low libido; and good nutrition and exercise to help with everything else, Dr. Minkin says. Meditation and yoga in the evening, decreasing your caffeine intake so that you are caffeine free by 3 p.m., watching how much sugar you eat, and trying to avoid drinking before bed can also help with sleep issues, Dr. Sholes-Douglas says.

If you think you may be going through perimenopause or your menopausal transition, or have already hit menopause, talk to your doctor. They should be able to answer any specific questions you may have and guide you on next steps.

Having Regular Sex Can Delay Menopause, According to a New Study

Getting Pregnant After Menopause—How Likely Is It To Happen?

The Beginning of the End: Is There an Upside to Perimenopause?

What Are the Benefits of Progesterone Pills? An Ob-Gyn Explains 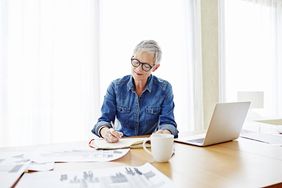 5 Things You Need to Know About Menopause