Bleeding under the skin that produces a blotchy or pinprick-like rash may signal a serious bacterial infection.

If you notice a strange rash that looks like pink or purple pinpricks on your body, don't ignore it. According to the Meningitis Research Foundation, a rash can be a telltale symptom of bacterial meningitis, a potentially life-threatening condition.

"[Bacterial meningitis] causes a very severe inflammation in and around the brain," said Frank Esper, MD, pediatric infectious disease specialist at Cleveland Clinic Children's Hospital. "And anytime you are messing with the brain, it's a bad, bad problem."

Still, a rash can be caused by a number of things, including less serious health conditions, chemicals, cosmetics, dyes, and poison ivy, according to Penn Medicine. Read on to find out more about bacterial meningitis and how you can tell if you have a meningitis rash.

What Is Bacterial Meningitis?

The disease happens when certain bacteria infect your cerebrospinal fluid and cause severe swelling in a group of membranes known as the "meninges," which protect the brain and spinal cord, according to Nemours Children's Health.

According to the Centers for Disease Control and Prevention (CDC), the bacteria that cause meningitis can be transmitted in a variety of ways, including from mother to infants during birth, through spit (such as when kissing or coughing), or consuming food prepared by someone who didn't wash their hands properly after going to the bathroom.

Bacterial meningitis is considered more dangerous than viral meningitis, which is more common and often clears up on its own without treatment, notes the CDC. Bacterial meningitis, on the other hand, can progress quickly and become deadly in as little as a few hours. According to the CDC, those who recover may be left with long-term disabilities, including hearing loss, brain damage, and learning disabilities.

While many types of bacteria can cause meningitis, three types are responsible for the majority of cases, according to the National Organization for Rare Disorders (NORD), including:

It's that last one—meningococcus—that tends to cause the meningitis rash, according to the Meningitis Research Foundation. "Meningococcus is probably the one that keeps most physicians up at night," said Dr. Esper.

According to the CDC, about one in 10 people carries the meningococcal bacteria in their nose or throat without getting sick. But they can still spread the bacteria to others through close contact or respiratory secretions, resulting in infection.

The risk tends to be highest among infants and college students, according to the CDC. "When all the students get together and they're living in close quarters, going partying, it increases [transmission] rates," said Claire Wright, evidence and policy manager at the Meningitis Research Foundation.

Anyone is susceptible to bacterial meningitis, however, and should seek immediate medical attention if they're experiencing symptoms, such as a meningitis rash.

Meningitis rashes can be tricky to identify because they can look different from person to person. The Meningitis Research Foundation describes two different types of meningitis rashes: the "petechial" rash, which appears as red or purple pinpricks that can look like flea bites, and the "purpuric" rash, which looks more like a bruise and shows up as reddish-purple blotches on the skin.

While a meningitis rash can show up anywhere on your body, it often starts on the arms, legs, or trunk, according to NORD. The colored spots may also appear scattered in clusters where pressure occurs (like around the waistband of your underwear or your socks), according to the Meningitis Research Foundation.

It's also worth noting that the so-called meningitis rash isn't really a rash but rather, bleeding spots under the skin. This happens when a pathogen (usually Meningococcal bacteria) enters the bloodstream and damages blood vessels and organs, according to the Meningitis Research Foundation.

If a meningitis rash spreads quickly, it could be a sign of a severe case that requires emergency care. According to the Meningitis Research Foundation, as the infection progresses, a person's blood vessels can leak. The body will respond by clotting the blood vessels to try to stop the bleeding. But this can cause the hands, feet, and other body parts to be starved of oxygen, leading to severe scarring and a potential need for amputation.

How To Tell if a Rash Is Meningitis

Hint: A drinking glass can help. Here's how to use it to distinguish a meningitis rash from other types of rashes.

One way you can potentially tell if you have a meningitis rash is with the "tumbler test," according to the Meningitis Research Foundation. Also known as the "glass test," it involves pressing a clear glass tumbler (like the kind you probably have in your kitchen cabinet) firmly against the rash.

"If it doesn't fade [and] you can still see the rash through the glass, then that would be considered a medical emergency, and you should get that person to the hospital as soon as you can," said Wright.

Rashes that disappear when pressed are considered "blanching" rashes. The meningitis rash starts this way but almost always evolves into a "non-blanching" rash, according to the Meningitis Research Foundation. The rash can appear differently on different skin types. And in some cases, a person with the disease never gets a meningitis rash, which is why it's important to be aware of other symptoms and seek medical care if someone is suspected of having meningitis.

What Are the Symptoms of Bacterial Meningitis?

A rash is just one of a number of symptoms caused by bacterial meningitis. "People who have meningitis all come with similar symptoms," said Dr. Esper. "You have a tremendous headache, the light bothers your eyes, sounds bother your ears because your brain is just so agitated that any stimulus just really causes pain."

According to the CDC, bacterial meningitis can also cause:

Bacterial meningitis symptoms can differ among newborns and babies, though. For infants, the CDC suggests looking for symptoms like:

That damage comes as a result of toxins released by the bacteria, which can weaken the capillaries, or blood vessels, allowing blood to seep out, leading to the meningitis rash, according to the Meningitis Research Foundation.

How To Prevent Bacterial Meningitis

"The most important thing you can do is get the vaccines that are available," explained Wright.

While meningitis vaccines offer strong protection, no vaccine (for meningitis or any other disease) works 100% of the time. The CDC recommends practicing other healthy habits to protect yourself and others from bacterial meningitis, including:

Bacterial meningitis is a dangerous illness. According to the National Meningitis Foundation, between 600 and 1,000 people contract the meningococcal disease each year. Of those who get it, 10-15% die, and one in five who survive will live with permanent disabilities including brain damage, hearing loss, or amputations. Hence why it's important to recognize the symptoms, like a rash, and take the necessary steps to prevent the spread of bacterial meningitis. 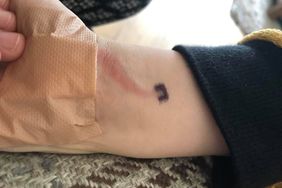