This type of inflammation, often caused by infection or injury, affects the protective layer of tissue covering the brain and spinal cord. If a bacterial infection is suspected, treatment must begin immediately.

Bacterial meningitis is a serious, sometimes lethal infection that can strike without warning and become very serious within hours. However, most cases of meningitis that occur in the US are not caused by a bacterial infection but by a virus, including herpes, HIV, mumps, and West Nile virus. Meningitis cases caused by these and other viruses are usually mild and go away on their own—although they can still cause symptoms like fever, headache, and stiff neck.

The word meningitis might bring to mind scary news stories about sick infants or outbreaks on college campuses. These scenarios do happen, but meningitis doesn't always make headlines or cause life-threatening complications.

While most meningitis cases treated in US hospitals are caused by a viral infection, bacterial meningitis, the more serious type, can result in death or permanent disability. Thousands more became very sick or developed long-term health problems.

There are several different types of meningitis, and some are much more dangerous than others. Here are the four types, as defined by the US Centers for Disease Control and Prevention:

1. Bacterial. This is caused by bacteria, can be deadly, and requires immediate medical attention. There are vaccines available to protect against some kinds of bacterial meningitis.

2. Viral. This is serious but not as serious as bacterial meningitis. You will usually get better on your own and there are vaccines available to prevent this form of meningitis.

3. Fungal. This is rare but derives from inhaling spores from the environment, such as contaminated soil or animal droppings that then enter the bloodstream and spread to the spinal cord and brain. This is uncommon in the United States, but people with weakened immune systems are at an increased risk of developing this.

4. Parasitic. This is quite rare but can occur if you eat contaminated food or accidentally ingest contaminated animal feces. Parasitic meningitis is not contagious from person-to-person.

Finally, there are certain types of meningitis that aren't caused by an infection at all. Rather, they can occur when inflammation happens as a result of a physical trauma—like brain surgery, or a serious blow to the head—or a chronic disease, like cancer, lupus, or rheumatoid arthritis. Certain drugs can cause inflammation of the meninges, as well. These types of meningitis are referred to as non-infectious meningitis. 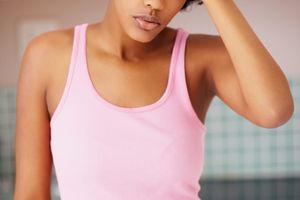 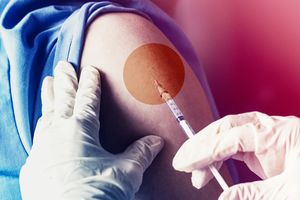 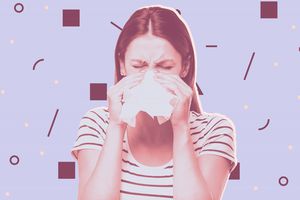 Usually, meningitis occurs when a virus or bacteria infects the brain, spinal cord, or the meninges themselves. Your immune system will then try to fight these infections by triggering an inflammatory response, which, in turn, causes the meninges to swell and push against the brain and spinal cord.

The onset of meningitis symptoms usually includes fever, vomiting, headache, and feeling unwell. Pain, pale skin, and cold hands and feet can occur next, followed by a stiff neck, confusion, and a sensitivity to light.

Many types of bacteria can cause swelling around the brain and spinal cord, but some of the most common are Group B Streptococcus, Streptococcus pneumonia, Listeria monocytogenes, Escherichia coli, and Neisseria meningitidis. These bacteria can be passed from mothers to babies during birth, between people via coughing, sneezing, or kissing, or by eating contaminated food. Living in close quarters (like a college dorm or military barracks) can increase the risk of contracting bacterial meningitis because people are exposed to more bacteria.

In adults, bacterial meningitis can be caused by streptococcus pneumoniae, the same bacteria that causes pneumonia and sinus infections.

Older adults, pregnant women, and people with weakened immune systems are also at increased risk of developing meningitis from listeria, a type of bacteria found in certain cheeses, cold cuts, and processed meats.

And while Neisseria meningitides isn't common among adults in the US, it is prevalent in other parts of the world, including sub-Saharan Africa. People of all ages planning travel to this area should talk with their doctors about getting vaccinated before they go.

When doctors suspect meningitis, they may order an X-ray or computed tomography (CT) scan to look for signs of inflammation around the brain and spinal cord. Blood tests may also be used to identify bacteria or other microorganisms that might be responsible for the infection.

A definitive diagnosis of meningitis, however, requires a spinal tap: a procedure in which a doctor inserts a needle into a patient's back to collect a sample of cerebrospinal fluid. The levels of glucose, protein, and white blood cells in this fluid can indicate how much inflammation is present. It can also help doctors determine the cause of meningitis, whether it's bacterial, viral, or something else.

Antibiotics won't work for meningitis that isn't caused by bacteria. Fungal meningitis can be treated with anti-fungal medications, usually given via IV in the hospital. Treatment for viral and parasitic meningitis is trickier: There are no medications that target the source of these infections, so treatment is mostly focused on addressing symptoms like pain and fever.

Some causes of meningitis are contagious, and others aren't.

Bacterial meningitis can be passed from one person to another. Mothers can pass meningitis-causing bacteria to babies during childbirth and people can pass it to each other by kissing, but other cases of meningitis, like those caused by inflammation that stems from physical trauma, aren't contagious.

So strictly speaking, you can't "catch" meningitis—since it's technically swelling around the brain and spinal cord—but exposure to bacteria that cause meningitis can put you and those around you at risk.

Because meningitis can be difficult to identify and diagnose in a timely manner, vaccinating against the disease is extremely important.

Children should receive a meningococcal conjugate vaccine at age 11 or 12, and a booster shot at age 16, to protect against four types of bacteria (serogroups A, C, W, and Y) that cause meningitis. Teenagers heading off to college may also choose to receive another shot, called the Serogroup B meningococcal vaccine, to protect specifically against meningitis B.

Even though adults can be hit hard by each type of meningitis, vaccines aren't recommended—unless an adult is at a higher risk due to pregnancy or a weakened immune system, for example. 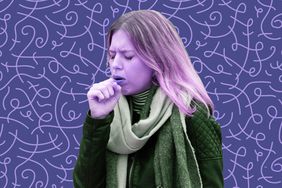 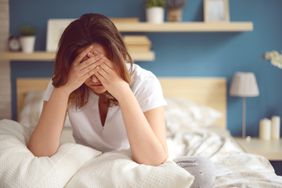