This Influencer's Birthmark Turned Out to Be Melanoma: 'I Could Feel It Growing'

Jenna Colgrove, 33, noticed the birthmark near her ankle looked strange. Weeks later, she was diagnosed with melanoma, the deadliest form of skin cancer.

I've had a birthmark just above my right ankle for as long as I can remember. But earlier this summer, I noticed it had changed shape. There were now multiple circles inside the spot, and one of the edges was cloudy. For the first time, I could also feel the birthmark. I could feel it growing; it was a weird sensation that I'm not sure how to describe.

I already had a meeting scheduled on July 13 with a dermatologist to test a custom skin serum for my work. At that visit, the doctor pulled out a small device and started analyzing sections of my bare skin. While he was looking at a freckle on my lip, my husband, who came with me, pointed out the spot on my ankle. The dermatologist took a look and immediately said I should have it biopsied.

I won't lie, I was nervous about the biopsy. I was scared of what the results might be. Somehow, I just knew they were not going to be positive. I went back to the same dermatologist on July 27. First he did a full-body scan of my skin from head to toe, making sure there was no other potentially dangerous spots. He did a visual exam without any instruments and then if anything concerned him, he'd view it more thoroughly through a handheld device.

For the biopsy itself, he had me lie flat on a table, then numbed the birthmark and cut it out of my skin. The procedure was quick, but my leg looked like a miniature shark had taken a bite out of it.

All 5 Stages of Melanoma, Explained by a Dermatologist

When I received the bad news about a week after the biopsy, I was shocked. I had melanoma, the least common yet most dangerous of the three forms of skin cancer. A telltale sign of melanoma is a mark or spot that has changed color or shape, just as my birthmark had. (Melanomas can also look like a bruise that doesn't heal or a dark streak under a finger or toenail, or simply be a spot that looks unusual or weird.)

The doctor called me himself to tell me, and he asked if I had any questions. I was at work and managed to ask a few things, but I could barely formulate a thought. My worst fear had come true.

I texted my husband simply, "it was melanoma" right after the call. He came to my workplace immediately to make sure I was okay, and from there he took the lead on all the doctor calls and follow-ups, asking questions when I couldn't. We set up an appointment a week later to have the melanoma removed by a surgical oncologist.

When we went to the oncologist's office for the consultation, the doctor was able to calm some of my anxieties. My spot was superficial spreading; it wasn't very deep under the skin. The melanoma was also stage one, which is much more curable than a later stage. The margins had been clear on my biopsy, meaning they had likely removed the cancer with the original cut. However, standard procedure requires they remove a centimeter-long base around each edge, so we would still go through with the surgery.

Finally surgery day came. I was sedated, but I later found out that it went smoothly. The surgeon took a 5-inch piece of skin from my upper thigh near my groin and grafted it onto my ankle, to cover the skin that was cut out to make sure all of the melanoma was gone.

Now that the surgery is over, I mainly feel frustrated. I'm usually a very active person, and now I can't move by myself. I'm on crutches, I can't go to work, and I've been in my apartment for the last four days straight. There's some pain on my ankle where the spot was and on the site for my skin graft, but at least I've been able to stop taking the pain medications. (I don't like the drowsiness or the risks that come with taking long-term narcotics.)

I have bandages wrapped around the surgery site, and I'm just hoping things are healing. I'll go back in to see the surgical oncologist and the plastic surgeon in about a week to find out. Once I'm pronounced cancer-free and the skin has healed, I will need to see the dermatologist for a skin check every three months for the next two years, and then every six months for two years. After that, I'll only go once every year.

I Was Diagnosed With Melanoma at 27 After Years of Tanning

My personal service announcement to everyone is to get a regular full-body skin scan by a dermatologist. Finding something early on, before it's even cancer, makes the problem a lot easier to address.

I've realized that there's a certain level of unawareness when it comes to skin cancer. I think everyone knows to wear sunscreen in the sun, but not everyone understands the different types of skin cancer, how it can develop, and how serious melanoma really is. I'm grateful that this experience has enabled me to have these conversations about skin cancer and to encourage people to get checked.

For more real talk on everything health and wellness, subscribe to Health's WomenIRL newsletter

Skin Cancer and Pregnancy: What Every Woman Should Know 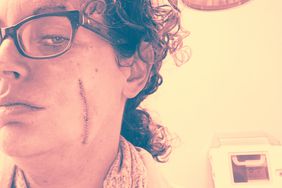 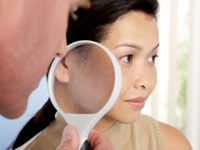 More Than Just a Mole? Why You Need to Get Your Skin Checked

This 24-Year-Old Thought the Tiny Spot Under Her Eye Was a Pimple. It Turned Out to Be Skin Cancer