If you’re traveling to a malaria-endemic country, make sure to prepare in advance. As many as 2,000 people in the US are diagnosed with this potentially deadly disease each year, mostly people returning from travel.

Malaria is a serious and possibly fatal disease caused by a parasite that typically infects a certain type of mosquito, according to the Centers for Disease Control and Prevention (CDC). However, though malaria can be a deadly disease, it's usually possibly to prevent illness and death from it, and the vast majority of cases in the United States stem from travelers returning from parts of the world where malaria is present, including sub-Saharan Africa, South America, and South Asia.

Malaria presents with high fevers, shaking chills, and flu-like symptoms. About 2,000 cases of malaria are diagnosed in the US annually, according to the CDC. Public health experts remain focused right now on the current uptick in malaria cases worldwide. According to a 2018 report from the World Health Organization, malaria cases have risen significantly in 13 countries, and increased by two million cases—from 217 million to 219 million—between 2016 and 2017.

One of the dangers of malaria is that it can look—at first—like a more common illness, such as the flu. Chills, fever, sweats, fatigue, headache, vomiting, nausea, and body aches are all symptoms of malaria. If left untreated, malaria can cause anemia and jaundice (a yellowing of the skin and eyes) because of the loss of red blood cells, and can lead to kidney failure, seizures, mental confusion, coma, and even death.

It's important to note that symptoms can appear as soon as 10 days or as late as one year after being exposed to the disease, according to the CDC. You should be on the lookout for these flu-like symptoms if you've traveled to a country in which malaria is present, and if you experience them, it's time to see a doctor right away, since malaria can very rapidly become serious, per the CDC. 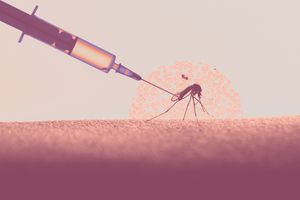 Malaria is transmitted from female Anopheles mosquitos to humans through mosquito bites. A mosquito that is infected bites an individual, transmits that parasite into this new person's body, and that person gets sick.

Malaria isn't considered a common concern if you live in the US. However, again, if you travel outside of the country, you can quickly be exposed to the potentially deadly disease. Worldwide, 3.2 billion people (about half the world's population) are at risk of contracting malaria, according to the National Institute of Allergy and Infectious Diseases (NIAID).

If you develop flulike symptoms while you're traveling or when you get back home, call your doctor immediately. Your health care provider can identify whether or not you have malaria by examining a drop of your blood on a microscope slide, according to the CDC.

In addition, if your doctor suspects you have malaria, expect your doctor to do a complete blood count and routine blood chemistry panel to determine how you're responding to the malaria infection. These tests will focus on detecting anemia, renal failure, and hypoglycemia.

If you are found to have malaria, you may be treated with a medication called artesunate that is given intravenously. The CDC says the artesunate treatment can last up to two days. But again, this should be considered the last line of defense—you really should be on malaria meds the whole time you're traveling in a risky region.

Your first line of defense in malaria is prevention, so if you know you'll be traveling to a region in which malaria is prevalent, it's crucial to prepare ahead of time. You need to pick up malaria pills and start taking them before you land in the region, to give your time body to prepare. Once you've started taking the pills the parasite will die as soon as it hits your blood.

To assess your risk of contracting malaria before traveling abroad, consult your health care provider. Or, better yet, talk to a travel medicine specialist. How far in advance of your trip you need to take malaria medication depends on the specific medication you decide to take. Some need to be taken just one to two days ahead of time, while some should be started one to two weeks ahead of time.

And then, when you do have your malaria pills in hand, it's essential that you actually follow through with the entire course of medication. Make sure you take all your pills, even if you're about to leave town and don't think you'll likely get bitten again. You can get bitten by a malaria-infected mosquito as you're boarding the plane to come home.

Was this page helpful?
Thanks for your feedback!
Tell us why!
Related Articles
What Is an Endemic Virus? WHO Warns COVID-19 'May Never Go Away' 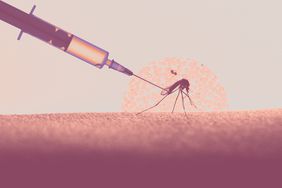