Beware of these disease-carrying pests next time you hit the trails.

A hike is a great way to de-stress and get some exercise. But in any season of the year, you might come home carrying an unwelcome visitor: A tick. A tick bite can transmit the microorganisms that lead to Rocky Mountain spotted fever (RMSF), babesiosis, tularemia, and other illnesses.

One of the other common illnesses that ticks spread is Lyme disease. Tick larvae hatch from eggs, pick up Lyme bacteria from feeding on mice, and turn into a nymph the following spring, ready to wreak havoc by spreading the disease. About 20% of nymphs and 50% of adult female ticks in the Northeast can be infected with Lyme disease bacteria, depending on the area.

In other words, coming across a disease-spreading tick may pose a few health risks. So, here's a guide about what you need to know about ticks, from removing the pesky creatures when you see them to seeking medical help after a tick bite.

When Do Ticks Come Out?

Ticks don't go away completely in chilly weather. For example, adult backlegged ticks or "deer ticks," the species that causes Lyme disease, aren't killed by freezing temps. Instead, the ticks wait for the snow to melt.

"Once the ground thaws, it only takes adult deer ticks a couple of days to start moving again," Thomas Mather, PhD, director of the TickEncounter Resource Center at the University of Rhode Island, told Health.

But there are fewer active immature-stage nymphs in the fall than other seasons, Anne R. Bass, MD, rheumatologist and professor of clinical medicine at Weill Cornell Medicine, told Health. Nymphs are tinier than adult ticks, about the size of a poppy seed, and thus easy to miss on your body.

Where Are Ticks Found?

Deer ticks are the primary vector of Lyme disease in humans in the eastern United States. In one study published in 2016 in the Journal of Medical Entomology, researchers found that the deer tick had undergone a population explosion at that time. The deer ticks had doubled their established range in less than two decades from when the study was published and were found in nearly half of all U.S. counties.

Deer ticks live in grassy, brushy, or wooded areas, found in leaf litter or even on animals. Many people get deer ticks in their yards or neighborhoods. To avoid ticks, you should avoid wooded and brushy areas and walk in the center of the trails.

That said, any size tick at any time of the year poses health risks. But getting rid of a tick is straightforward if you follow the proper steps. If you find one, keep calm and take note of the following rules for safe removal and disposal.

Disinfect the Area Before You Pull It Out

Ticks connect to your skin using a straw-like structure near their mouths called the hypostome.

"If that breaks, germs will spill into the hole in your skin," said Mather. Rubbing alcohol can help disinfect the area in case the bug happens to split apart when you pull it out.

Also, steer clear of folk remedies you may have heard, like covering it in nail polish or using heat from a match. Many tick species have more extended mouth parts that sink deeper into your skin, so burning the bug will not help detach it.

"Ticks secrete a substance like cement to hold in place," explained Mather. "It's not until they're full of blood that they will secrete another substance to dissolve it and detach."

Immature nymphs can be as small as a poppy seed, while adult ticks are the size of a sesame seed. So, the same tweezers you may use to pluck hairs probably aren't the best for pulling one out. Those tweezers have thick, slanted edges. Instead, you need a pair with fine, pointed edges to grab the tick.

Grab It Close to Your Skin

Set the point of the tweezers on top of your skin and perpendicular to the tick's body. Gently but firmly grasp the tick's head and mouthparts, and pull upward in a steady motion.

"The salivary glands are where all the germs are, and those are further back in the tick's body," noted Mather. So, you want to grab it as close to its mouth as possible, which will be at the bug's front. Don't twist or turn, as you might break the tick in two. Be sure to disinfect the area, as well.

A plastic bag is one of the best places for the tick once it's off your body. It should die fairly soon once inside, according to Mather. But before you seal it off, put the bag against a white background and take a picture, added Mather. It might seem terrifying not to throw it out immediately, but more on that later.

There are over 90 species of ticks in the United States, each associated with a particular disease and symptoms. However, finding a tick doesn't guarantee you'll get sick.

"A tick really has to be feeding for a good 24 to 48 hours before it's likely to transmit anything from its gut into a human," said Dr. Bass. Plus, some ticks may never get infected as larvae. "Ticks don't take vacations," added Dr. Bass, meaning they stick to their favorite locales. So, it's good to know what ticks (and, therefore, what illnesses) are most common where you live.

For example, deer ticks are common in the northeastern and some midwestern states near the Great Lakes. If you get bit in those areas, look for symptoms of Lyme disease, which typically show up three to 30 days post-tick bite and include:

On the other hand, lone star ticks thrive in the southeastern and mid-Atlantic states. Infected bugs can pass ehrlichiosis, which usually causes symptoms within one to two weeks post-bite, including:

Then, there are dog ticks, found all over the United States, and can carry Rocky Mountain Spotted Fever (RMSF), which was identified in the Rocky Mountains. But it's more common in the southeastern states. Aside from fever and headaches, you might come down with a rash two to four days after an infected tick bit you.

Identify the Type of Tick

If you develop symptoms, take your tick or tick photo to show a healthcare provider. Knowing the tick species will give them a better idea of treatment options.

Most types aren't hard to identify. And if you want, you can submit your tick photo immediately to TickEncounter's TickSpotters for identification. That way, you'll have it ready if you develop symptoms later.

"We're able to get back to everyone who sends a picture within two to three days," explained Mather.

But again, knowing where you were when you picked it up can be helpful. Particular ticks—and the diseases they may carry—are more prevalent in certain regions. If you start to show symptoms after the tick's out, your provider should be able to help you piece everything together based on your tick photos, plus where you picked it up.

Lastly, don't panic if you do show symptoms. Most diseases spread by ticks can be treated with antibiotics, especially if you begin treatment shortly after symptoms start.

If you get a tick bite, see a healthcare provider if you notice any of the following symptoms:

Spending time outdoors benefits our health, but there's a risk of being bit by a disease-carrying tick, depending on what region of the country you live in. One of those diseases includes Lyme disease, which can be very debilitating if not treated quickly.

If you find a tick on you while outdoors, following these rules for the safe removal and disposal of the tick is essential. Also, be on the lookout for signs of a tick-borne illness and contact a healthcare provider if you notice any symptoms. 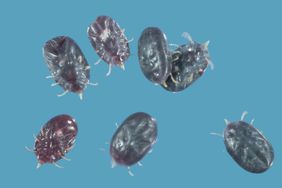