Knowing the symptoms to look for can help diagnose Lyme disease early on, when it's easily treatable.

Fever or fatigue, with or without a rash, can be a symptom of many things—and Lyme disease is just one possibility. To diagnose Lyme, doctors say they have to consider symptoms and circumstances.

If you've been hanging out in wooded or grassy areas, especially in certain regions of the country during the spring, summer, or even autumn months, it might make sense to entertain the possibility that a tick bit you. And what's the most commonly reported tick-borne illness in America? It's Lyme disease, by far.

But Timothy P. Flanagan, MD, associate professor of medicine in the infectious diseases division at Brown University's Alpert Medical School, says it would be a mistake to latch on to a Lyme diagnosis without ruling out other possible causes, including other infections transmitted by ticks.

You could have a different tick-borne infection entirely, such as anaplasmosis or babesiosis, or you could have Lyme with one or more "co-infections." That's because the same ticks that transmit Borrelia (the bacterium that causes Lyme) can carry other disease-causing microbes, too.

"It's super important that we think of all the tick-borne diseases"—not just Lyme, Dr. Flanagan told Health. Babesia, a parasite that causes babesiosis, is treated differently than Borrelia, for example.

Tick and Lyme disease symptoms, confirming or ruling out possible tick exposure and results of diagnostic testing (when lab tests are indicated), can help a healthcare professional arrive at a diagnosis, explains the Centers for Disease Control and Prevention (CDC).

Symptoms of Lyme disease in humans can be vague, and chances are you have no idea an infected tick has bitten you until symptoms surface.

Ticks secrete an anesthetic that makes their bites painless, explains Christine Green, MD, a family physician in Mountain View, California, and a member of the Bay Area Lyme Foundation's scientific advisory board. Plus, they're tiny. A young, immature tick, called a nymph—the stage of development during which these bloodsuckers are most likely to transmit Lyme disease—is roughly the size of a pinhead when it latches on, "so you don't know it's there," she told Health.

According to the CDC, the incubation period for Lyme—in other words, the time between a person's exposure to Borrelia bacteria and symptom onset—ranges from three to 30 days. The main symptoms of Lyme disease in the early days and weeks after infection can include:

"Often these people are more sick than you would expect from a cold," said Dr. Green. "They're in the doctor's office in the middle of summer, and they feel bad. They often do have headache or light sensitivity." Even new onset ringing in the ear can be a sign of Lyme, which can affect any cranial nerve, she said.

Jennie Johnson, MD, an attending physician of infectious diseases at Providence, Rhode Island-based Lifespan, says knee swelling is common. "They get a lot of fluid in the joint, and their joint gets big and swollen, and it's uncomfortable," she told Health.

Although many people look for a rash as a tip-off, it's entirely possible to have Lyme without a rash, or at least one that you didn't notice at the time. As for the other symptoms, Dr. Flanagan said they're highly variable and occur much more frequently with other tick-borne diseases.

Seventy to 80% of people infected with Lyme disease develop a type of rash called erythema migrans, or EM, according to the CDC. This red circular or oval rash can quickly expand, claiming up to 12 or more inches of real estate on your body. A rash can appear anytime during the incubation period after a tick bite but, on average, takes seven days to develop.

A classic bulls-eye pattern rash is indicative of Lyme, but it’s just one of several different rash presentations. Many people with Lyme do not develop this concentric circle rash resembling a target, so don't be fooled. You could have a red rash with crusting in the middle, a red circle with a clear center, a red-blue lesion with a clear center, or some other pattern. "A large red rash that's expanding without central clearing I find is most common," observes Dr. Flanagan.

Rashes can appear almost anywhere on the body, generally at or near the spot where the tick took its blood meal, says the American Academy of Dermatology (AAD). Ticks can settle in skin folds (the groin and armpits, for instance). They can hide in the hair on your head and attach to areas you can't see or reach, like your back. As the infection spreads, people may develop more than one rash.

What if Lyme disease isn't detected early on? The longer that disease-causing bacteria linger in the body, the more they disseminate, and as these microbes spread to tissues throughout the body, they can trigger a litany of symptoms. CDC says these may include:

You might have persistent or episodic symptoms, said Dr. Green. Pain that seems to move through the body? That's common too. "The hallmark of late Lyme is migratory joint pain: today my right knee hurts and tomorrow I'm limping on my left ankle, and, oh, my third finger of my right hand swelled up, and, oh, my neck has swelled up," she said.

In rare cases, Lyme disease bacteria can enter the tissues of the heart. This complication, called Lyme carditis, can lead to lightheadedness, fainting, shortness of breath, heart palpitations, or chest pain. Lyme disease symptoms have also manifested as mental health issues, such as anxiety or depression, per an American Psychological Association (APA) article published in June 2022.

Research has identified visual problems—such as unilateral chorioretinitis, which is inflammation of the retina that can affect vision—as uncommon symptoms of Lyme disease as well.

As noted previously, babesiosis can present concurrently with Lyme disease. Babesiosis causes an infection of red blood cells, per the CDC, and people can be asymptomatic or have life-threatening symptoms. A number of babesiosis symptoms (e.g., fever, fatigue, headache) are similar to Lyme disease, so it's important to see a healthcare professional to confirm or rule out what is going on.

Doctors say the sooner you notice symptoms, the better your outcome. The CDC notes that people treated in the early stages of Lyme generally make a full, rapid recovery.

Antibiotics are recommended for most people with Lyme disease, but what that regimen looks like varies widely from person to person. The National Institute of Allergy and Infectious Diseases (NIAID) says a short course of an oral antibiotic, such as doxycycline or amoxicillin, can clear up Lyme infection in most cases. However, the particular drug, dosage, and duration your doctor recommends may depend on factors such as:

Even after treatment, some people report lingering symptoms. They may have persistent pain, muscle and joint aches, unexplained numbness, and fatigue, for example. Brain fog and sleep disruption are also common, said Dr. Flanagan. These sputtering symptoms can stretch over a few months, he said, "but they will get better gradually—it can take time: two steps forward, one step back."

Symptoms that persist for more than six months may lead to what the CDC calls post-treatment Lyme disease syndrome (PTLDS). The CDC says people with PTLDS can get better in time, but it can take months. Some doctors recommend prolonged antibiotic treatment. However, CDC cautions that long-term courses of antibiotics can actually be dangerous.

People need to recognize that this is a significant medical illness. "This is not made up. It's real and it's serious," said Dr. Flanagan. "There's a lot they can do to help their body recover and heal." Boosting physical activity, for example, helps increase circulation and decrease inflammation in the body.

Taking an over-the-counter course of anti-inflammatory medication, like ibuprofen or naproxen, or applying topical creams can help ease ongoing pain, he explained. Getting plenty of restorative sleep is also critically important. Studies suggest it may be beneficial for curbing inflammation.

The bottom line: If you think you have symptoms of Lyme or another tick-borne disease, get evaluated and talk to a healthcare professional about how to best treat the illness and manage ongoing symptoms.

Lyme Disease and Coronavirus Have Some Similar Symptoms—Here's How to Tell the Difference
Was this page helpful? 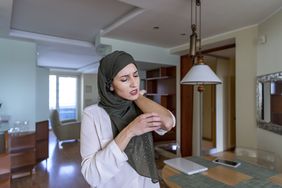