From lifestyle changes to medications to surgery, these are the most effective ways to stop fibroids from growing and get rid of them for good.

If you have painful fibroids or other bothersome symptoms, know that there are many treatment options for uterine fibroids. Your best treatment for fibroids will depend on your symptoms and factors, such as whether or not you've reached menopause or may want to get pregnant in the future.

Here are some common ways you can treat uterine fibroids.

Fibroids are abnormal growths that form on or in the uterus. About 20% to 80% of women will develop fibroids by age 50.

These overgrowths of the muscle cells in the uterus are noncancerous, so there's no need to panic, Janice Newsome, MD, associate division director of interventional radiology and image-guided medicine at Emory University Hospital in Atlanta, told Health.

Most fibroids are non-symptomatic and don't need treatment. But sometimes, fibroids can cause symptoms like:

Symptoms may depend on factors like how big the fibroids are, how many there are, and where they're located.

Fibroids may also increase the risk of infertility and adverse pregnancy outcomes.

If you have uterine fibroids but don't have any symptoms or only minor symptoms, doing nothing—while staying alert for any changes—is an option.

"If the fibroids are not causing any problems, and they're not dramatically enlarged, they can be watched," Mitchell S. Kramer, MD, chairman of obstetrics and gynecology at Northwell Health's Huntington Hospital in Huntington, New York, told Health. "You do not necessarily need to intervene."

This is often the strategy when you are nearing menopause or post-menopause. Increased estrogen can result in fibroid growth; often, as estrogen naturally diminishes, so do fibroids.

Watchful waiting is also an option if you want to get pregnant and the fibroid doesn't look like it will interfere with pregnancy. "From a pregnancy point of view, some fibroids are very problematic, some aren't," said Dr. Kramer.

A healthcare provider can help you decide if this option is a safe and effective one for you.

"Because we actually don't understand what causes fibroids to form, it's difficult to say what you should do to prevent them," said Dr. Newsome.

But there may be some possible lifestyle changes to consider. Some studies suggest that lifestyle factors like having a healthy diet and exercising regularly may help prevent fibroids.

Exercise may also help ease some uterine fibroid symptoms, but there are no known ways to get rid of fibroids naturally, added Dr. Newsome.

While there are no large studies on diet or foods that can shrink fibroids, there is some anecdotal evidence. Additionally, research has suggested that eating more fruits and green vegetables are associated with a lower risk of fibroids forming.

If watchful waiting and lifestyle changes aren't options for you, healthcare providers may move on to hormonal medications to control symptoms and even shrink the fibroids.

Several of these medications, like leuprolide (Lupron), are gonadotropin-releasing hormone (GnRH) agonists. They work by blocking hormone production.

This causes the fibroids to shrink, which relieves uterine fibroid symptoms like:

Reducing bleeding is especially important to lower your risk of anemia.

But halting hormone production means you may also end up with menopausal symptoms like hot flashes. Some healthcare providers prescribe "add back" medications, which are low doses of hormones, to counter that effect without decreasing how well the GnRH agonist works.

GnRH agonists, available in pill, nasal spray, and injection forms, are typically used for a short period of time. They can be helpful in reducing the size of a fibroid before surgery, for example. However, fibroids will grow back after these medications are stopped.

Hormonal contraceptives are another option to treat uterine fibroid symptoms. They won't necessarily reduce the size of uterine fibroids, but they may regulate periods or reduce heavy bleeding.

A few studies have suggested that danazol, a synthetic drug that mimics testosterone, can shrink fibroids and reduce symptoms. However, this treatment might also result in weight gain, acne, and unwanted hair.

Non-hormonal options include tranexamic acid (Lysteda), which can lighten bleeding if it's taken on days when your period is heavy.

And while they won't do anything to reduce fibroid size, nonsteroidal anti-inflammatory drugs (NSAIDs) like ibuprofen can help relieve fibroid pain. "For the most part, medical therapy tends to be more of a temporizing measure," said Dr. Kramer.

In this non-surgical procedure, healthcare providers use a magnetic resonance imaging (MRI) system to locate your uterine fibroids and then zap them with high-frequency ultrasound. "It's considered to be a permanent procedure to eliminate or decrease the size of the fibroids," said Dr. Kramer.

The actual procedure is painless and noninvasive. It's performed inside an MRI machine, and you can usually go home the same day.

Using MRI-guided focused ultrasound to treat uterine fibroids appears safe, even if you still want to get pregnant. Research is ongoing to see if there are risks of adverse effects.

Also called uterine fibroid embolization, this procedure deprives fibroids of their lifeblood—literally. "Embolization can block off blood supply to the fibroids," explained Dr. Newsome. "The fibroids shrink and die."

A healthcare provider will inject tiny particles into the arteries that supply blood to the fibroids. The particles set up a roadblock for any blood trying to reach the uterine fibroid. Uterine artery embolization can be done as either an inpatient (in a hospital) or an outpatient procedure (without hospitalization).

Embolization is generally an option if uterine fibroids are causing heavy bleeding, but it's not recommended if you plan to get pregnant.

"There are studies being done now to assess whether or not it's safe to have this procedure and get pregnant," said Dr. Kramer. It's thought to weaken the walls of the uterus, added Dr. Kramer, putting you at risk for complications during pregnancy.

Endometrial and radiofrequency ablations are procedures that may be helpful for treatment of uterine fibroids.

Endometrial ablation is a type of minor surgery that destroys the entire lining of the uterus (called the endometrium). This usually takes care of heavy bleeding, but the procedure tends to only work for some cases of uterine fibroids.

"Endometrial ablation doesn't treat all fibroids, just ones that are towards the inside portion of the uterus," said Dr. Newsome.

Endometrial ablation is usually done on an outpatient basis, even right in your healthcare provider's office. An instrument is inserted through the vagina and into the uterus, where it uses heat, electric currents, or microwave energy to destroy the fibroids and uterine tissue.

It's unlikely for you to be able to get pregnant after endometrial ablation. If pregnancy does occur after ablation, there is a higher risk of miscarriage or other problems.

Another type of ablation for treatment of fibroids is ultrasound-guided radiofrequency ablation (RFA). In general, an RFA procedure uses heat to cause tissue destruction, through the use of direct thermal conduction, ultrasound, or electromagnetic energy.

RFAs for fibroids are minimally invasive outpatient procedures. They have also been found to be safe and effective.

There are two kinds of ultrasound-guided RFAs: laparoscopic (e.g., Acessa) and transcervical (e.g., Sonata). For either type, a provider will use the ultrasound to insert the ablation device into the fibroids, resulting in the tissue being destroyed.

Following the procedure, the size of the fibroids will get smaller weeks to months later. It's also possible for pregnancy to occur after an ultrasound-guided RFA, but it's typically not recommended.

Unlike endometrial ablation, a myomectomy is an option if you still want to get pregnant and can be used to take care of intracavitary fibroids or those that go into the uterine cavity.

"Myomectomy is surgery to remove the fibroids from the uterus, and it keeps the uterus intact," said Dr. Kramer. There are several different ways to perform a myomectomy:

Some involve inserting an instrument through the vagina and cervix into the uterus to destroy or remove the fibroids. Others involve making small incisions in the uterine and abdominal walls to do the job. The procedures are considered permanent.

"The fibroids do not grow back," said Dr. Kramer. However, in some cases, it's not the end of fibroids entirely. "Theoretically, there could be very small ones that will grow over time that weren't detected at the time of the surgery," explained Dr. Kramer.

Sometimes myomectomy is accompanied by morcellation, a procedure that breaks fibroids into smaller pieces before removing them.

However, the Food and Drug Administration (FDA) recommends against this practice, especially if you are near or in menopause, in case there is an undiagnosed cancerous tumor present. If a cancerous tumor is broken into little pieces, it could spread.

Fibroids are a common reason for a hysterectomy, a surgical procedure to remove the uterus. This procedure is permanent and typically cures heavy menstrual bleeding and other fibroid-related symptoms.

The procedure is usually reserved for those with very large uterine fibroids and heavy bleeding who are nearing or post-menopause.

However, it may be the preferred treatment method for other patients. "If a woman has a family history of ovarian cancer or endometrial cancer, maybe they're not the best person to have a uterine-sparing procedure," said Dr. Newsome.

Notable ways of performing a hysterectomy involve making incisions in the abdomen or vagina, or laparoscopy—a procedure where a thin telescope (laparoscope) is inserted through small incisions made in the abdomen.

If fibroids are small and there are no symptoms or only minor symptoms, treatment may not be needed and you will be monitored for any changes.

If you have symptoms, there are many treatment options you can explore with your healthcare provider, including medications and surgical procedures. 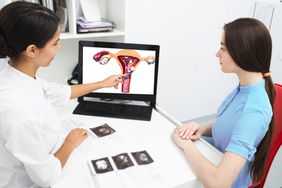 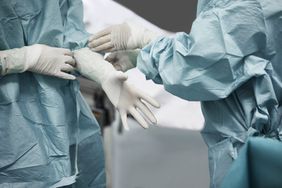 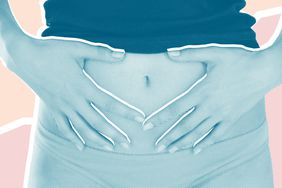