The telltale bulls-eye rash is one indicator—but it's not the only sign.

When you find a tick crawling through your hair or stuck to your skin, two thoughts probably pop into your mind immediately: How do I get this thing off of me? And: Should I be freaking out right now? It's one thing to find a tick on the move on your body but it's an entirely different thing when you find what you think are signs of a tick bite. Now, you need to watch for the symptoms of a tick-borne illness.

Not All Tick Bites Cause Illness

Good news: The majority of tick bites are harmless and don't warrant medical attention, according to Nemours Foundation. If anything, these bites may just cause a little redness, irritation, and swelling that should subside within a day or two reports the CDC. These bites can be treated at home by carefully removing the tick and then cleaning the area.

However, with the possibility of tick-borne diseases, it's understandable to feel concerned. Generally, it takes a tick at least 24 hours for a tick to transmit Lyme disease, though some other infections can be passed on within a few hours or minutes after the bite, according to Penn Medicine.

If you plan to spend lots of time in your backyard or hiking this spring and summer, it helps to be able to differentiate between mild and serious symptoms of a tick bite—and how to avoid these creepy crawlers in the first place.

What Are Ticks, and Where Do They Usually Bite You?

Ticks are tiny, blood-sucking parasites, according to the U.S. National Library of Medicine's MedlinePlus resource. That means they latch onto animals and humans to feast on their blood. Some ticks are so tiny that they can be hard to see with the naked eye—but ticks can grow in size after a feast of blood.

Although ticks can be found nearly everywhere in the U.S., they occur primarily in brushy, grassy, or wooded areas, per the CDC. Ticks are especially abundant in ecotones, or transitional areas from one dominant type of vegetation to another, David Claborn, DPH, an expert in vector-borne diseases and director of the Master of Public Health program at Missouri State University, told Health. The space between heavily-wooded areas and open meadows or your yard, as well as wild game trails, are major hot spots for ticks.

Because they're attracted to warm, moist locations, ticks often crawl from leaves, plants, grass, or shrubs onto your body and then gravitate toward toasty spots like your armpits, groin, or hair, says MedlinePlus. Once they've settled in, they hunker down to draw blood.

One important thing to remember: Not all ticks carry disease—but you should still find and remove any ticks on your body after being outside, just in case.

According to the CDC, some people may experience a mild allergic reaction after being bitten by a tick. This may involve minor swelling and itchiness.

Usually, these symptoms are nothing to worry about, and there's no need to contact a healthcare professional if you're not having any other symptoms, Luis A. Marcos, MD, MPH, associate professor of clinical medicine in the division of infectious diseases in the Renaissance School of Medicine at Stony Brook University, told Health.

Any of those symptoms following a suspected tick bite are a cue to seek medical attention, Aaron Hartman, MD, a family medicine physician based in Virginia, told Health.

Outside of a local reaction or later symptoms of tick-borne disease, you should also see a healthcare professional immediately if you show any signs of a severe allergic reaction from a tick bite (aka anaphylaxis) or tick paralysis, which is very rare, per the CDC. Those symptoms can include:

Though there are some more general symptoms of tick-borne illnesses to watch for after a bite or suspected bite, symptoms can also vary depending on the specific vector- or tick-borne disease you may be dealing with.

"Lyme disease is the most common vector-borne disease in the United States, with over 30,000 cases each year," said Dr. Marcos. The most high-risk areas for Lyme disease are in the northeast and upper Midwest, per the CDC.

In up to 80% of cases, a characteristic bulls-eye rash can appear up to 30 days after a tick bite, usually within about a week, the CDC says. It's generally not itchy or painful, but it may be warm to the touch and expand over a period of several days.

Other initial signs of Lyme disease include:

Rocky Mountain spotted fever (RMSF) is relatively rare, said Dr. Marcos. While cases rose between 2000 and 2017, there were fewer than 6,000 cases in the U.S. in 2019, per the CDC. People have caught RMSF throughout the contiguous U.S., but five states account for over half of all cases: Arkansas, Missouri, North Carolina, Tennessee, and Virginia.

"When you have it, you're not just walking in the streets—you're sick with a high fever, and it hits you fast," said Dr. Marcos. Initial symptoms are similar to those of Lyme disease: a fever, headache, nausea, vomiting, and muscle pain. Within two to four days of developing a fever, most people also have a rash which can vary in appearance from splotchy red to a flush of tiny red dots.

RMSF can rapidly develop into a life-threatening illness or causes permanent disability such as the loss of arms, fingers, or toes due to damage to blood vessels, per the CDC. So if you fall ill after spending time in areas where ticks often live, contact a healthcare professional as soon as possible.

If you feel like you're coming down with something one day to two weeks after a hiking trip out west, it's possible you could have Colorado tick fever (CTF), said Dr. Marcos. The virus is primarily found in Colorado, Utah, Montana, and Wyoming.

Common symptoms include a fever, chills, headache, muscle aches, and generalized discomfort, the CDC says. While you may have lingering fatigue or weakness for several weeks, the illness tends to be mild. However, you should still see your healthcare professional if you believe you might have it.

Tularemia, a very rare infectious disease, can be transmitted by ticks throughout the U.S. Initial symptoms include a fever that can be as high as 104 degrees Fahrenheit and a skin ulcer (open sore or wound) at the site of the bite, which may be very painful, said Dr. Marcos.

Cases of tularemia range from mild to life-threatening, but most can be treated with antibiotics, according to the CDC.

Ehrlichiosis is carried by the lone star tick, and cases tend to occur in the southeastern and south-central parts of the U.S., spanning from the east coast to Texas.

According to the CDC, signs of infection include fever, chills, headache, fatigue, muscle aches, nausea, vomiting, diarrhea, and, more commonly in children, a rash (though symptoms can vary widely).

If you're very young, old, or have a weakened immune system, you could be at higher risk of developing severe illness, noted Dr. Marcos. However, when caught early, ehrlichiosis can be treated with antibiotics.

The best game plan to prevent tick-borne diseases is to avoid ticks in the first place. Here's how the CDC recommends doing that:

If you do happen to find a tick on you, the best way to remove it is to use a small pair of tweezers or a tick key to gently grasp onto the head and pull it away from your body, said Dr. Hartman. Then, the CDC recommends thoroughly cleaning the area and your hands with soap and water or rubbing alcohol. Reach out to a healthcare professional if you are unable to get rid of the tick completely.

If you become sick after being bitten, your healthcare professional can determine the best treatment plan depending on the cause and severity of your illness. 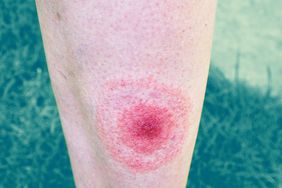