So There's a Mumps Outbreak Near You. What Exactly Is Mumps?

Health officials believe a drop in vaccination rates has contributed to an increase in mumps cases in recent years.

If you’re not too familiar with mumps, it’s probably because vaccination campaigns over the last half-century have made outbreaks few and far between. (Before a vaccine became available in the 1960s, around 186,000 cases were reported each year.) In recent years, however, the annual number of cases reported to the Centers for Disease Control and Prevention (CDC) has increased—from 229 in 2012 to 6,366 in 2016. Health experts believe that a drop in vaccination rates is at least partially responsible.

So far in 2019, mumps infections have been reported in 151 people—and news reports of recent outbreaks are alarming many. So what exactly is mumps, and why is it so worrisome? Here’s what you should know.

Mumps can cause serious complications

Mumps is a viral illness that affects the saliva-producing glands (called the parotid glands) in the face and neck. It can cause swelling in these glands, which can result in pain, difficulty swallowing, and puffy cheeks. It can also cause general feelings of sickness—like fatigue, fever, and muscle pain—although some people who contract the disease have no symptoms at all.

Most people who get sick with mumps recover, but complications can occur. It can cause swelling of the testes or ovaries, and on rare occasions, it can lead to hearing loss or dangerous swelling around the brain, known as meningitis. In the most serious cases, seizures, paralysis, or death can occur.

7 Signs You Could Have Mumps

Mumps is spread through saliva and respiratory droplets created when a person coughs or sneezes. Sharing cups and utensils can also spread the virus, and most outbreaks happen in settings where people are in close quarters—like in a college dorm or a team locker room.

Mumps symptoms usually develop between 16 and 18 days after exposure to the virus, but they can also begin as long as 25 days later, according to the CDC. People with mumps can be contagious starting three days or five days before symptoms appears.

People without symptoms can also carry and shed the virus as well. That’s one of the reasons it spreads so fast and so far, Aileen Marty, MD, a professor of infectious diseases at Florida International University told Health in 2016: “Infected people shed the virus before they start to have symptoms,” she said. “So you don’t really know who to protect yourself from.”

So There's a Measles Outbreak Near You. How Worried Should You Be?

Vaccines offer protection, but they’re not a sure thing

Kids usually get a mumps, measles, and rubella vaccine (MMR) at 12 to 15 months of age and a second dose at 4 to 6 years. Earlier this year, the American Academy of Pediatrics added an optional third dose of the vaccine—to be administered during mumps outbreaks—to its recommended childhood immunization schedule.

Doctors also recommend that adults, with the exception of pregnant women or people who have compromised immune systems, get vaccinated if they didn’t have those two shots when they were kids.

If you don't know whether you or your child has been vaccinated, talk to your doctor. While vaccination is the best protection against mumps, vaccinated people can still become infected. Getting two doses of the MMR vaccine is about 88% effective in protecting against mumps, according to the CDC.

If you have symptoms, stay home

To make sure you're not spreading mumps to others, stay home for five days after swollen glands appear, and talk to your doctor about any other symptoms of mumps.

There’s no treatment for the disease itself, but doctors can prescribe anti-inflammatory drugs to reduce fever and pain. They can also monitor patients for complications and can provide IV fluids and additional care if the condition becomes more serious.

This post was originally published on March 7, 2018 and updated for accuracy. 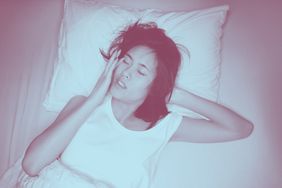