It's the second case of monkeypox in the US this year.

A Maryland resident is in isolation after being diagnosed with monkeypox, according to a statement that the Centers for Disease Control and Prevention (CDC) released on November 17. The individual had recently traveled back to the US from Nigeria, where a strain of the virus has been re-emerging since 2017.

The person presented with mild symptoms and does not need hospitalization, the Maryland Department of Health reports.

This is the second time that a case of the rare disease has been reported in the US this year. The earlier case was in July 2021, when a US citizen also returned from a trip to Nigeria. Before this year, the last instance of monkeypox in the US was in 2003, when there was an outbreak of 47 cases associated with imported animals.

So what exactly is monkeypox—and is the fact that the disease has appeared yet again in the US something you need to be worried about it? Here's what experts say.

Monkeypox is a "rare but potentially serious viral illness," per the CDC. The disease itself is caused by infection with the monkeypox virus, which is a "distant cousin" of the deadly and now-eradicated smallpox disease, according to Donald S. Burke, MD, professor of epidemiology and former dean at the University of Pittsburgh Graduate School of Public Health. "It has a low mortality rate compared to smallpox, but it looks the same," Dr. Burke tells Health.

The disease has "monkey" in its name because that's the type of animal in which researchers first discovered the disease when there were two outbreaks among lab monkeys in 1958. The first human case of monkeypox was in 1970, per the CDC.

Monkeypox is found predominantly in central and western Africa, the Maryland Department of Health reports, with cases rarely happening outside of Africa.

As Dr. Burke explains, monkeypox symptoms are very similar to those of smallpox. Most notably, monkeypox—like smallpox—causes skin lesions called pockmarks, which are red bumps that usually fill with a milk-like fluid. The lesions, Dr. Burke says, are usually present throughout the body and face rather than on just one part of the body.

Monkeypox usually first makes itself known with flu-like symptoms, occurring before the rash develops. Often, people with monkeypox get a fever—typically before the pockmarks start emerging. People may also experience swollen lymph nodes with monkeypox, and according to Dr. Burke, respiratory infections also often occur in people infected by the virus.

Usually, monkeypox symptoms last two to four weeks, according to the Maryland Department of Health. While it can be uncomfortable, monkeypox usually isn't fatal, Derek Walsh, PhD, professor of microbiology-immunology who studies poxviruses at Northwestern University Feinberg School of Medicine, tells Health; it has a case fatality rate of 1% to 10%.

Monkeypox can also affect organs other than the skin, Jorge Luis Salinas, MD, an infectious disease physician with Stanford Health Care and an assistant professor of infectious diseases at Stanford School of Medicine, tells Health. In rare cases, people develop encephalitis (aka, brain inflammation) and can also develop infections in their eyes. "But these complications are rare, especially here in the United States, where monkeypox itself is very rare," he says. "There would have to be hundreds of cases in the United States before we could see a severe case like that."

Because it can take up to 21 days for symptoms to develop after infection, in this most recent case, the CDC and Maryland health officials are monitoring the health of those who are considered to be close contacts of the patient for that amount of time.

One route of monkeypox transmission, according to Dr. Burke, is direct contact with the skin lesions—you could get the disease if you touch someone else who has monkeypox and the virus enters your respiratory tract. You could also get monkeypox if you touch clothes that someone with monkeypox wore or if you share bed linens with an infected person.

Primarily, the virus spreads through large droplets. "If you're sitting next to someone and they're coughing, the virus would be generated in the air, and it can enter the respiratory system," Dr. Burke says. It's thought that the virus doesn't travel more than a few feet, and to be infected, you'd have to have prolonged face-to-face contact with an infected individual. Similar to COVID-19 and the flu, Dr. Burke notes masks can be helpful in preventing this type of transmission.

For smallpox to even spread in the US, it has to get here first. According to the CDC, monkeypox doesn't occur naturally here. When cases do appear in the US, they are associated with international travel, like in this most recent case, or the importing of animals from areas where the disease is more common.

How Is Monkeypox Treated?

Unlike influenza and other viral illnesses, Dr. Salinas says it's not yet known whether antiviral medications would help with monkeypox—there just haven't been enough cases to warrant studies on effective treatments. If a patient develops a secondary bacterial infection due to monkeypox—like pneumonia and encephalitis—then doctors would use antibiotics to stave off the bacteria.

According to Dr. Burke, because the two viruses are related, the smallpox vaccine can help treat monkeypox, even after you've already been infected. So if you think you were ever infected with monkeypox, your best bet would be to contact your local health department about a smallpox vaccination. Although local authorities would likely have to procure a vaccine from the CDC since smallpox hasn't been a routine immunization since it's been eradicated.

Is This Case Something to Worry About?

Because most people aren't vaccinated against monkeypox through a smallpox vaccine, Walsh says it could be concerning that there's a large portion of the world population vulnerable to the virus. That said, Americans probably don't need to be very concerned at this point.

Monkeypox is not highly transmissible, Dr. Burke says. Plus, we're not at the point of person-to-person transmission, according to Dr. Salinas. For example, when the July 2021 monkeypox case happened, the infected individual did not pass on the disease to anybody else.

People who have compromised immune systems, such as those with HIV or who are undergoing cancer treatment, may want to be extra careful if monkeypox emerges in their area. But overall, there's no reason to fret about wide transmission just yet. "People should be watchful in waiting, but I wouldn't change any daily routines," Dr. Burke says.

In terms of this case, the Maryland Department of Health is saying that "no special precautions are recommended at this time for the general public."

Instead, Dr. Salinas recommends focusing on preventing the transmission of viruses that are already spreading—get your COVID-19 and flu vaccines, stay home when you're sick, and mask up when you're in public.

Monkey B Virus and Monkeypox Cases Have Recently Been Reported—Here's What the Differences Are
Was this page helpful? 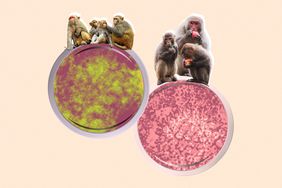 Monkey B Virus vs. Monkeypox: What's the Difference?