When the lump on her face didn't get better with antibiotics, doctors looked closer and found a maggot living inside.

Have you ever returned from vacation worried about what might have crawled into your suitcase or hitchhiked home on your clothing? A case report in BMJ highlights an extreme (and we really mean extreme) version of this common concern: A British woman who'd recently visited the Ugandan rainforest unwittingly brought back a tropical fly larva—burrowed in her forehead.

At first, our intrepid traveler and her doctors assumed she simply had an infected bug bite. The 55-year-old visited the emergency department complaining about a lesion on her forehead that had become swollen over the past nine days. Since she had no other symptoms, she was given an antibiotic prescription and discharged.

Three days later, however, the woman was back: The bump on her face had grown to 1 centimeter in diameter and was now emitting a strange discharge. She'd developed shooting pains in the area as well.

She was admitted to the head-and-neck surgery ward, where she stayed for four days. Her doctors soon determined that this was more than just a bug bite—it was an actual bug. It seems that a fly's eggs had made their way into her skin, and at least one of them had hatched.

The woman's official diagnosis was myiasis—an infestation caused by the larvae of two-winged flies, otherwise known as maggots. Removal of these types of pests can be tricky: "The larva should not be forcibly removed," her doctors wrote, "because its tapered shape with rows of spines and hooks anchor it to the subcutaneous tissue."

To coax the larva closer to the surface, doctors slathered the patient's forehead with petroleum jelly, which makes it harder for the insect to get oxygen. (By the way, do not try this at home to remove ticks or other strange things buried in the skin. In the case report, the doctors note that this method "may asphyxiate the larva before it is able to migrate out of the skin" if it's not done correctly.)

The doctors were then able to perform surgery to extract the larva, which was sent to the London School of Tropical Medicine for examination. An ultrasound identified the possibility that more larvae were still in hiding, so the patient consented—enthusiastically, we presume—to further surgical exploration and cleaning of the wound.

The fly turned out to be a species known as Lund's fly, or Cordylobia rodhaini, a "rarely seen" bug from the African rainforest, according to the case report. While other insect species (like the Tumba fly from Africa and the human botfly from the Americas) are more common culprits of myiasis, there had only ever been 14 other cases involving the Lund's fly reported worldwide.

That's because the Lund's fly generally prefers to lay its eggs on damp clothing, rather than on the skin, or on "thin-skinned mammals such as rodents," according to the case report. When it does infest humans, "the larva is activated by body heat, hatches, and invades the skin," the patient's doctors wrote. The bug matures under the skin for eight to 12 days and then emerges as a fully grown fly.

The location of the woman's myiasis was also rare, her doctors noted—which was one reason her diagnosis took so long. (Doctors say she may have become infected when she wrapped a damp towel, which had been left outside for some time, around her hair.) In fact, there had only been one other case of myiasis on the face ever reported in the United Kingdom (UK).

Although myiasis is not common in the U.K., the case report notes that it's the fourth most common travel-associated skin disease worldwide. As international travel becomes more prevalent and frequent, the authors say, it's increasingly important for doctors to learn about such a condition.

And it turns out, actually, that this woman (and her maggot, of course) weren't alone: A friend of her son who'd accompanied the family to Uganda also returned from the trip with an infestation—his on his back.

The walk-in clinic he'd visited in London "did not believe the lump on his back was anything more than an infected bite," according to the case report. He was bandaged up and sent home, but when he later removed the bandage, he discovered that a maggot had emerged.

The woman in the report—and presumably her son's friend—healed and recovered in a few weeks. (The most commonly reported complication of these types of lesions are secondary infections and scarring, but none of this was reported in her case.)

She even had a sense of humor about the whole thing. When asked to provide her perspective, for the case report, she wrote, "I have previously been used to having lots of things running through my mind." She added that "ideas particularly would often pop out, [but] maggots were a first!"

What Is Monkeypox? Maryland Resident Diagnosed With the Rare Disease—Here's What to Know
Was this page helpful? 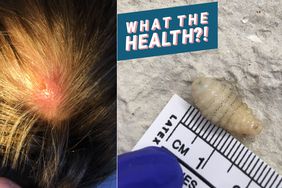 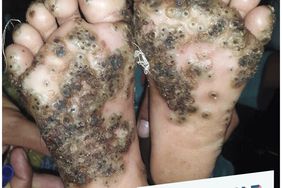 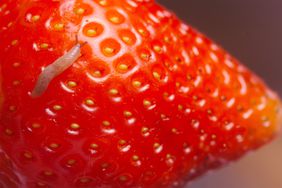 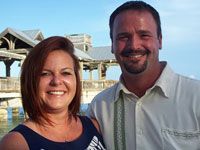