A fever is usually a sign that your body is fighting an infection. Learn how to treat the discomfort, and find out when to see a healthcare provider.

A fever is an increase in normal body temperature. It's not a disease on its own, but it's usually a symptom of an infection or illness that your body is trying to fight off. Most bacteria and viruses that cause infections thrive at a normal human body temperature, so a fever can help fight them by making it harder for these germs to survive, according to the National Library of Medicine's MedlinePlus. Fevers also activate your body's immune system.

But a fever can also be uncomfortable. When a person has a fever, they may also have sweating and chills, and they may become dehydrated. If you or someone you're taking care of has a fever, learn how to treat their symptoms at home and how to determine when you should seek advice from a healthcare provider.

Though the normal body temperature is around 98.6 degrees, this varies from person to person, by time of day, and due to other factors–for example ovulation in people who menstruate, according to MedlinePlus. The Centers for Disease Control considers a fever to be a temperature of 100.4 degrees or higher.

Besides infections, fevers can also be caused by some autoimmune diseases, certain medications and immunizations, and cancer, particularly blood cancers like leukemia and lymphoma, according to MedlinePlus.

"Fever will dehydrate you, and you have to replace what you have lost," said Gustavo Ferrer, MD, a pulmonologist and founder of Intensive Care Experts/Aventura Pulmonary Institute, in Aventura, Florida.

Water, tea, and chicken broth are all smart options. Your pediatrician may recommend an electrolyte solution for a young child.

Don't Eat if It Bothers You

When your body is feverish due to an infection of some sort, you may also have an upset stomach or nausea, not to mention a lack of appetite. It can be hard to keep food down or simply unappealing to eat, Dr. Ferrer said, so "never force anybody to eat."

There's no evidence that layering on blankets "and trying to sweat out the fever" has any benefit, Dr. Ferrer said.

Instead, you'll probably feel better if you stay cool, Dr. Ferrar said. Take a lukewarm or cool shower or bath at a temperature that's comfortable to you, or apply cool compresses to the neck, armpits, or forehead. These methods won't treat the underlying cause of the fever–but they can help ease some discomfort.

Get Plenty of Rest

When you have a fever, your immune system is working overtime to battle whatever infection or disease is making you ill.

Research suggest that sleep boosts immune system function, and a small 2019 study in the Journal of Experimental Medicine suggests that that, in particular, sleep helps the body's infection-fighting t-cells work more efficiently.

11 Surprising Health Benefits of Sleep
06 of 10

Acetaminophen (Tylenol) and ibuprofen (Advil, Motrin) are the go-to medicines for reducing fever in adults and children, per MedlinePlus. Aspirin is also effective in adults but should never be given to children or teenagers, according the American Academy of Pediatrics (AAP). It's been linked to a rare but serious condition called Reye's syndrome that can affect the liver and the brain.

Another reminder for parents: Make sure to administer the correct dosage based on your child's age and weight. And be aware that acetaminophen may also be included in many over-the-counter medications taken to relieve cold and flu symptoms. You don't want to take too much, Dr. Ferrer warned, because it "continues to be one of the most common reasons for liver failure."

When To Consult a Healthcare Provider: Infants

For infants 12 weeks old and younger, the American Academy of Pediatrics (AAP) advises caregivers to call their pediatrician any time the baby's fever is 100.4 or higher.

Children under 1, especially infants 6 months or younger, are extremely vulnerable when they have a fever because they can become dehydrated quickly, Dr. Ferrer explains.

When To Consult a Healthcare Provider: Children

The American Academy of Pediatrics (AAP) advises calling a pediatrician for any fever of 104 degrees or higher in a child of any age.

If your child has a fever of any temperature and looks very ill, is unusually drowsy, is very fussy, you should call a pediatrician, according to the AAP.

Additional reasons to call your pediatrician include a fever with a stiff neck, a severe headache, a sore throat, ear pain, an unexplained rash, or repeated vomiting or diarrhea.

A worsening fever or one that lasts more than two days in a child younger than 2 or three days in an older child are additional reasons to call the pediatrician.

Seizures are another concern when young children have fevers. Children 6 months to 5 years of age can experience febrile seizures, a type of seizure that occurs within the first few hours of a fever. The AAP advises parents to call their pediatrician when a child has a fever and a seizure.

When To Consult a Healthcare Provider: Adults

In adults, a fever of less than 101 is considered mild. At 103 degrees or higher, it's a different story. "If you have a temperature that is going beyond 103 or 104 and it's persistent, this is the time that you've got to consider seeing the doctor," Dr. Ferrer said.

Because many things can cause a fever—certain medications, heat illness, cancer, autoimmune diseases—Dr. Ferrer said that people should note the symptoms that accompany their fever to get an accurate diagnosis.

Burning with urination in addition to a fever, for example, may be a sign of a urinary tract infection, while coughing and sore throat that accompany fevers could be the flu or COVID-19.

When To Seek Emergency Care

In children, a fever-induced seizure that doesn't stop after five minutes should be treated as an emergency. Call 911, the AAP advises. 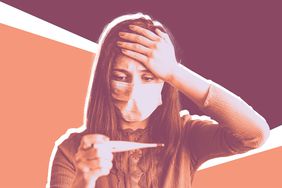 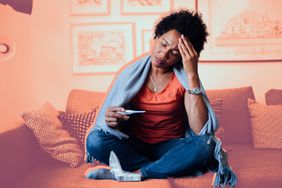 What Causes a Fever? Here's What to Know—And When to See a Doctor 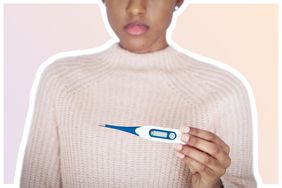 The 9 Best Thermometers You Can Buy Online Right Now, According to Customer Reviews 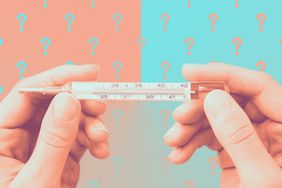 What Exactly is 'Normal' Human Body Temperature—and Has It Really Decreased? 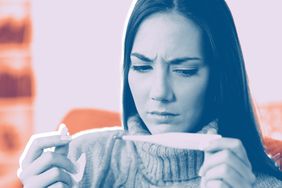 What Is a Low Grade Fever? We Asked Experts to Explain