She sought treatment for a sore, irritated throat.

Having a sore throat isn't fun for anyone—but one woman's sore throat turned out to be even less fun than usual.

According to a new case study published in The American Journal of Tropical Medicine and Hygiene, a 25-year-old woman's throat pain and irritation was caused by a worm in her left tonsil. The woman reportedly presented to St. Luke's International Hospital in Tokyo, Japan with left pharyngeal pain and irritation after consuming an assortment of sashimi.

Doctors gave the woman a physical exam, and discovered a "black moving worm" that measured about 1.5 inches long in her left tonsil. Doctors removed the worm using a pair of tweezers and sent it off for testing—the results of which revealed the worm was a fourth-stage larva of Pseudoterranova azarasi, a parasitic roundworm.

Why Are Worms Coming Out of Strawberries in This Viral Video? We Asked an Expert to Explain

According to the case study authors, Pseudoterranova azarasi mainly infects the stomach after someone consumes it in raw or undercooked fish. It's similar to other roundworms in the Anisakis simplex, which cause gastric, intestinal, ectopic, and allergic diseases, but symptoms associated with P. azarasi are milder.

P. azarasi are also larger and darker than A. simplex worms, and because medication isn't effective against the larger worms, the report says "direct removal is the most effective."

This Woman Pulled 14 Tiny Worms Out of Her Eye

If you like sashimi or sushi, don't panic: P. azarasi infections happen, but they aren't terribly common. More than 700 cases have been reported in total, in Japan, North Pacific countries, South America, and the Netherlands, the report says. And, while infections are rare, a P. azarasi infection of the throat is even more rare. But, when it happens, that infection can cause what's known as "tingling throat syndrome" and a cough.

This unnamed 25-year-old's story also isn't the first time we've heard about this kind of infection—there have been other case reports of people being infected with P. azarasi and they sound similarly disturbing. One woman in Japan coughed up a worm with three months after being infected, according to a 2011 case report published in the journal Emerging Infectious Diseases; another case report, this time of a 28-year-old man, tells how he and his doctors thought he had liver cancer until doctors discovered his "tumor" was actually a worm.

In the latest case, the woman ended up fine—according to the report, her blood test results were normal and her symptoms "rapidly improved" once she was worm-free. 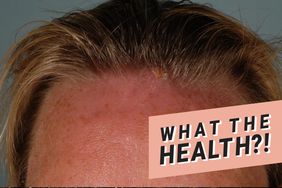