There's still a lot to learn about new variants.

Medically reviewed by
Jason DelCollo, DO

The COVID-19 pandemic saw several new variants of the virus, SARS-CoV-2, emerge. One thing to know about variants is that not all variants are created equally. For example, some can spread more easily, while others may be better at evading the immune system. In August 2021, a new variant appeared on the scene: the B.1.621 variant, also called Mu.

But what is Mu, and what put it on everyone's radar?

What Is the Mu Variant, Exactly?

Mu is a variant of SARS-CoV-2. New variants form when viruses spread and mutate. New variants can pose a risk to public health, for example, if they cause severe symptoms or large outbreaks. Around the world, health authorities like the World Health Organization (WHO) and the Centers for Disease Control and Prevention (CDC) monitor new variants in an effort to keep the public safe.

Mu was first identified in Colombia in January 2021, according to the WHO's weekly bulletin from August 31, 2021. Since Mu's emergence, there have been some scattered cases, as well as reports of larger outbreaks, around the world, including in other areas of South America, the UK, Europe, the US, and Hong Kong. In response to the rising case numbers, the WHO classified Mu as a variant of interest at the end of August 2021.

What Is a Variant of Interest?

According to the WHO definition, variants of interest (VOIs) have certain genetic changes that make the virus more transmissible, able to evade the immune system and treatment, and capable of avoiding diagnostic detection. They also occur in multiple clusters or multiple countries. While not in the highest risk category, VOIs do warrant closer monitoring than some other variants.

Mu was on the WHO list of VOIs from August 2021 to March 2022. It was classified as a VOI because it demonstrated "a constellation of mutations that indicate potential properties of immune escape," according to the weekly bulletin from the WHO. This meant the virus could pose a significant risk to global public health.

How Worried Should You Be About the Mu Variant?

This particular variant didn't become a major global health risk like Omicron or other variants of concern (VOCs)—a higher risk category than VOIs. In contrast to the WHO, the CDC did not classify Mu as a VOI. Instead, Mu was considered a variant being monitored (VBM), according to the CDC. VBMs are in a lower risk category than VOIs because they do "not pose a significant and imminent risk to public health in the United States," according to the CDC website.

William Schaffner, MD, an infectious disease specialist and professor at the Vanderbilt University School of Medicine, pointed out that Mu was first detected in January 2021 and was not named a variant of interest until eight months later. Researching how quickly new variants spread and their level of contagiousness can take time.

Infectious disease expert Amesh A. Adalja, MD, a senior scholar at the Johns Hopkins Center for Health Security agreed that Mu was not a reason for panic. "People should not be so worried about this variant," Dr. Adalja told Health. "Variants are continuously being generated."

How To Protect Yourself From New Variants

The best way to protect yourself from Mu is essentially the same as how you'd protect yourself against other variants, Richard Watkins, MD, an infectious disease physician and professor of internal medicine at the Northeast Ohio Medical University, told Health.

According to Dr. Watkins, that means getting fully vaccinated against COVID-19 and following guidelines regarding booster shots. It's also important to wash your hands frequently and take health precautions when visiting areas with moderate or high levels of COVID-19 spread. 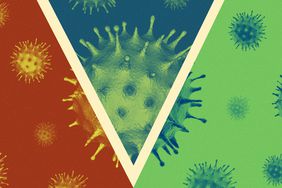