As COVID-19 vaccines became available many folks lined up to get their shot. There were others who chose not to get vaccinated due to personal, religious, or cultural beliefs. And, many people remained on the fence debating if they should get vaccinated. Sometimes the consequences of delaying or refusing the vaccine can be devastating.

A Virginia father died after a weeks-long battle with COVID-19. His wife passed away from the virus just two weeks earlier, and together they leave behind five children and an extended family deep in grief.

Kevin Mitchem, 48, a heavy equipment operator who "treasured" spending time with his kids, lost his battle with COVID on October 8, 2021, according to his obituary. His wife, Misty, 46, a medical transcriptionist, died on September 23, 2021.

Their four youngest children—11-year-old twins, as well as two teenagers, ages 14 and 17—have since moved in with an aunt and uncle, Fredericksburg, Virginia, newspaper The Free Lance-Star reported. The oldest child, 22, has a toddler-age son. "I'm sure she wanted him to get close with his grandfather and that's not gonna happen now," Mitchem's brother, Mike, told the paper.

Mike Mitchem has set up a GoFundMe "to provide a bit of relief for [the] kids who just had their family annihilated," he wrote on the site.

Kevin Mitchem started feeling sick in September, coming down with a cough, his brother told The Free-Lance Star. He went to an urgent care facility and was prescribed cold medicine. After no improvement, he returned to urgent care after a few days, where he tested positive for COVID and was advised to go home and rest.

A few days later, Misty also started feeling unwell, and her condition deteriorated rapidly, Mike Mitchem said. After visiting urgent care, she was rushed to the hospital. Soon she was unable to breathe on her own and was put on a ventilator. She died five hours later, just days after coming down with her first symptoms.

Mr. Mitchem was admitted to the hospital the same day his wife died. Though his condition seemed to improve at one point, it turned out that the virus had caused "irreparable damage to his lungs." About two weeks after going to the hospital, he lost his fight with the virus.

While Misty had diabetes—which the Centers for Disease Control and Prevention considers a condition that puts someone at higher risk for developing severe COVID-19—her husband had no underlying health conditions or comorbidities, his brother added.

Even though family members encouraged them to do so, Kevin Mitchem and his wife did not get vaccinated against the "vile disease," Mike disclosed on Facebook.

"They'd just been leery. They were going off what they've been hearing and reading on the internet," Mike said in his interview with The Free Lance-Star.

But according to Mike, his brother had regrets about not being vaccinated once he got sick, calling his mother from his hospital bed to apologize for not getting the vaccine.

As the family grieves the couple's death, they're angry that people are not getting vaccinated.

"Part of our pain is anger," Mike told the newspaper. "Anger because people are still not getting the vaccine. If you think about it, you need to have certain vaccines before you can even go to school. What's the big deal about this one?"

The family will be having a life celebration service on October 16, and masks are required. But people have already begun to remember Mitchem online, with one person who had worked with him writing on the GoFundMe: "He worked hard. He always 'showed up.' Kevin was upbeat, positive, always had a joke and always wore a smile. Basically, he was a really good guy."

Others have shared their sympathy for the surviving family members, with another person commenting, "Praying for those precious children and their new caregivers, may God give them strength and comfort in the coming days."

Getting the COVID-19 Vaccine: What to Expect Before, During, and After Your Appointment
Was this page helpful? 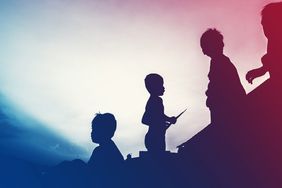