An alarming new CDC report cited several cases of people ingesting a product that's only supposed to be applied to skin.

The Centers for Disease Control and Prevention (CDC) is warning people not to drink hand sanitizer after several have become sick and even died from the practice.

"Alcohol-based hand sanitizer products should never be ingested," the CDC said in a new report released earlier this week. The report detailed that, from May 1 through June 30, there were 15 cases of methanol poisoning in Arizona and New Mexico, after people between the ages of 21 and 65 swallowed alcohol-based hand sanitizers. Four patients died, and three were discharged from the hospital with “visual impairment.” Others suffered from seizures.

The CDC report specifically mentioned a 44-year-old man who said he drank hand sanitizer a few days before seeking help. He ended up hospitalized for six days for acute methanol poisoning and was discharged with “near-total” vision loss, the report says.

This report focused on hand sanitizers that contained methanol, a toxic form of alcohol. To be effective against bacteria and viruses, including the new coronavirus, sanitizers should contain at least 60% ethanol alcohol or 70% isopropanol as active ingredients, states the CDC. (Benzalkonium chloride may also help, but the CDC lists it as “less reliable” against certain bacteria and viruses.)

In June, the Food and Drug Administration (FDA) warned people against using hand sanitizers that contain methanol. “Methanol is not an acceptable ingredient for hand sanitizers and should not be used due to its toxic effects,” the FDA wrote in an advisory. The FDA originally cited nine different brands that used methanol in their hand sanitizer, but that list has since expanded.

It’s not clear why people decided to drink hand sanitizer in these situations, and the CDC didn’t offer up details. But it could be that people are misunderstanding the CDC and FDA advisories about hand sanitizer, or fear of contracting COVID-19 is leading people to make risky decisions when it comes to staying safe.

Can You Leave Hand Sanitizer in Your Car? Here's What Experts Say

Why is it so bad to drink hand sanitizer?

You probably already know this, but apparently it bears repeating: Regardless of what’s in your hand sanitizer, it’s not a good idea to drink it. “Hand sanitizers many contain products that are harmful when swallowed, and they should not be consumed by mouth,” Jamie K. Alan, PhD, assistant professor of pharmacology and toxicology at Michigan State University, tells Health. “They should only be used on the skin, as intended.”

While drinking large amounts of hand sanitizer can make you sick, "you can also get drunk from it," Eric Adkins, MD, an emergency room physician at The Ohio State University Wexner Medical Center, tells Health. Hand sanitizer with ethanol contains at least 60% of the alcohol, while vodka's alcohol by volume generally starts around 40%, he says. "You're going to get the typical effects from alcohol, and bad things can happen," he says.

Sanitizers that contain methanol are particularly dangerous, Alan says. The FDA specifically warns that being exposed to substantial amounts of methanol can lead to nausea, vomiting, headaches, and blurred vision. More serious side effects include permanent blindness, seizures, coma, ermanent damage to your nervous system, and even death.

Even your standard, non-methanol hand sanitizer can damage to your health, Susan Besser, MD, a primary care physician at Mercy Medical Center in Baltimore, tells Health. “Upset stomach is the least that can happen,” she says, noting that this can also cause “serious liver damage.”

Hand sanitizer can also contain coloring and fragrance, and these could potentially make you sick, Alan says.

What’s the right way to use hand sanitizer?

The CDC has pretty specific directions online about how to properly use hand sanitizer. When shopping for it, look for an alcohol-based sanitizer that contains at least 60% alcohol. Put enough sanitizer on your hands to cover all surfaces, and rub your hands together until they feel dry (usually about 20 seconds). Don’t rinse or wipe the sanitizer off your hands before it’s dry. Otherwise, it may not work well.

And again, please don’t even think about drinking hand sanitizer. “These hand sanitizers are formulated to work directly on the skin, and are not meant to be taken internally,” Alan says. 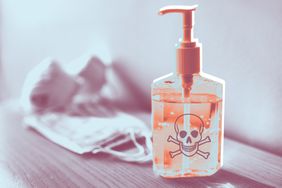 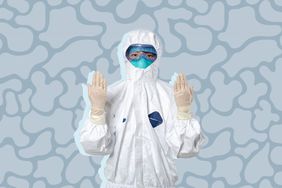