Women have shared personal stories about this on social media, so we asked experts if period changes could be a side effect of vaccination.

Korin Miller
Korin Miller is a freelance writer specializing in general wellness, sexual health and relationships, shopping, and lifestyle trends, with work appearing in Women’s Health, Self, Prevention, Forbes, Daily Beast, and more. As a health journalist, Korin has reported heavily on everything from COVID-19 to mental health, with a little of everything in between.
health's editorial guidelines
Medically reviewed by
Kashif J. Piracha, MD

The COVID-19 vaccine can come with many normal side effects, like fever, chills, and muscle pain. So it's only natural to wonder if it can temporarily influence other aspects of your health, like your menstrual cycle.

First, there's no reason not to get vaccinated when you have your period; neither the Centers for Disease Control and Prevention (CDC) nor the American College of Obstetricians and Gynecologists (ACOG) lists having your period as a reason to put off getting the vaccine.

But in terms of how the vaccine affects menstruation in general, back in early 2021, some women took to social media to talk about how they were suddenly experiencing heavier-than-normal periods after getting vaccinated.

In a lengthy Twitter thread, University of Illinois associate professor Kate Clancy, PhD, had this to say: "A colleague told me she has heard from others that their periods were heavy post-vax. I'm curious whether other menstruators have noticed changes too? I'm a week and a half out from dose 1 of Moderna, got my period maybe a day or so early, and am gushing like I'm in my 20s again."

Other people chimed in with their own stories. "I am exactly 1 week after my Moderna 2nd shot and I started a very heavy cycle for me, and im about 2.5 weeks early," one wrote. "I got the Moderna on the last day of my period. Nine (!!!!) days later another period appeared and has been a nightmare," commented another.

The personal stories continued. "I am 3 weeks out from my first Moderna shot and started my period in the middle of a [birth control] pack," one wrote. "That's never happened to me in 12 years of taking the pill. I never even spot between periods."

Clancy said in a later tweet that her period "wasn't nearly as bad as after the first shot," and that she expects that her next period will "be back to what's typical for me." She also said that she and her colleague are planning to study this phenomenon further.

So are period changes a legit side effect of the vaccine?

Is There any Research on COVID-19 Vaccines and Menstrual Cycles?

The CDC has a Vaccine Adverse Event Reporting System (VAERS), which is a surveillance program where anyone can report the side effects they experienced after getting the vaccine. And while there have been reports of menstrual irregularities on VAERS, there aren't necessarily enough reports to apply to the general public. Because of this and reports on social media saying that periods were affected by the COVID-19 vaccines, in January 2022, researchers did a cohort study to compare cycle and menses length in the vaccinated versus unvaccinated. Their results suggest that the COVID-19 vaccination is associated with a small—but not clinically significant—change in cycle length.

OK, so What Could be Going on Here?

Experts said it's really hard to know for sure. For those women who reported more pain than usual, "it may be that aches and pains post-vaccine compound normal menstrual pains," infectious disease expert Amesh A. Adalja, MD, senior scholar at the Johns Hopkins Center for Health Security in Maryland, told Health.

The heavier flow is a little trickier to explain. A small study of 233 women of childbearing age with clinically diagnosed COVID-19 reported some menstrual changes. Of the 177 patients with records about their periods, 25% had "menstrual volume changes," 20% had a lighter-than-usual period, and 19% had a longer-than-usual cycle, according to the study, which was published in January 2021 in the journal Reproductive BioMedicine Online. It's possible that the COVID-19 vaccine could have a similar effect, but more research needs to be done.

There's also the possibility that stress could play a role. Stress can be an annoying and somewhat vague excuse for period-related changes. Still, it's a real possibility, Gloria A. Bachmann, MD, associate dean for women's health at the Rutgers Robert Wood Johnson Medical School in New Jersey, told Health. "Menstrual cycles can be altered or influenced by many factors, including stress, poor sleep, exercise, and some medications," said Dr. Bachmann. "Therefore, it wouldn't be that unusual for some women to notice, after receiving the vaccination, changes in their period, such as it coming on earlier, or having a heavier flow, or noticing more cramping than they usually have."

The idea that a vaccine might affect a woman's cycle is a tough one to explain from a biological standpoint, though, Mark Turrentine, MD, professor of obstetrics and gynecology at Baylor College of Medicine in Texas, told Health. "There is no biologic mechanism that would account for [the] disruption of the menstrual cycle following receipt of the COVID-19 vaccine," said Dr. Turrentine. Dr. Turrentine also pointed out that unusual vaginal bleeding "was not a side effect reported in any of the clinical trials from the vaccine manufacturers."

Despite the personal stories from women online, women's health expert Jennifer Wider, MD, told Health that there just isn't enough data to show that the vaccine could impact menstrual cycles. "Could the vaccine interact with the body's hormones, or are there other factors at play like stress? That remains to be seen," said Dr. Wider.

Can You Drink Alcohol After Getting the COVID-19 Vaccine? Here's What Doctors Recommend

What Happens if my Period Changes After I Get Vaccinated?

First, don't panic. While it could just be one of those things that can occur following a vaccine, it also may be a sign of something else going on that coincidentally showed up after you were vaccinated.

If the unexplained change persists, call your doctor. "Although the menstrual changes can be due to the COVID-19 vaccination, it's always better to discuss the situation with your health care provider as certain evaluation and tests, such as a gynecologic exam or pelvic ultrasound, may be indicated," said Dr. Bachmann. 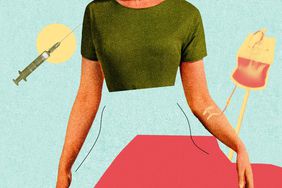 Side Effects From the COVID-19 Booster Shot
What Are the Differences Between the Pfizer and Moderna COVID-19 Vaccines?