While Chad Dorrill's family and friends mourn, people are wondering how someone so young, fit, and healthy could die from the coronavirus.

Chad Dorrill, a 19-year-old sophomore at Appalachian State University in Boone, North Carolina, tested positive for COVID-19 on September 7. Three weeks later, after developing serious neurological complications from the virus, he was taken off life support. His family and friends are shocked that someone so young and healthy could die from the disease.

Chad’s uncle, David Dorrill, told The New York Times that the student, a basketball player and long-distance runner, was in “tremendous shape.”

“He was healthy... Skinny. Could run six miles without any issue. He ran with us less than three weeks ago, in fact. He was healthy—until this hit,” David said.

Are Swollen Glands a Sign of COVID-19? Here's What Experts Say

On Tuesday, the university’s chancellor, Sheri Everts, wrote a message to students sharing the sad news. “Chad’s family has shared he had been diagnosed with COVID-19 earlier this month and suffered from later complications,” Everts wrote. “Chad lived off-campus in Boone and all of his classes were online. When he began feeling unwell earlier this month, his mother encouraged him to come home, quarantine, and be tested for COVID-19.

After Chad tested positive for COVID-19 back home in Davidson County, NC, he isolated before being cleared by his doctor to return to Boone. It was after his return to Boone that he had additional complications, was picked up by his family, and hospitalized, Evert revealed.

David told The New York Times what happened before Chad was hospitalized. “When he tried to get out of bed his legs were not working, and my brother had to carry him to the car and take him to the emergency room,” he said. “The doctor said it was a one-in-a-million case—that they’d never seen something progress the way it did. It was a COVID complication that rather than attacking his respiratory system attacked his brain.”

Tonia Maxcy, a family friend who taught Chad in high school, told The New York Times that doctors told the family they suspected Chad had a previously undetected case of Guillain-Barré syndrome, a rare neurological disorder in which the body’s immune system attacks nerves.

A University College London (UCL) study, published in the journal Brain in July, found that COVID-19 could cause neurological complications like stroke, nerve damage, and brain inflammation, as well as disorders like Guillain-Barré syndrome.

Although severe cases of neurological complications due to COVID-19 may be rare, it’s extremely difficult for doctors to identify those cases early enough to avoid serious damage. Patients who don’t report severe respiratory symptoms, such as breathing difficulties, are unlikely to be tested for neurological complications. “Some patients go from no symptoms and a normal outcome to multiple organ failure and even death,” William C. Davison MD, FAAN, neurologist at Northwestern Medicine Lake Forest Hospital, Illinois, previously told Health. “As far as I know, we cannot yet explain the large spectrum of symptoms and outcomes from COVID-19.”

New findings published this month reveal how severely COVID-19 can affect young adults, even those close in age to Dorrill. A research paper published in JAMA Internal Medicine found that among more than 3,200 adults ages 18 to 34 who were hospitalized with the disease, 21% required intensive care, 10% required mechanical ventilation and nearly 3%—88 patients—died. Of those who survived, 3%—99 patients—had to be discharged to another health care facility to continue their recoveries.

In a commentary that accompanied the paper, JAMA Internal Medicine's deputy editor, Mitchell Katz, MD, president and CEO of NYC Health and Hospitals, wrote that the findings show that "COVID-19 does not spare young people."

One example of a young person close to Dorrill's age whose death has been linked to the virus is Jamain Stephens, a football player at California University of Pennsylvania. Stephens died on September 9 from a blood clot in his heart after contracting the virus, his family revealed in an interview with CBS News.

“While it’s unlikely that a young, otherwise healthy person has a severe case of COVID-19, it can happen,” infectious disease expert Amesh A. Adalja, MD, senior scholar at the Johns Hopkins Center for Health Security in Maryland, tells Health. Dr. Adalja believes that it’s likely due to an undefined genetic predisposition that places these young people at higher risk for having a complicated case—and he hypothesizes that this applies to all cases, including neurological complications and cardiovascular issues.

But if a young person doesn’t know about an undefined genetic predisposition, what can they do to help reduce the risk of serious COVID-19 complications? Basically, what we should all be doing, Dr. Adalja says. Do everything possible to avoid infection and if infected, keep track of symptoms and their severity, and seek medical attention at the earliest possible opportunity if necessary.

Can You Develop Severe Psychotic Symptoms From COVID-19?
How Does COVID-19 Affect the Brain? 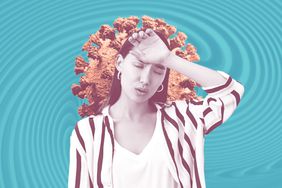