Steve Walsh, 53, has apparently fully recovered from the illness—but he's still in quarantine.

As the 2019 novel coronavirus—now, officially named COVID-19, per the World Health Organization—continues to spread around the world, doctors have zeroed in on one man who reportedly passed the illness on to at least 11 other people, in hopes of further keeping the virus under control.

Steve Walsh, who lives in the UK, unknowingly contracted COVID-19 while at a conference in Singapore, according to Yahoo News UK. From there, he traveled to France where he spent several days at as ski chalet, ultimately infecting five Britons with the disease. Since then, he has been linked to at least one case in Spain and five additional cases in the UK—including two doctors.

All of this, of course, has earned Walsh the moniker of "super-spreader," due to the fact that he unintentionally infected several others with COVID-19. While he has reportedly fully recovered from the illness, Walsh is still in quarantine at Guy's Hospital in London. "I would like to thank the NHS for their help and care–whilst I have fully recovered, my thoughts are with others who have contracted coronavirus," he said in a statement, per Yahoo News

"As soon as I knew I had been exposed to a confirmed case of coronavirus, I contacted my GP, NHS 111 and Public Health England," he continued. "I was advised to attend an isolated room at hospital, despite showing no symptoms, and subsequently self-isolated at home as instructed. When the diagnosis was confirmed I was sent to an isolation unit in hospital, where I remain, and, as a precaution, my family was also asked to isolate themselves."

What exactly is a super-spreader—and how do they shape an outbreak?

Typically, it's thought that all people who have an infection are equally contagious—but that's not necessarily the case, Manisha Juthani, MD, a Yale Medicine infectious disease specialist, tells Health.

"We know from our experience with many infectious diseases that a small group of individuals often are responsible for most transmission events," she says. "Some people are able to infect others more easily. These individuals are called super-spreaders." According to Dr. Juthani, approximately 20% of people infected with a contagious infectious disease are thought to account for 80% of transmission events, often referred to as the 20/80 rule.

According to Jeremy Brown, MD, director of the Office of Emergency Care Research at the National Institutes of Health and author of Influenza: The Hundred-Year Hunt to Cure the Deadliest Disease in History, super-spreaders may not even become ill with the virus. He points to Typhoid Mary, who in the early 1900s, was an asymptomatic carrier of Salmonella typhi, the agent causing Typhoid Fever. “She infected 51 people, and three of them died,” adds Dr. Juthani.

But the term super-spreader is not specific to COVID-19; it's actually been used for many decades for several infectious diseases. “We saw how super-spreaders during the SARS pandemic accounted for most of the transmission event,” Dr. Juthani says. Super-spreaders have also been identified in outbreaks of tuberculosis, measles, Ebola, and HIV. Super-spreading is also not unique to human beings. “Even animals can be super-spreaders of infections among their own species,” says Dr. Juthani.

But, as for what specifically makes someone a super-spreader, Dr. Juthani says no one really knows for sure. People who do a great deal of traveling and are exposed to an abundance of people—like Walsh—are more likely to be super-spreaders, but Dr. Juthani says it may be due to a combination of factors associated with the person and those of the infectious agent. "One theory is that co-infection with another infectious disease at the same time [like, if a person is infected with influenza and COVID-19] could make a person more infectious,” she says. “It is also possible that a particular strain is more infectious or that a super-spreader is shedding more of the infectious agent.”

And according to Dr. Brown, Walsh may not even technically be a super-spreader for COVID-19. "It seems to me to be very premature to give this title to a person in connection to the coronavirus," he says.

Since it's still unclear how to limit super-spreading in any case—and especially since it's unknown for sure that COVID-19 is victim to super-spreaders—it's best to keep using the same precautions used to limit the spread of all respiratory illnesses, like washing your hands and covering your mouth when coughing). And of course, if there is any chance you are infected with COVID-19, it is important to contact your doctor immediately and avoid unnecessary contact with other people until you have been cleared. 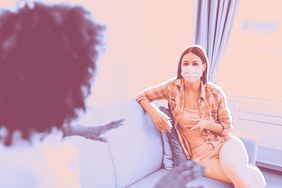