The germ-free position might not be the best option after all.

When you're using the restroom in public—at a bar, the gym, or a convenience store—you'll sometimes want to avoid sitting on the toilet seat. Instead, you may decide to give the restroom a pass or, if you really have to go, hover or squat over the toilet so you don't have to make contact with the seat.

In a January 2019 International Journal of Environmental Research and Public Health review, researchers investigated women's toileting behaviors. They noted that individuals were worried about the cleanliness of public toilets and how using them could affect their health. They also found that some participants avoided public restrooms altogether, eliminating the need to even consider sharing one with strangers.

If you must use one when you're out, squatting can make sense. However, there are other options that might be more beneficial.

What Happens When You Squat or Hover Over a Toilet Seat?

"When you don't completely sit down, your muscles are not completely relaxed," Carol Figuers, EdD, professor and director of student affairs in the doctor of physical therapy division at Duke University School of Medicine, told Health.

Further, as you squat over the seat, your pelvic floor muscles are probably still 30% or 40% tensed, said Dr. Figuers. "When you stand back up, you'll still have a little bit of urine left in there because the muscles didn't completely relax." With urine left inside your bladder, you risk an accidental leak if you jump, cough, laugh, or sneeze.

Plus, that "old" urine you're carrying around can irritate the inside of the bladder, said Dr. Figuers, making you feel as if you've got to go more often or more urgently than you really do.

What to Do Instead of Squatting

You have options if you'd rather not sit directly on the toilet seat.

In a 2019 study of 24 women published in BMC Women's Health, researchers investigated the behaviors used to lessen worries about the cleanliness of public toilets. Beyond squatting or hovering, the women used methods including "lining or padding the toilet seat with tissue paper, (using) tissue toilet seat covers, or paper towels, pushing urine out to empty the bladder quickly, not waiting to empty the bladder completely, and cleaning and wiping the toilet seat before sitting on it."

Dr. Figuers recommended making a "nice nest of toilet paper to sit on" or using a paper seat cover if the bathroom in question is kind enough to provide one. Though Dr. Figuers said it is extremely unlikely you'll catch anything from a toilet seat, the idea of it is powerful. "Nobody wants to sit on a nasty toilet."

As for squatting, that, too, is not something you want to do routinely. It's probably fine to hover once in a while, said Dr. Figuers. "But don't make it a habit." 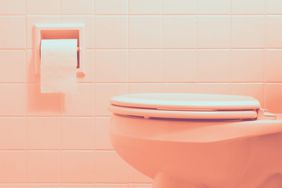 Can You Get an STI From a Toilet Seat? 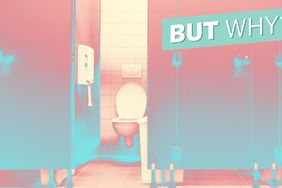 Constipation Remedies to Try When You Can't Poop
Why Do We Dance When We Need to Pee?