Lee, 32, has been living with herpes for five years. Here's how she got over feeling shamed and realized this STI doesn't get in the way of great sex.

I know exactly where I got herpes. I slept with this really cute guy from out of state with whom I thought I was building a relationship. I caught herpes from him when I was visiting him. We only slept together twice.

Less than a week later, I had my first outbreak. Initially I didn't know what it was. I couldn't really see it; I just felt it. When I took a mirror to it, it looked like an ingrown hair gone awry. It was a painful blister. I went to see a doctor and the doc said, "I have to take samples first, but I think it's herpes." I didn't even know what this STI was—but now I'd be living with herpes for the rest of my life.

I'm pretty sure he knew he had it

I felt ashamed, dirty, all those things. I had to get an STI that doesn't go away. It's a stigma that gets attached to you and it's rough. I couldn't stop beating myself up for being so careless. The guy didn't have symptoms—but I wouldn't have even known what to look for.

I remember wavering on whether I believed he didn't know he had it. I can't imagine someone being so thoughtless or heartless to subject me to this, knowing that he had it. But I'm pretty sure he knew. He seemed way too calm when I asked him.

The first year, my outbreaks were wild. I had them all the time. I didn't know how to control them. And I was depressed all the time. I remember crying on my best friend's shoulder.

Later I took the antiviral prescription drugs Famvir and Zovirax every day to suppress the virus and prevent outbreaks. Valtrex, another antiviral drug, works the best for me. I also did everything I could to avoid outbreaks—trying to work out, getting more sleep, not being stressed out all the time. I don't take the antiviral medication every day anymore. I will take it when I feel like I'm going to have an outbreak.

I generally know when an outbreak is coming. The tingling is definitely real. That area is extra-sensitive. It may not hurt, per se, but it feels like an extra set of nerves and the sensitivity starts to grow over the course of a few days. It generally happens when I'm coming close to my period. I don't have sex during that time.

How to Tell if You Have Herpes

Having support made a big difference

I talked openly with friends about how I felt. That was good because I found people who were in my same boat. The people leading the support group I went to were also somewhat helpful. They say you need to be confident when starting a new relationship and tell someone your status from the beginning. They basically said that how you deliver it determines how the person is going to take it. If you tell them you want to protect them, you're building trust and helping them to have a better reaction.

Dating was so difficult at first. I totally avoided sex initially. But now I don't care what the reaction is. I tell everyone who needs to know. I discovered quite quickly that honesty really is the best policy and I haven't experienced a rejection since. I learned to be honest, say it up front, and let them know that it doesn't have to get in the way of great sex.

I met one of my boyfriends on a dating site for people with herpes. But I realized that I didn't want to rely on those sites. I felt like I was chickening out by not opening myself up to people without herpes. I felt like it was a big shameful secret that I had to hide. I didn't want it to be a source of shame anymore. And I ended up meeting somebody who was wonderful and I told him before we had sex.

What I told my boyfriend about living with herpes

I've been with my boyfriend for almost three years and I know he wants to marry me. We have a very satisfying sex life. We use condoms for sex and practice abstinence whenever I have any shadow of a doubt. I have outbreaks a few times a year now, not very many. I abstain for seven to 10 days. I like to give it a few extra days to be on the safe side.

We do go without condoms at times. That's our choice. He's aware of the risks and he's had no complaints to date. I told him from the very beginning what it was, how I wanted to protect him, when we couldn't have sex, what kind of protection was best. Everything. I made sure to tell him that herpes as a transmissible condition, but it comes and goes. It's like the turtle with its head in a shell; it sticks its head out when it wants.

When I met my boyfriend, I told him we had to go on a number of dates before sex—it was 20 dates. There was no pressure and it wasn't a big thing but one night, as things took their natural course, and we kissed and hugged, I said, "I have to tell you something, but I don't want to freak you out. I have—I have a skin irritation, it's a disease and it's herpes. I have an outbreak every once in a while and I can't have sex for a few days or a week. It's not going to kill you. I know when it's coming and I can protect you from it. It's not a huge deal for me, but it's something you should be aware of. You should do research, and if you have questions, I'm here to help. There's nothing I can do about it, but I'm telling you because I care about you."

As told to Louise Sloan 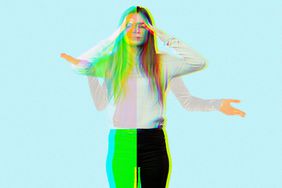