Yep, Herpes simplex virus (HSV) can infect your eyes, too.

With the correct treatment, eye herpes or herpes keratitis is usually a treatable infection, but that doesn't make it any less alarming.

Scary Spice, Melanie Brown (Mel B) of the Spice Girls, had just such a frightening health scare. Melanie has recovered after being temporarily blinded from a herpes outbreak in her eye, according to People. The singer, at age 43, was hospitalized after she temporarily lost sight in her right eye.

"She's doing fine now; she's not blind," a source told People. "This has happened before. She has herpes in her eye, so this can happen."

"She told the doctor she was blind because she couldn't see, but her eye is OK," the source added. "They gave her some drops, and she's good now. It was nothing major."

How does someone get herpes in their eye, anyway? Eye herpes, or herpes keratitis, is an actual infection, Health previously reported. It's caused by the herpes simplex virus, which is the same virus responsible for cold sores and genital herpes.

Once someone becomes infected with HSV—which typically happens through skin-to-skin contact with another person who has active lesions from the virus—it can lie dormant for years, reactivating at any time. Stress, fever, sun exposure, menstruation, and certain medications have all been linked to a herpes keratitis flare-up, according to the American Academy of Ophthalmology (AAO).

Symptoms of an eye herpes infection include eye redness, eye pain, tearing, sensitivity to light, headache, and reduced vision linked to eye pain or eye redness. In Mel B's case, she was right to be worried. An eye herpes flare-up can scar the cornea, which may lead to vision loss or blindness.

Treatment and What You Should Avoid

Most mild herpes keratitis flare-ups can be treated with antiviral medication. The AAO recommends avoiding touching your eyes if you have a cold sore (so you don't transmit oral herpes to your eye accidentally) and to stop wearing contact lenses if you get repeat infections. 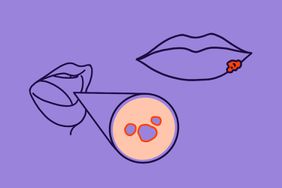 Is It a Canker Sore or a Cold Sore?–Differences, Causes, and Treatment