How much black licorice is too much—and can it have some health benefits when eaten in moderation?

In 2017, the Food and Drug Administration (FDA) reported that eating two ounces of black licorice per day for at least two weeks could prompt an arrhythmia (an abnormal heart rhythm) in adults 40 and older.

So is black licorice bad for you? Let's take a quick look at what the research says.

According to a review of the literature published in the journal Therapeutic Advances in Psychopharmacology, black licorice has been used for thousands of years in traditional Chinese, herbal, and Ayurvedic (Indian) medicine. It's popular in these natural non-pharmacological therapies because licorice contains a lot of potentially healthy components, including ones that have anti-inflammatory, antioxidant, antiviral, anticancer, hepatoprotective (protects the liver), and neuroprotective (prevents nerve cell death) properties. Study authors state that licorice also appears to have antidepressant actions and can be helpful for pain management.

Black licorice has also been shown to help with the symptoms that accompany metabolic syndrome, according to the authors of a 2021 review published in Advances in Experimental Medicine and Biology. Metabolic syndrome is characterized by insulin resistance, high blood pressure, high cholesterol, and excessive belly fat. This review found that black licorice seems to lower high blood sugar and high cholesterol. On the flip side, though, it tends to increase blood pressure, which is not good for those whose blood pressure is already on the high side.

In another 2021 review published in Oxidative Medicine and Cellular Longevity, researchers examined what black licorice is made of and its benefits. They found that it has antioxidant, antimicrobial (reduces bacteria and mold), anti-inflammatory, antiproliferative (slows or stops the spread of cells, including malignant cells, into surrounding tissues), and cytotoxic (prevents cell growth, like in the case of cancer cells) effects. In other words, it has many health benefits, which may be why it's been used in Chinese and Ayurvedic medicine for thousands of years.

So, with all of these alleged benefits, why did the FDA issue its warning? Is it really that dangerous?

The Dark Side of Black Licorice

First, it's important to note that the FDA didn't ban black licorice. According to the FDA, black licorice is "generally regarded as safe" (GRAS). It is included on the FDA's additives list, as it's used as a flavoring and sweetening agent in soft drinks, teas, and other consumer products. The FDA warned that black licorice could become toxic when eaten in excess.

Here's why: The main component in black licorice is glycyrrhizin, a sweet compound in licorice root. When consumed in high amounts, glycyrrhizin causes potassium levels to drop temporarily, which may cause abnormal heart rhythms, high blood pressure, swelling, lethargy, and, in extreme cases, even heart failure, according to a 2012 study published in Therapeutic Advances in Endocrinology and Metabolism. These issues typically go away once consumption stops, though the study claims that health benefits are insignificant compared to the potential for ill effects.

Case in point: A 2021 study published in the journal Deutsches Arzteblatt International discusses one medical center that admitted six patients between 2018 and 2020 to the ICU with black licorice toxicity. All six patients were admitted with hypertension (high blood pressure), hypokalemia (low potassium), and heart arrhythmias (abnormal heart rhythms). In addition, the patients also reported muscle weakness and pain, heart palpitations, and even some paralysis. One of the patients had to be resuscitated due to a potentially fatal heart rhythm. Thankfully, all six patients recovered with the help of potassium replacement therapy in addition to a type of diuretic.

The FDA regulates the amount of glycyrrhizin permitted in our foods, though tolerance may vary from person to person.

For fans of black licorice, the FDA recommends eating it in moderation (check the label for the serving size and stick with it) and contacting your healthcare provider immediately if you experience irregular heart rhythms or muscle weakness after indulging.

Also, licorice may interact poorly with certain drugs, such as aspirin, oral contraceptives, and herbal supplements, so if you're taking any medications—or if you have hypertension, heart disease, or kidney disease—you may want to speak with a doctor before digging in.

According to the National Center for Complementary and Integrative Health (NCCIH), overindulging in black licorice during pregnancy has been shown to increase the chances of premature birth and problems in the baby, so it might be best to forgo it during pregnancy.

Also of note: According to the NCCIH, some candies sold in the US—including some labeled as "black licorice"—don't contain licorice. They are made with anise oil, which smells and tastes like black licorice, and may be a smart alternative.

Like many things, black licorice can probably be enjoyed in moderation. Just be sure to avoid over-indulging and watch how you feel afterward.

What Are the Worst Herbs for Heart Health? 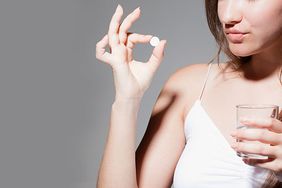