Thunderclap headaches are sudden and intense—and need to be taken seriously.

Medically reviewed by Michael Menna, DO

Dr. Michael Menna is currently an attending emergency medicine physician at White Plains Hospital in White Plains, New York, with nearly 10 years of experience. He also works at an urgent care center, addressing more general conditions, and provides telemedicine services to patients across the country. Dr. Menna received his degree from New York Institute of Technology, College of Osteopathic Medicine in Old Westbury, New York. He completed his residency in emergency medicine at Mount Sinai Beth Israel in New York City, where he served as chief resident. He is board-certified in emergency medicine by the American Board of Emergency Medicine.

There may be a cautionary tale in a February 2018 BMJ Case Reports journal. According to doctors at Bassett Medical Center in Cooperstown, New York, a patient there developed excruciatingly painful headaches—known as thunderclap headaches—after eating the world's hottest chili pepper.

It all started when the unidentified 34-year-old male entered a hot-pepper-eating contest, during which he consumed one Carolina Reaper pepper. The little red fruit was bred specifically for its spiciness, and it currently holds the Guinness World Record for the highest number of Scoville Heat Units, a measurement of chemical compounds called capsaicinoids that give the pepper its spice.

The man immediately began dry heaving, or retching without producing anything, which wasn't terribly surprising. But he also experienced several seconds of intense head and neck pain. The sudden pain was so bad—and returned several times over the next few days—that he wound up in the emergency room.

In the ER, a computed tomography (CT) scan showed that several arteries in the man's brain were narrower than they should be, prompting his doctors to diagnose him with "thunderclap headaches," which are caused by a condition called reversible cerebral vasoconstriction syndrome (RCVS).

Luckily, the patient's headaches went away on their own, and a second scan five weeks later showed that his arteries had returned to normal. But his experience raised several questions—such as, what is a thunderclap headache, and is it dangerous? And is it normal to get them from spicy foods?

What are thunderclap headaches?

Thunderclap headaches come on very suddenly and usually last less than five minutes, Troy Madsen, MD, an emergency medicine researcher at the University of Utah, told Health. "They hit you just like a crack of lightning and that sound of thunder. It's all of a sudden, out of nowhere, 10-out-of-10 pain that reaches its maximum intensity within seconds."

While some thunderclap headaches happen without a known cause and are considered benign, they can also signal an increase or decrease of blood flow to the brain. For example, they can occur as the result of a stroke, a hemorrhage following a head injury, or a sudden change in blood pressure.

In about 10% of cases, said Dr. Madsen, they can signify a ruptured brain aneurysm. An aneurysm is a condition in which the wall of an artery bulges, according to the National Library of Medicine MedlinePlus resource. Large bulges can rupture with severe or even fatal consequences.

"That's what's so concerning with these types of headaches that come on so quickly," said Dr. Madsen. "It's different from someone who comes in with a history of migraines, or from another type of headache that comes on as a low rumble that gradually gets louder."

Who's at risk for a thunderclap headache?

In the BMJ Case Reports article, the patient's headaches were due to RCVS, a temporary condition in which blood vessels spasm and become narrow, limiting blood flow to the brain. Some people's brains may be naturally prone to RCVS, but the headaches can also be caused by some medications (including birth control pills), marijuana, or illicit drugs such as cocaine, and other stimulants. It's also more common—and tends to be more severe—in women.

Can eating spicy foods cause a thunderclap headache?

In the case of the chili pepper eater, authors wrote they couldn't be sure that eating a Carolina Reaper caused those changes in the patient's blood vessels and his subsequent headaches, and they noted that this is the first case in scientific literature to link spicy food with problems such as these.

But eating capsaicin, the chemical responsible for a pepper's heat, had been linked to heart attacks and sudden constriction of the coronary artery, the authors pointed out. Because the compound had been shown to affect blood vessels, they wrote in their paper, it's "plausible" that it was also the culprit in this case.

A similar case study was published in 2020 in the journal Radiology Case Reports. It described a 15-year-old male who had also ingested a Carolina Reaper and gotten an RCVS diagnosis. In their conclusion, the authors of the 2020 report said, "RCVS should be considered in patients who present with severe headache after ingestion of ultra-spicy peppers."

Dr. Madsen said that he'd never seen a thunderclap headache case tied to spicy foods, but the possibility didn't surprise him. "I've definitely had people describe certain types of foods as triggers for other types of headaches. For some people, it's spicy foods; for others, it's things like chocolate or cheese."

While Dr. Madsen hadn't examined the 2018 case report subject himself, he said it's likely that this patient would be at heightened risk for headaches in the future. "For whatever reason, the blood vessels in his brain were clamping down. He'll probably want to be monitored by a neurologist now and try to identify triggers, whether it's spicy food or something else."

What can trigger a thunderclap headache?

Other thunderclap headache triggers can include sudden temperature changes, loud noises, and strenuous exercise. And while some people get them with no apparent underlying health problem, Dr. Madsen said it's always smart to get them checked out.

"If a patient comes in and says, 'I have this sudden severe headache, but this happens to me every month, and I've had all the tests done,' I'm less concerned," said Dr. Madsen. "But if it's a first-time thing and someone has these symptoms, I'm definitely giving them a CT scan to look for bleeding in the brain or other serious problems."

What are the risks of eating spicy foods?

"When we're talking about something that spicy, you always have to be a little careful—and if someone has an underlying issue, like cardiac or vascular disease, it's possible that spicy food could trigger a stress response and make things worse," said Dr. Madsen.

Eating super spicy peppers can also cause stomach discomfort, numbness, and breathing difficulties. And if you vomit them up—a very real possibility—your stomach acid can also damage the esophagus (the "muscular tube that carries food and liquids from your mouth to the stomach," according to MedlinePlus).

So what can we learn from this unfortunate incident? First, spicy foods may be best consumed in moderation. But perhaps more importantly, if you do experience one of these thunderclap headaches—peppers or no peppers—see a medical professional, stat.

"If it comes on that quickly and it's unlike any headache you've ever had before, you really need to get it checked out, even if it feels better a few minutes later," said Dr. Madsen. "These are higher-risk headaches, and their underlying conditions may need immediate treatment, so it's better to be safe than sorry." 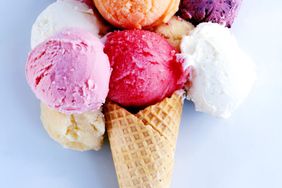 What Exactly Is Brain Freeze and How Do I Make It Stop?