A runny nose just might be a runny nose, but a CSF leak could still be a possible cause of your nasal discharge.

When you have a runny nose, you can usually connect it to having a cold or allergies. However, if you are frequently grabbing tissues beyond having cold and allergy symptoms, it's possible that there may be another cause: a cerebrospinal fluid (CSF) leak.

A CSF leak is when CSF drains from a tear or hole in the membrane that surrounds the brain and spinal cord. The resulting drainage can escape from a person's nose—appearing just like a runny nose.

So how worried should we be about a CSF leak when our noses won't stop running? To put things in perspective, Health spoke with Chirag Patel, MD, an ear, nose, and throat doctor at Loyola Medicine who has specialized in CSF leaks and has treated them often.

What Exactly Is Cerebrospinal Fluid?

"Cerebrospinal fluid is the clear, watery fluid that surrounds and protects the brain," Dr. Patel said. CSF allows for water, small molecules, and proteins to move between the functioning tissue of the brain and blood from arteries and veins, as noted in a Frontiers in Aging Neuroscience study published in April 2019.

Additionally, MedlinePlus says that CSF acts as a cushion to help protect your brain and spinal cord from injury. "It provides some buffering, and it exists at a certain pressure that has to be kept pretty consistent," Dr. Patel added.

How Can You Tell the Difference Between a Runny Nose and a CSF Leak?

A runny nose will usually clear up with the assistance of cold and allergy medications. But when it comes to a CSF leak, it isn't just any runny nose, Dr. Patel said. "Usually with a CSF leak, the dripping is only on one side of the nose—and it drips constantly, like a faucet," Dr. Patel added. "Also, if it has a salty or metallic taste, that's a sign that it could be spinal fluid."

CSF leaks can be initially diagnosed as sinus problems or allergies because a runny nose is one of the most common symptoms. Additionally, the clear nasal discharge from a regular runny nose that, for example, might be due to allergies or being out in colder weather can look very similar to cerebrospinal fluid leakage.

Of note, CSF leaks can also occur in the ear, according to an October 2017 study in Laryngoscope Investigative Otolaryngology. "If the leak is in the ear, it can cause hearing loss and a sense that the ear is clogged," Dr. Patel said. "When the ear gets examined, the doctor sees fluid behind the ear drum."

Still, Dr. Patel added, "there are a lot of reasons you might have a runny nose or a clogged ear, and this would usually be lower on the list of possible causes." In other words, you don't have to be concerned about every sign of allergies or a simple cold as a potential symptom of a CSF leak.

How Common Are CSF Leaks—And How Do They Occur?

A spontaneous CSF leak is most common in people of childbearing age, Dr. Patel said, but it can happen to people of all sexes and at any age. Overweight individuals are also at increased risk since obesity is associated with idiopathic intracranial hypertension, which is increased blood pressure inside the skull that can create a CSF leak.

Research has suggested that spontaneous CSF leaks affect at least five out of every 100,000 people each year, and experts believe that many more people may go undiagnosed for long periods of time.

That number doesn't include CSF leaks that are caused by trauma. CSF leaks can occur after a head, brain, or spinal surgery; a spinal tap; or any type of injury to the head.

How Dangerous Are CSF Leaks?

CSF leaks aren't immediately life-threatening, but they can cause serious complications. "If you lose enough fluid fast enough, it causes pretty intense headaches," Dr. Patel explained. "But the bigger concern is that your body can't keep up with fluid production, and air enters the space around the brain where the fluid should be."

Air can also be forced into that space when a person blows their nose repeatedly, in an attempt to clear up their runny nose and "allergies," Dr. Patel said. "If there's too much air, it will push the brain around to create space, and that can become life-threatening," Dr. Patel added.

CSF leaks can also become dangerous if part of the brain starts to push through the hole in the bone. "Anytime there's communication between the brain and the outside world, there's a chance you could develop an infection," Dr. Patel explained, adding that about 15% of people with an active CSF leak develop meningitis, a potentially fatal inflammation of the brain.

How Are CSF Leaks Treated?

Some CSF leaks require a CT scan or a spinal tap for diagnosis, but if you're able to collect a sample of the liquid, healthcare providers can also test it for a specific protein that's only present in cerebrospinal fluid.

Once a CSF leak is diagnosed, it can usually be repaired with non-invasive surgery. "In most cases, when there is a nasal leak, we do the surgery entirely through the nose—just like we would do sinus surgery," Dr. Patel said.

If a leak was caused by trauma or surgery, patching the hole is usually sufficient, Dr. Patel added. But if it was a spontaneous leak, meaning it was caused by a buildup of pressure over time, it's important to address the underlying cause so another leak doesn't develop.

"That means there needs to be long-term management of whatever it was that caused that increased pressure," Dr. Patel explained. "That could mean weight loss, diet changes, or medications that can bring down the pressure." Some people need to have shunts implanted to regularly drain cerebrospinal fluid and keep their pressure controlled as well.

While your runny nose is most likely caused by a cold or flu, allergies, or simply being out in cold weather, one other possible cause is a CSF leak. Indications that your runny nose may be a CSF leak include symptoms that last longer than usual, non-stop running out of one nostril, severe headaches, and a metallic or salty taste. If you have any of these symptoms or are unsure, it's best to get checked out by a healthcare provider. 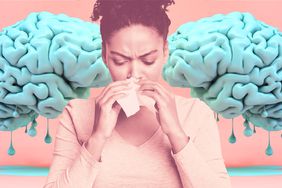