This Woman's Brain Tumor Symptoms Were Dismissed as Headaches

"The diagnosis was horrid to come to terms with, but I had finally been listened to—and that is what counted."

After 15 trips to the doctor for migraines, Beckie Hiley’s symptoms were still dismissed. The UK 19-year-old spent months dealing with crippling headaches that were completely hindering her from living a normal life—she couldn’t go to work or school, and she could barely keep food down. Despite her debilitating symptoms, doctors told her her pain was just a headache. It took an emergency trip to the hospital for her to finally get a diagnosis: brain cancer.

Hiley began experiencing her headaches in November 2017. At the time, she was on a medication for a separate medical condition and assumed that it was just a side effect of the treatment. But after finishing the medication in March 2018, her pain became worse. Hiley was settling into a new job, and as the months went on, the pain only became more intense.

“[The headaches] never ‘hit’ me or came out of nowhere like many people expect them to with brain tumors,” Hiley tells Health. “I woke up with a headache—which in itself is a symptom—and I went to sleep with a headache. The only time I wasn’t aware of them is when I was asleep, because I couldn’t feel them.”

Hiley says that doctors tried to explain it off as a "stress" or "tension" headache, but none of her pain patterns seemed to fit properly with what she was being told she had. “In all honesty, the pain was excruciating,” she says.

The pain began in her forehead, Hiley says, but overtime, it encapsulated her entire head. In the fall of 2018, her headaches started to be accompanied by intense vomiting, nausea, and fatigue.

“I was not even able to drink tap water. Everything had to be boiled or bottled for my stomach to keep it down,” she says. For nearly a month, she went through the same routine: One day, she would wake up with a terrible headache. The next day, she would throw up anything that she tried to eat or drink. She'd spend the next two or three days sick before she began to feel “normal” again for a few days—and then the pattern would restart.

During this time, Hiley began to develop even more terrifying symptoms, like a strange “whooshing” sound in her right ear, which she later found out was the result of pressure in her head. Despite all of these symptoms, her doctors still believed that her pain was just a byproduct of stress—but Hiley knew it was more than that.

“I have this intuition with my own body, as if my brain was trying to reach some separate part of me that would listen and understand the pain I was in as well as realize what was causing it,” she says.

6 Things Everyone Should Know About Brain Tumors

During the worst of her pain, she began to experience double vision. Luckily, this was the reason she sought out an optometrist—the same one who finally acknowledged that she was experiencing more than just a few tension headaches.

The optometrist noticed that her optic nerve (the nerve that transmits visual information to the brain) was swollen, which finally prompted doctors to give her a CT scan. The scan showed a lesion on her frontal lobe, and a biopsy revealed she had a type of cancerous tumor in her brain called a gemistocytic astrocytoma.

“Obviously, the diagnosis was horrid to come to terms with, but I had finally been listened to; and that is what counted,” Hiley says.

Hiley had her tumor removed, but in early 2019, scans showed that it had regrown. “Being diagnosed means you go through so many stages of grief, and being diagnosed with a tumor twice means I’ve felt everything twice too,” she says of the recurrence. She is currently undergoing chemotherapy and radiation, after her second brain surgery in February.

“To feel as if you aren’t being taken seriously or listened to is such a disheartening situation to be in,” Hiley says. “I had so many factors working against me that no one tried to see past it. I was a young girl, otherwise healthy, who had been taking a contraceptive pill known to give other users headaches, and the blame was placed on that even though my headaches began two years after I was even on that pill. I was generally healthy apart from my symptoms from the tumor, but to have no one use some common sense was horrific.”

Despite her adversity, Hiley is making lemonade out of lemons: She's using her story to bring awareness to organizations like The Brain Tumour Charity and HeadSmart to help others learn about the signs and symptoms of brain tumors in young people. 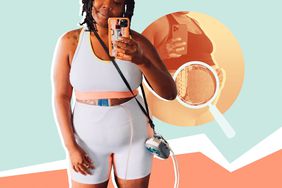