Similar symptoms, but knowing the difference can save your life.

Tammy Worth
Tammy Worth
Tammy Worth is a freelance healthcare reporter with over 20 years of experience. Her work appears across several publications including The Economist, Bloomberg, Health, Leader’s Edge, WebMD, and KCPT, Kansas City’s public television station.
health's editorial guidelines
Medically reviewed by
Jenny Sweigard, MD

Chest pain. It's a symptom that gets our attention. While it can turn out to be a heart attack, it can also be a sign of a less serious condition, such as heartburn. The problem is that it can be really tough to tell the difference. However, the symptoms do differ. The more you know, the easier it is to avoid heart damage if chest pain does turn out to be a heart attack or unnecessary panic if it doesn't.

Why Can Heartburn and a Heart Attack Feel Similar?

Gastroesophageal reflux disease (GERD) and other gastrointestinal problems such as ulcers, muscle spasms in the esophagus, a gallbladder attack, and pancreatitis can all cause chest pain and other symptoms that mimic those of a heart attack or angina—a crushing type of chest pain caused by decreased blood flow to the heart. Some people with angina say it feels like an elephant is sitting on their chest.

According to the American College of Gastroenterology, as many as 70 million patients (23% of the population) in the United States suffer from non-cardiac chest pain (NCCP). The most common cause of NCCP is GERD, which is caused by chronic acid reflux from the stomach into the esophagus.

The ambiguity in symptoms is caused by the fact that the nerves in the stomach and heart don't clearly signal to the brain where the pain originates.

Nerves in the chest are not as specific as nerves in, say, the hand, Stephen Kopecky, MD, a cardiologist at the Mayo Clinic in Rochester, Minn., told Health. Dr. Kopecky explained that if someone were to get hit with a hammer on their little finger, the person would be able to identify which finger was injured. But if someone were hurt in the heart, lungs, pancreas, esophagus, or stomach, in each case they may just feel the pain coming from the chest.

"This makes for a real problem when diagnosing," said Dr. Kopecky. "And about half of patients who have a heart attack have minor symptoms (or no symptoms) and do not seek medical attention."

Although every individual may experience varying symptoms depending on their stomach or heart condition, there are some ways to differentiate between the two.

How To Tell the Difference

If the problem is heart-related, you will likely feel a tightness, burning, or pressure in your chest. This pain is often worsened by exercise or severe emotional stress. It may spread to the back, neck, jaw, or arms, and is often associated with:

The culprit is also more likely to be heart-related if you have risk factors including diabetes, smoking, obesity, high cholesterol, or a family history of heart disease. Age plays a role as well: Heart disease is more common in men over 45 and in women over 55.

Time of Pain as a Factor

Duration is another factor, Myrna Alexander Nickens, MD, a cardiologist at Jackson Cardiology Associates in Jackson, Miss, told Health. Dr. Nickens said angina will usually last five to 10 minutes before subsiding. A heart attack will be slightly longer. And reflux can last for hours.

Pain After Eating Some Foods

If the problem is related to the digestive system, like GERD, it is often a sharper pain that may be precipitated by eating a fatty or spicy meal and is affected by a change in position. The pain will get worse when lying down or bending over. Stomach acid may come up into your esophagus and can leave a sour taste in your mouth.

But physicians caution that there are always exceptions. Julius M. Gardin, MD, chairman of the department of internal medicine at Hackensack University Medical Center in Hackensack, N.J., said some patients get angina after eating a big meal because blood flow is diverted from the heart for digestion. And, due to the placebo effect, people who are having a heart attack and mistakenly believe they are experiencing heartburn may actually feel better after taking an antacid, said Dr. Gardin.

Symptoms in Women and the Elderly

Women and elderly people are more likely than younger men to have unusual heart attack symptoms, said Dr. Alexander Nickens. Women may have nausea, exhaustion, and a generalized tired feeling when they're having a heart attack. Elderly people may feel faint, out of breath, or just generally bad.

If You're Worried, Get Checked Out

If you have symptoms that you are unsure about, see your healthcare provider. And go to the emergency room if you have chest tightness, break into a sweat, turn pale, become very weak, or faint.

If you have chest discomfort that's mild or passes when you're at rest, an emergency visit may not be necessary, but Dr. Alexander Nickens recommended seeing a doctor as soon as possible. A healthcare provider can use a blood test to see if you've had a mild heart attack or other heart problems.

Dr. Nickens also recommended annual checkups for anyone with heart disease risk factors even if they aren't having any chest pain or discomfort, and more frequent visits for those with specific risk factors such as diabetes and hypertension, which is particularly likely to increase the risk of a heart attack.

If you have chest pain that seems to be stomach-related, antacids should improve symptoms. And taking aspirin, which is a blood thinner, may bring relief for those suffering from heart problems and decrease the chance of having a heart attack or death, said Dr. Alexander Nickens.

If you experience severe chest pain and you aren't sure what's causing it, Dr. Gardin recommended chewing aspirin and seeking medical care. An important exception, he said, is people who have a known history of ulcers, since aspirin can make ulcers bleed.

Although aspirin can make gastrointestinal symptoms worse, it's the lesser of two evils. "There is a risk-benefit calculation that one would make," said Dr. Gardin. "The theory is that more people die of heart attacks than reflux."

If a heart attack is treated promptly—within 90 minutes of when symptoms start—the damage to the heart muscle may be minimized. "In terms of a heart attack, time is muscle," said Dr. Gardin.

Diarrhea After Working Out, Explained
Acid Reflux Signs and Symptoms 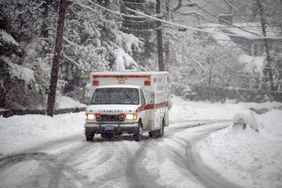