Her parents brushed it off as "a little bug" at first.

A 4-year-old Iowa girl has reportedly gone blind after nearly losing her life this flu season—and her parents are sharing her scary story to raise awareness of the importance of getting a yearly flu shot.

Jade DeLucia, hadn’t received the flu vaccine when she started feeling ill on December 19, her mother, Amanda Phillips, told CNN. Over the next few days, she was running a low-grade fever, which her mom treated with medicine, assuming it was just “a little bug” and that she would “get over it.”

"There wasn't any sign that would've told me that something was seriously wrong with her,” Phillips explained, adding that her daughter was still “running around, having fun, eating normally, asking for snacks."

However, things took a turn on Christmas Eve, when her father, Stephen DeLucia went to check on his daughter and found her unresponsive in her bed, running an extremely high fever. Jade's parents immediately took her to Covenant Medical Center in Waterloo, Iowa, where she almost immediately had a seizure.

Physicians at the hospital told them that Jade suffered "significant brain damage," and diagnosed her with acute necrotizing encephalopathy (ANE), an extremely rare condition caused by the flu that creates swelling in the brain, according to the Genetic and Rare Diseases Information Center (GARD).

What acute necrotizing encephalopathy—and how can it lead to blindness?

According to the GARD, ANE typically follows viral infections like fevers, respiratory infections, gastroenteritis, and influenza, and starts within 12 hours to three or four days after viral symptoms with "seizures, disturbances of consciousness that may rapidly progress to a coma, liver problems, and neurological deficits."

The majority of cases involve those under the age of six, per a reference in the medical journal Gene Reviews. However, older children, teenagers, and adults are also susceptible. An estimated one third of affected individuals die during the acute phase of the encephalopathy. Of those who survive, about one half will suffer permanent neurologic damage. Additionally, half will endure at least one repeat episode, with many having multiple repeat episodes

Jade is one of the lucky ones who survived. Doctors administered her steroids to reduce inflammation, and after days of unresponsiveness, she woke up on January 1. According to Phillips’ Facebook page the first words out of her mouth were “‘Hi mommy’ and ‘you guys I’m a mess,’”

"She is lucky to be alive," Theresa Czech, MD, Jade's neurologist at the University of Iowa, told CNN. "She's a little fighter. And I think she's super lucky."

Jade’s condition continued to improve, and she was even able to eat after a few days. However, Phillips soon realized that her daughter couldn’t see. After being examined by an opthalmologist, it was established that the problem wasn’t in her eyes, but her brain.

"It affected the part of her brain that perceives sight, and we don't know if she's going to get her vision back," explained Czech. "In about three to six months from now we'll know. Whatever recovery she has at six months, that's likely all she's going to get."

She added that Jade may also experience cognitive or developmental problems, such as learning disabilities, but more will be revealed in the upcoming months and years.

Jade spent almost two weeks at the hospital, and was finally discharged on January 8. The family started a GoFundMe to help with their medical expenses.

Now, their mission in sharing their story is to raise awareness about the flu shot and encourage others to get it. Phillips explained to CNN that the reason Jade hadn’t been vaccinated for the 2019-2020 flu season, is because she and her sister had gotten the flu shot in March 2019, and she was under the impression it lasted for an entire year. Additionally, she wasn’t aware that every flu season presents a different strain of the virus, making a yearly vaccine crucial.

"If I can stop one child from getting sick, that's what I want to do," Phillips told CNN. "It's terrible to see your child suffer like this."

While the flu vaccine is only about 40-60% effective at preventing the flu, according to the CDC, it can be incredibly powerful in reducing complications of it, reducing the chances of hospitalization and even death. One 2014 study in the Journal of Infectious Diseases found that children who had the vaccine were 74 percent less likely to be admitted to pediatric intensive care units for life-threatening complications of the flu.

This flu season has been particularly brutal. The most recent statistics released by the CDC report that as of January 4, 32 children had died as a result of the flu. Unlike other years where influenza A is dominant, for the first time in nearly three decades, influenza B—which can be more severe in children—is predominating.

Luckily, it isn’t too late to get your flu shot. "CDC recommends that everyone 6 months of age and older get a seasonal flu vaccine each year by the end of October,” they explain on their website. “However, as long as flu viruses are circulating, vaccination should continue throughout flu season, even in January or later." 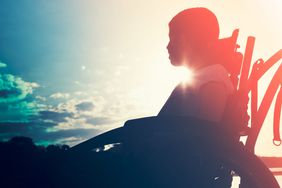