What to Know About Flu Tests—When You Need One, and What to Do if You Test Positive

Plus, why it's important to seek medical care as soon as you start experiencing symptoms.

In the fall and winter months, if you begin to feel run down and have a sore throat, runny nose, and a fever, you might naturally assume you have the flu. But, how do you tell for sure you have the flu and not another illness that has similar symptoms to the flu? Is there a definitive test you can take that will tell you if what you're feeling is the flu?

How Prevelant Is the Flu?

Between 2010 and 2020, the Centers for Disease Control and Prevention (CDC) said that the flu resulted in 9 million to 41 million flu illnesses each year—and even that is just an estimate.

The truth is, the CDC doesn't know exactly how many people get the flu annually, for a variety of reasons—mainly because many people don't seek medical care for flu symptoms, and even when they do seek treatment, doctors may not test for the flu because it doesn't change how a person is treated. That, and other factors (like people seeking care when their flu can no longer be detected through a flu test, and because flu is not a reportable disease) contribute to the fact that even the data we have may underrepresent the true burden of flu in the US on any given year, the CDC said.

A flu test is the only real way to know whether or not your or a loved one experiencing flu-like symptoms actually has the flu—and it can be a powerful tool, when reported, to help experts understand just how bad any given flu season is affecting the population. That's especially true with COVID-19 still circulating since symptoms of the two illnesses can be very similar.

But getting tested for the flu can be kind of intimidating—no one really wants to get a swab up their nose, after all. Here's what you need to know about flu tests, including who typically needs one, how long it takes to get results back, and what to do if you test positive for influenza.

How Do You Know if You Need a Flu Test?

Your need for a flu test will come down to the symptoms you present to your doctor, and how they decide to diagnose those symptoms. The most common signs and symptoms of the flu, per the CDC, usually include:

You may realize that the symptoms listed above are also very common to those seen with COVID-19—and if your doctor decides to test for that first, and it comes back negative, they will likely move on to a flu test, Robert L. Murphy, MD, a professor of infectious diseases at Northwestern Medicine Feinberg School of Medicine, told Health.

Are There Different Types of Flu Tests?

In a lab setting, there are a few different ways to test for influenza. The most common test for the flu is called a "rapid influenza diagnostic test" (RIDT). These RIDTs detect the part of the virus that stimulates an immune response, known as an antigen, the CDC says. Another type of flu test, called a "rapid molecular assay," detects the actual genetic material of the flu virus. Both of these tests are termed "rapid" because they can provide results in 10 to 15 minutes (RIDTs) or 15 to 20 minutes (rapid molecular assays).

Even more accurate than RIDTs and rapid molecular assays are the tests most often found in hospitals or public health laboratories (those places have more specialized labs than your average urgent care practice or healthcare provider's office). Those tests are known as reverse transcription polymerase chain reaction (RT-PCR) tests, viral cultures, or immunofluorescence assays, the CDC says. These results also take a little longer—up to several hours.

But as far as you're concerned, all of those tests require the same thing from you: a nasal swab, where a provider swipes the inside of your nose; or a throat swab, Cassandra Pierre, MD, MPH, an infectious disease physician at Boston Medical Center, told Health. Even more specifically, some tests go further back in the nose, while the rapid test only goes right inside, Anjali Mahoney, MD, MPH, a family medicine specialist with Keck Medicine of USC, told Health.

While no test is 100% accurate, Dr. Pierre said flu tests have a high degree of sensitivity and specificity, meaning they're likely to show a positive result if you're infected and a negative result if you're not infected. In some cases, Dr. Pierre said, providers will give a rapid test first in hopes of treating the flu as soon as possible, then send a molecular test to the lab to be totally sure of the diagnosis. Either way, your provider's goal is to help you feel better and prevent the spread in the community. "The reason flu tests are important is because there's treatment," said Dr. Murphy.

Also important: With COVID-19 still circulating, the CDC says there is a test that can check for both seasonal flu and COVID-19—these tests were sent to public health laboratories in August 2020, and the CDC continues to make and distribute the kits throughout the US. (Note: You can also have the flu and COVID-19 at the same time, making these dual tests even more important.)

So What Should You Do After a Positive Flu Test?

If your flu test is positive, your doctor will likely report the case to the state. "It's really important this year to get a sense of how many people are infected," said Dr. Pierre.

Your doctor will also decide whether or not you need treatment. The only treatment for influenza, Dr. Mahoney said, is the antiviral drug Tamiflu—also called oseltamivir—which can reduce the duration of symptoms and prevent serious side effects, but Dr. Mahoney said it's only effective within the first 48 to 72 hours of symptoms. So if you have flu symptoms, it's always a good idea to get tested by a medical provider as soon as you notice them, who can then decide if you need treatment.

While anyone can take Tamiflu, doctors often prescribe it for patients who are at higher risk of severe illness or hospitalization from influenza, such as kids under age two and adults over age 65. "We may even treat those patients if they don't test positive for flu," explained Dr. Mahoney.

In addition to any antiviral drugs you're given—or if you're given the OK to treat yourself at home with rest and fluids—you should still take precautions to make sure you don't make anyone else sick. The CDC recommends limiting your contact with others, washing your hands frequently, keeping commonly-touched surfaces clean, and covering your nose or mouth when you cough or sneeze. You should also do your best to stay home (except if you need medical care)—a good rule, per the CDC, is to wait at least 24 hours until your fever is gone to go out in public.

How Many People Die From the Flu Each Year?
Was this page helpful? 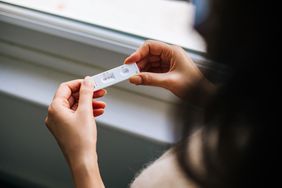 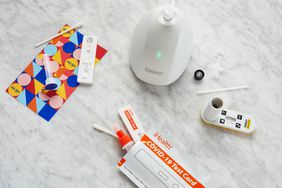