How To Get Rid Of a Stye—Stat!

Popping it is not the answer.

I got my first stye last year and promptly freaked out: Not only was this pimple-like lump on my lash line painful, but it was unattractive. What was this foreign bump on my eye, and did I need to see a doctor? I immediately texted a picture to my mother, who confirmed that it was probably just a stye. Somewhat relieved—but still grossed out by its puss-filled shape—I stood staring into the bathroom mirror, wondering if I should pop it. Then my mom's next text came through: "Don't squeeze it!"

Those of you who have fallen victim to these annoying little bumps, I feel your pain (literally). So, how long must we live with these stinging bumps, and are there any ways to help speed up the healing process?

A stye is typically a red, swollen, often painful bump that appears near the root of the eyelash or close to the edge of the eyelid, explains Samuel Pierce, O.D., president of the American Optometric Association (AOA).They're often caused by bacterial infections of the eyelid gland, he says, but adds that they can also develop from touching your eyes with unwashed hands, using expired cosmetics, sleeping with makeup on, and putting in or removing contact lenses without thoroughly disinfecting them with lens cleaner.

Styes can form on either the upper or lower lid and can last for a few days before they begin to disappear. They're often mistaken for a pimple, but my mom was right: the very last thing you want to do is pop them. Squeezing a stye may seem like you're doing your eye a favor by relieving it of the nasty gunk, but this can actually lead to infection, Dr. Pierce says. The best thing to do is to adopt a literal hands-off approach. Styes typically naturally drain and heal on their own. But if the bump on your eyelid appears worse or becomes more painful after 48 hours, it's best to consult your doctor.

Although it will usually disappear on its own, Dr. Pierce tells us that applying a warm compress can help speed up the process to naturally drain the stye. "Close your eyes and place a warm compress on the affected eye for 10-15 minutes up to four times a day," he says. Just make sure to wash your hands thoroughly first and be careful of the water temperature when dampening the washcloth—it shouldn't be so hot to burn or scald the delicate skin around your eye.

While the stye itself is not contagious, the bacteria that caused it is, says Debra Jaliman, MD, a New York City-based dermatologist. This means that it is possible to spread that bacteria to your other eye or to someone else if they come in contact with the same bacteria that caused the stye. Err on the side of caution and don't touch your eyes with dirty hands and refrain from sharing makeup with friends.

To prevent these little bumps in the future, remember to always wash hands with soap and water before touching your eyes, never share eye makeup or brushes, throw out expired cosmetics, and always remove eye makeup before going to bed (yes, even if you're exhausted).Finally, while it may be tempting to conceal a red or inflamed eye bump with makeup, experts strongly discourage it. The reason: a stye may come and go in few days, but it can actually take seven to 10 days for your eye to heal, so you should refrain from using makeup (mascara included) during that time. "You should also not use anything to cover it unless the 'boil' has drained and you're using a sterile bandage or gauze to prevent further infection while it finishes healing," Dr. Jaliman says.

8 Reasons Your Eyes Are Red—and How to Treat Them 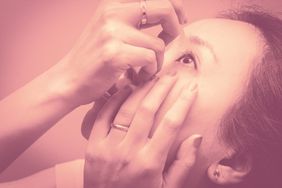 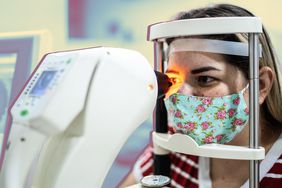 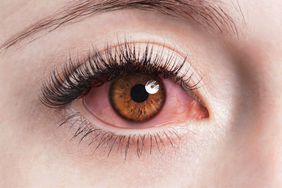 How Do You Get Pink Eye?

What to Do if You Get a Pimple Near Your Vagina