These abdomen pictures are helping raise some much-needed awareness about this condition.

March is Endometriosis Awareness Month, and if you're scratching your head not entirely sure what that means, you wouldn't be the only one. But because this painful condition deserves long overdue recognition, some women who have it are taking to Instagram to share photos of their endometriosis (endo) scars using the hashtag #ThisIsEndometriosis.

Endo is a disorder in which endometrial tissue grows outside the uterus, typically attaching to other pelvic organs. It can cause symptoms like killer menstrual cramps, pain during sex, uncomfortable bloating, and pelvic pain even when you don't have your period. But because a lot of doctors don't know much about it, these symptoms are played down or blown off as a normal part of having a monthly cycle, or they're dismissed as psychological.

"This photo shows the scars from my excision surgeries with the years in which they occurred," Hillary Wright wrote on Instagram "In these surgeries, I've had endometrial tissue removed, cysts removed, scar tissue that covered and bound my organs together removed, and more." Photographer Georgie Wileman started the #ThisIsEndometriosis campaign, Wright explained.

What to Do if You Think You Have Endometriosis

Wright went on to sum up the so-called treatments doctors suggested she try over the years: "Endometriosis is so misunderstood that treatments for pain that have been recommended to me have been: wait it out, mountains of pain pills (read: opioid epidemic), birth control, surgery, hysterectomy, and my all time favorite 'you could try to have a kid and see if it will get better.' (Having a child is not and should never be suggested as a treatment to pain.)"

Wright isn't the only woman who shared her story. Casey Berna posted a photo of her incision scars with this caption: "What if my gynecologist had referred me to an #endometriosis specialist as a teenager when I had clear #endometriosis symptoms? What if the general surgeon who took out my appendix at 23 could have recognized the disease that was clearly covering my entire pelvis, impacting multiple vital organs? What if my reproductive endocrinologist sent me to an #endometriosis specialist instead of just ablating my disease? How much less suffering? How many less surgeries? How much more health, joy, opportunities would have come my way?"

Another woman who took part in the campaign, Helen Wilson-Beevers, shared that it took nine years for her to be diagnosed. "I've had 11 endo-related operations, countless procedures, and have spent 21 years in pain...The impact endometriosis has on every single part of life is catastrophic. Relationships suffer, people ask why you aren't better yet, and pain sucks away each ounce of energy you have left," she continued. "I was managed out of most jobs I did because of multiple sick days and lack of understanding."

Endometriosis is a very real and serious condition, and hopefully, this campaign will result in more women being correctly diagnosed. If you think you might have endo, these steps will help you make your voice heard in your doctor's office.

Women Are Sharing Photos of Their Bloated Bellies to Reveal a Little-Known Symptom of Endometriosis
Was this page helpful?

Study: Women With Endometriosis May Have Higher Risk of Stroke
Adenomyosis vs. Endometriosis: What's the Difference? 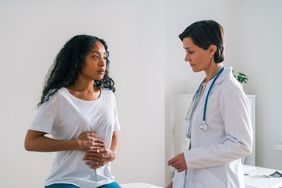