Endometriosis is a disease that mainly affects females and can cause several painful symptoms. The symptoms include painful and heavy periods and pain when moving the bowels and peeing. It is most often seen around the ovaries and pelvic area, but can, at times, appear in other areas like the bowels.

Heather Guidone was in her early teens when her symptoms first started. She felt sick to her stomach all the time. Excruciating cramps left her bent over with pain, even when she wasn't on her period. She was frequently nauseous, bloated, and had urgent diarrhea. Sometimes, the pain was so severe that she couldn't get out of bed. "It literally, with no exaggeration, ruled my life," Guideone told Health. Although she wouldn't know it for several years, Guidone had bowel endometriosis.

Endometriosis, in general, is a relatively common condition. It affects 10–12% of people born with a uterus once they reach reproductive age, according to a 2020 paper published in the International Journal of Women's Health. Bowel endometriosis—a manifestation of endometriosis that occurs on or around the bowels, is less common, affecting anywhere between 5–12% of people who have endometriosis.

To understand how bowel endometriosis happens, you first have to understand how organs fit together in a human pelvis, Murray Orbuch, MD, assistant professor of gastroenterology at Mount Sinai in New York, told Health. All of the organs in the pelvic cavity—the bladder, the colon, the rectum, and reproductive organs like the uterus, fallopian tubes, and ovaries—are very tightly packed in.

When someone has endometriosis, tissue very similar to the tissue that normally lines the inside of their uterus grows outside the uterus. Most of the time, that endometrial-like tissue grows around the ovaries, the fallopian tubes, and the tissue that lines the pelvis. And it acts just like endometrial tissue is supposed to—it swells, breaks down, and bleeds roughly every 28 days. But because the tissue has nowhere to go, it gets trapped inside the body and causes scar tissue and adhesions.

When the tissue grows on the bowel, the adhesions act a bit like glue and "can tether bits of the intestine to itself or other organs and cause a mess," Dr. Orbuch said.

These symptoms can sound a lot like gastrointestinal disorders like irritable bowel syndrome (IBS), inflammatory bowel disease (IBD), or even appendicitis, which is one reason bowel endometriosis often takes a long time to diagnose. "But when we see them accompanied by pelvic pain, painful periods, backache, infertility, painful intercourse, ovulation pain, or leg pain, it's much more likely that the symptoms are the result of endometriosis and not a GI disorder," Dr. Sinervo said.

Bowel endometriosis is "tricky to diagnose and tricky to treat," Dr. Orbuch said. Guidone considered herself "lucky" that it took only a few years and a few healthcare providers to get an endometriosis diagnosis in the 1980s. She was living with near-constant pain for all of her teenage years and had no reason why, but she was still one of the lucky ones.

Even in 2021, many people with bowel endometriosis waited an average of seven to eight years and go from healthcare provider to healthcare provider, sometimes seeing four to five gynecologists before getting a diagnosis, Dr. Orbuch said.

The struggle to get a diagnosis was, again, partially because symptoms can look like several GI conditions, but also because the medical community was still learning about endometriosis as a disease. Although knowledge was creeping up, Dr. Orbuch said it needed to "creep faster" since living with bowel endometriosis "can wreck someone's life."

"There needs to be better recognition among gynecologists, gastroenterologists, and even pediatricians," Dr. Orbuch said. "You can't call it IBS and forget it." Red flags should go up if the bowel symptoms seem to get worse on a cyclical pattern corresponding to the patient's period or if the patient is struggling to get pregnant. "I've had more than a few women in their 30s come in with GI symptoms and also infertility, and no one ever recognized that they had endometriosis," Dr. Orbuch said.

Once those red flags go off and endometriosis is added to the list of possibilities, healthcare providers might try to get a peek inside your body with imaging technology such as an MRI or transvaginal sonography — a procedure during which an ultrasound probe is placed inside the vagina to take images of reproductive organs from within.

However, your healthcare provider might skip the imaging and suggest exploratory surgery instead. Laparoscopic surgery with a biopsy for confirmation is considered the "gold standard" in diagnosing endometriosis, Dr. Sinervo said. It's a faster, more accurate diagnosis and tells the healthcare provider exactly how much scar tissue and endometrial-like tissue they're dealing with.

Guidone was diagnosed with "old school" laparotomy surgery in the 1980s, but the procedure has become less invasive. During a laparoscopy, "the surgeon will create small incisions around the belly button and put a camera in to visualize the abdominal cavity," Dr. Orbuch said.

Much of the time, especially for people whose endometriosis greatly impacts their lives, healthcare providers will suggest surgery. A laparoscopic surgery, similar to the one used to diagnose endometriosis, is used to cut out the invasive tissue and the scar tissue it creates. "The serosal, or outer layer of the bowel, can often be 'peeled off' leaving the muscularis, or muscular portion, of the bowel undamaged," Dr. Sinervo said.

While words like "peeled off" may sound scary, the surgery can virtually erase endometriosis symptoms or make them much easier to manage. "My excision surgery changed my life," Guidone said. "I'm not in perfect health and will never be; but I'm free of endometriosis symptoms and the remaining issues I have are wholly manageable."

Guidone became the surgical program director at Dr. Sinervo's office to help others recognize and get treatment for their endometriosis, and she was particularly qualified to spread the word about bowel endometriosis. Guidone said, "No one should be missing work, afraid to leave their home, not being able to be out with their family or friends, have their careers or school goals derailed, have to validate their pain and symptoms to others who don't understand or appreciate them, and feel utterly hopeless because of a disease that is actually treatable."

Thanks for your feedback!
Tell us why!
Related Articles
Adenomyosis vs. Endometriosis: What's the Difference? 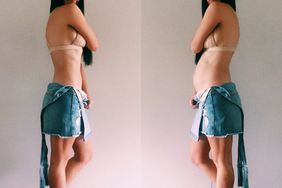 What Is Endometriosis Endo Belly?