What Is Splinting—And Can It Actually Help With Constipation?

"When in doubt, thumb it out."

Who here scrolls through TikTok while sitting on the toilet? Well talk about good timing if you happened to come across this now-viral video as you were sitting there waiting for something to come out.

Last week, a TikTok user Ambria Alice Walter-Field (@ambriaalicewalterfield) posted a video asking people to share a reason why they are happy to have a vagina. She went first, saying that, "You know when you're struggling to go for a 'P-O-O' and you just"—she then makes a hook motion with her thumb—"and then it's fine."

Some commenters said they do that too. But others had questions about what she was talking about and needed answers. And so, the next day, she posted a second video to give more details. Complete with a *pop* sound effect, she explained, "When you're constipated, and your poop is there but you can't quite push it out—it's like turtling—just put your thumb in your vagina. You can feel the poop and you can just pop it out."

"Can't wait for the next time I'm constipated so I can try this," one user commented. "When in doubt, thumb it out," someone else wrote.

The video has been viewed more than 2.7 million times, including by someone who said they are a labor delivery nurse: "I do this for my patient when the hubby isn't looking so that it doesn't happen when he is looking," the user commented.

Turns out, there's an official medical name for this trick: splinting. Here's what to know about it—and whether it's a good idea for you to try it, if you're feeling backed up.

According to Eman A. Elkadry, MD, who specializes in urogynecology at Mount Auburn Hospital in Massachusetts and teaches at Harvard Medical School, "splinting involves supporting the perineum—the area externally between the rectum and vagina—or the back wall of the vagina to assist in having a bowel movement."

Essentially, splinting redirects the bowl movement so that you can more easily pass stool. (Dr. Elkadry says that splinting can also be used in instances of prolapse that interferes with peeing. But that's a lot less common, so we'll stick to bowel movements here.)

Should you try splinting?

"If you have fairly normal bowel movements or occasional constipation, there is no need to splint," Dr. Elkadry tells Health.

Before you have a go at splinting, first try adjusting your diet and pooping position. A high-fiber diet (at least 30 grams of fiber a day, according to Dr. Elkadry) can make your stool a consistency that's easier to pass. Add the fiber gradually, though, to avoid bloating or feeling gassy or crampy. As for your position on the toilet, sitting with your legs elevated, like on a Squatty Potty can also make the bowel movement easier. (After all, squatting is how humans used to go to the bathroom)

But if those first steps don't work, splinting might be a thing to try. "It is worse to consistently strain to evacuate," Dr. Elkadry tells Health. And that's especially true for women with prolapse. For these women, splinting is preferred over prolonged pushing because chronic prolonged straining can actually worsen prolapse and stretch tissue even further.

And splinting is pretty effective. In 2012, Dr. Elkadry and some of her colleagues did a small study published in the journal Female Pelvic Medicine and Reconstructive Surgery which found that splinting helped all but one of the 29 women who were in the study. Still, having to splint can be uncomfortable (the poster of the original TikTok that started this whole thing also made a video that includes guidance on how to splint) and hard to do in public or anywhere outside your home.

"If the problem is severe or bothersome, then seek the advice of a specialist, as there are both noninvasive as well as surgical solutions to aid pelvic support," Dr. Elkadry says. "There are also pelvic floor physical therapists that can help improve pelvic muscle function during evacuation." 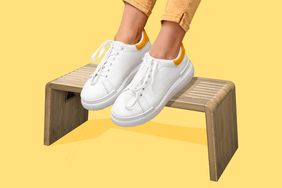 How Pelvic Floor Physical Therapy Can Help You Poop