What many people think of as the "stomach flu" is usually not the flu at all. Symptoms like nausea, vomiting, and diarrhea are more likely the result of a gastrointestinal virus. True influenza only affects your airways.

"The 'stomach flu' is a viral illness that affects the gastrointestinal tract, more accurately referred to as 'viral gastroenteritis,'" says Elena Ivanina, DO, MPH, a gastroenterologist atLenox Hill Hospital in New York City. "It is not the same as the 'flu' that we all get vaccinated for each year, which is the influenza virus and only affects the nose, throat, and lungs."

Instead, these gastrointestinal bugs are usually caused by other viruses, namely norovirus (known for ruining cruises), as well as rotavirus, adenovirus, and astrovirus. You catch them from someone else who is sick, say by touching something they touched and then touching your mouth or nose. Sharing utensils is one classic example.

Stomach viruses can also be spread through contaminated water or food–in which case the results would usually be called food poisoning. (Similar symptoms can also be caused by bacteria or parasites, but it's much less common.)

Symptoms of the stomach flu usually show up one to three days after you're infected. Some cases are mild, lasting 24 or 48 hours, although some can linger for up to 10 days.

Watery diarrhea is one of the first signs of a gastrointestinal virus. This is because the infection prevents your large intestine from retaining fluid. Instead, it leaves your body in the form of loose, watery stools. "It's typically three or more times a day and sometimes a large volume," says Sean Drake, MD, a general internist with Henry Ford Health System in Sterling Heights, Michigan.

The watery stool usually doesn't smell and isn't bloody, says Roopa Vemulapalli, MD, associate professor of internal medicine and a digestive diseases expert at UT Southwestern in Dallas. "If you see blood, that's definitely much more of a problem," she says. Blood in your stool is a sign you should head to the emergency room.

Nausea and vomiting also occur with gastrointestinal viruses about 70 to 80% of the time, although it's possible "just one end or the other" will be affected, Dr. Drake says. And while certainly unpleasant, these symptoms are actually a good sign: Your body is trying to get rid of the bad stuff.

Abdominal cramps or abdominal pain are also common as "the gastrointestinal system tries to push the toxins out," says Dr. Vemulapalli.

Dehydration is a symptom that needs to be addressed since it can cause your condition to get even worse. If you're dehydrated, you may feel very thirsty, have a dry mouth, and urinate infrequently. When you do go, you may notice dark, yellow urine. Dehydration may even make your skin bounce back more slowly when you press it. You may also feel dizzy, lightheaded, or confused.

Weakness will also likely occur as your body furiously flushes fluids and more out of your system.

Lower-grade fever is also common. This is usually nothing to worry about, but a higher one might be. A temperature above 102°F may be a sign that dehydration is becoming severe, Dr. Drake says. A high fever is also more common with actual influenza.

People with weakened immune systems or who were taking antibiotics before getting ill may have worse stomach flu symptoms, Dr. Vemulapalli adds.

Is It Food Poisoning–or the Stomach Flu? Here's How to Tell

Resting and staying hydrated are important while you let a gastrointestinal virus run its course.

Be sure to take in plenty of extra fluids. "It's very important to maintain fluid status and replace fluids," Dr. Vemulapalli says. "Patients do feel better [when hydrated]." Stick to water and clear liquids like chicken broth and juice.

Over-the-counter remedies are usually not necessary. "Most patients shouldn't take anti-motility drugs [like Imodium]," says Dr. Drake, since stomach bugs typically get better on their own.

Viral infections usually come and go quickly. Norovirus generally lasts about two days while rotavirus symptoms can linger for up to eight, says Dr. Vemulapalli. If your symptoms are severe or prolonged, then it's time for meds, Dr. Drake says. (Antibiotics may help if you actually have a bacterial stomach infection.)

When to Seek More Help

Though gastrointestinal viruses usually resolve with good self-care, there are some signs that you need urgent medical care. Go to the emergency room if you have any of these symptoms:

That's especially true if you're in a high-risk group. "We're a little more concerned with older patients because they're more prone to getting dehydrated quickly," Dr. Drake says.

Kids can get vaccinated against rotavirus, but as an adult, your best bet for avoiding stomach viruses is the tried-and-true.

Wash your hands with soap and water or alcohol-based sanitizers. Disinfect any surfaces that might be contaminated. Avoid people who are sick as much as possible. 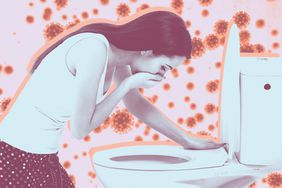 Is Vomiting a Symptom of COVID-19? Here's What Doctors Say 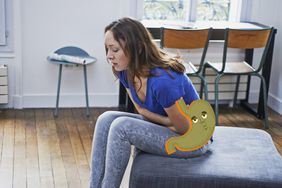 6 Ways to Get Over the Stomach Flu Faster, According to Doctors