Some, like nausea and diarrhea, are common, while others are rare but dangerous. Here's what to watch out for.

Antibiotics are some of the most commonly prescribed drugs in the United States. These medications are used to treat bacterial infections, which—unlike viruses—usually don't go away on their own. And while studies show that antibiotics are overprescribed and often given to patients who don't actually need them, doctors also agree that the drugs, when used correctly, are an extremely important (and often lifesaving) part of modern medicine.

Like all drugs, antibiotics can have side effects. Most aren't life-threatening, and patients can often ask their doctor for help in preventing or managing unpleasant complications like diarrhea or secondary infections.

But some side effects can be serious—and some can be just plain weird. (Take, for example, the recent case of a woman who developed a condition called black hairy tongue after taking the drugs meropenem and minocycline.) Here are some antibiotic side effects you should know about and watch out for if you're prescribed one of these drugs.

One of most common complaints from patients taking antibiotics is gastrointestinal issues like nausea, vomiting, and diarrhea, says Kate Dzintars, PharmD, a clinical pharmacy specialist at Johns Hopkins Medicine. "There is a condition called antibiotic-associated diarrhea, and we council patients to be on the lookout for that," she says. Drinking plenty of fluids and avoiding high-fiber foods may help patients cope until they've finished their course of medication.

If diarrhea becomes severe, it could be a more serious condition called clostridium difficile-associated diarrhea. "This happens when the antibiotic has killed the good bacteria in the gut and the bad bacteria has overgrown," says Dzintars. This condition can cause dehydration and may require hospitalization, so call your doctor if you're experiencing watery diarrhea several times a day.

Antibiotics can also cause an overgrowth of bacteria in the small intestine, which can contribute to bloating and cramping that continues even after you've stopped taking them. This type of infection usually requires more (but different) antibiotics to bring the gut's bacterial balance back to normal.

Headaches are another common complaint from people taking antibiotics. "If you have a headache and you don't think it's from sleep deprivation or caffeine deprivation, it certainly could be the antibiotic you're taking," says Dzintars.

"Usually these headaches aren't severe, and they're only temporary," she adds. "And as long as it's not causing excruciating pain, an over-the-counter analgesic can usually help."

Certain antibiotics are photosensitizers, which means they affect how the skin reacts to ultraviolet light. Exposure to sunlight while on these drugs can increase the risk of sunburn, blistering, peeling, and subsequent damage to skin cells. Some of these drugs can also interact with sunlight to cause a red, itchy rash—even in just as little as 15 minutes of exposure, according to Scientific American.

That's why people taking drugs such as tetracyclines, fluoroquinolones, and sulfa drugs should avoid prolonged periods of sun exposure, especially between the hours of 10 a.m. and 2 p.m., and should wear broad-spectrum sunscreen and protective clothing if they do spend time outside. Some common examples of those drugs include doxycycline, Cipro, and Bactrim.

Taking antibiotics may treat your bacterial infection, but it could also cause other medications you're currently on to work differently—or not as well. Drugs that can interact with antibiotics include blood thinners, antacids, antihistamines, anti-inflammatory drugs (like over-the-counter pain medicines), psoriasis medications, diuretics, antifungal drugs, steroids, diabetes medications, muscle relaxants, migraine medications, and some antidepressants.

Hormonal birth control can also be less effective when taken with the antibiotic rifampin—but fortunately, that drug is rarely prescribed; most common antibiotics haven't been shown to affect contraceptive failure rates. Keep in mind, however, that if an antibiotic causes vomiting, there's a chance your body may not absorb your daily birth control pill as it should.

Antibiotics can also interact with alcohol. Specifically, the drugs metronidazole, tinidazole, and trimethoprim sulfamethoxazole "should never be mixed with any amount of alcohol, because the combo can cause an unpleasant reaction which may include headache, flushing, a rapid heartbeat, nausea, and vomiting," according to Health's medical editor Roshini Rajapaksa, MD.

Having one or two drinks while on other types of antibiotics isn't as big a deal, says Dr. Raj, although some people find that the drugs' common side effects (like upset stomach or dizziness) are enhanced by alcohol. If you're sick and already taking antibiotics, remember that it's not just booze you should watch out for: Some cold medicines contain alcohol, as well.

Because antibiotics alter the bacterial makeup in our bodies, they can leave us vulnerable to yeast infections and other types of fungal growth, says Dzintars. These infections can happen in the mouth (known as oral thrush), on the skin, or under fingernails or toenails, to name a few common spots.

Antibiotics—especially if they're taken long-term—can also upset the bacterial balance found in a woman's vagina. This can change her pH and can contribute to yeast infections down there, as well. Taking an anti-yeast medication (like Monistat) while you're on antibiotics may help prevent this side effect, but check with your doctor before you add another drug to your regimen.

That recent case of black hairy tongue may also be related to fungus. Antibiotics—particularly tetracyclines—can cause the tiny bumps on the tongue's surface (called papillae) to grow longer and trap more bacteria, tobacco, food, and, yes, yeast, which can all cause discoloration and a furry appearance. Fortunately, when antibiotics are to blame, the condition usually goes away soon after the drugs are stopped.

"People may break out into rashes or hives, have swelling in their lips, or become short of breath," says Dzintars. They can even have a full-on anaphylactic reaction, in which their throat swells shut and they need a dose of epinephrine right away to save their life.

These reactions aren't common, but they're definitely something to watch out for if you're prescribed a new drug you haven't used before. Being allergic to one type of antibiotic doesn't preclude you from using other types, says Dzintars, but it does mean you'll have to be careful not to use anything else in the same family.

12 Signs You Are Having an Allergic Reaction

Some research suggests that tetracycline antibiotics can cause permanent staining or discoloration of children's permanent teeth. As a result, since 1970, all drugs in this class have been prescribed with a warning label that advises against their use in children under 8. (Taking these drugs during pregnancy has also been linked to stained teeth in a woman's offspring.)

But the Centers for Disease Control and Prevention (CDC) points out that doxycycline, a newer tetracycline-class antibiotic, "binds less readily to calcium and has not been shown to cause the same tooth staining."

That's important, since doxycycline is the best treatment for Rocky Mountain Spotted Fever, a potentially deadly tickborne disease. Misperceptions about this drug—and doctors' fears of staining their patients teeth—may prevent kids from getting lifesaving treatment, the CDC says.

Drugs known as fluoroquinolones (including Cipro and Levaquin) used to be a popular choice for treating common conditions like pneumonia, bronchitis, and urinary tract infections. But in recent years, doctors have realized that these drugs tend to cause more—and more serious—side effects than other classes of antibiotics.

Some of those side effects involve damage to the tendons that connect muscle to bone, including reports of pain (tendonitis), injury (tendinopathy), or even rupturing. The FDA has added warnings to these drugs' packaging about the risk of tendonitis as well as permanent nerve damage. In 2016, the agency advised that fluoroquinolones should only be used as a last resort drug.

Because this type of antibiotic has also been linked to tendonitis, the authors theorized that pain and stiffness in the muscles around the eye may be to blame for this additional side effect, as well. They also say that thorough vision and neurological exams should be done for patients exhibiting this symptom, in order to rule out other causes.

Antibiotics change the makeup of the body's microbiome, the researchers suggest, which may affect neurologic pathways, metabolism, and immunity—all of which could have effects on a person's mental health.

These are just some of the reasons antibiotics should only be taken as needed, and only as directed by a doctor, says Dzintars. (The growing threat of antibiotic-resistant bacteria—which is fueled in part by overprescription of the drugs—is yet another.)

"A lot of people assume that antibiotics are safe and that they're going to be a magic bullet for whatever's wrong," says Dzintars. "And yes, they are our best defense against bacteria that have been here a lot longer than we have—but we need to treat with the right drug, with the right dose, for the right duration, and we need to be aware of their risks, as well." 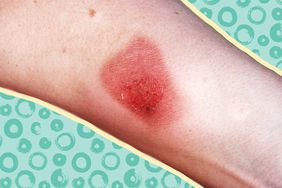 5 Common Causes of Kidney Disease, According to Nephrologists