What To Know About Runner's Trots

The condition could happen at any time during intense exercise.

If you're a runner, you've probably been there: You're enjoying your run, and just as you should be upping your intensity or hitting a new PR, your GI tract starts rumbling and contracting. If you don't hightail it to a restroom quickly, your bowels will start moving too. Turns out, there's a name for this phenomenon: runner's trots.

Completing a run without stopping for an urgent bathroom break is ideal. To reclaim your run, learn why runner's trots happen—and how to make them stop.

What Are Runner's Trots?

Runner's trots can also affect cyclists and swimmers, per a March 2019 article published in International Journal of Sport Nutrition and Exercise Metabolism. However, while annoying and potentially embarrassing, runner's trots are usually nothing to worry about. "They're a physiological phenomenon, not a disease," Waqas Nawaz, MBBS, a gastroenterologist at the Ohio State Wexner Medical Center, told Health.

What's Happening in Your Body When You Get Runner's Trots?

As you start running, several different changes happen in your system. When your feet hit the pavement, vibrations roll through your body and jostle your intestines up and down. "This likely contributes to a more rapid passage of fecal contents through them, resulting in that OMG feeling that you've gotta go," Dr. Ligresti said.

As you increase your intensity, your GI functioning might shift due to changes in hormone levels and how your gut and brain communicate, Dr. Nawaz said. And on the cusp of peak oxygen demand, your body redirects 80% of blood flow from your gut to higher-need areas like your muscles, heart, lungs, and brain. Some of this blood redirection may lead to gastric barrier disruption and diarrhea, according to a BMJ Open Sport & Exercise Medicine article published in February 2021. This diversion deprives the cells lining your intestines of oxygen and fuel, resulting in GI-related symptoms.

What Should You Do When You Get Runner's Trots?

In the moment, the best (and most obvious) remedy for runner's trots is to head for the nearest restroom. Slowing to a walk might help dial down that gotta-go-now sensation, so try that—even though the urge will likely come right back when you pick up your pace again.

One thing you shouldn't do is take anti-diarrhea medications like bismuth subsalicylate (Pepto Bismol) or loperamide (Diamode). These medications could actually cause more damage since they decrease the flow of fluids to your already-deprived intestines, Dr. Nawaz said, and reduced blood flow can worsen symptoms.

How To Prevent Runner's Trots

Since you can't do much to stop the trots, the key is to prevent them from striking in the first place. A few simple changes to your pre-workout routine can help that happen.

Limiting or cutting out foods that may cause digestive issues—like dairy products, high-fiber foods, high-fat foods, and sugar replacements like sorbitol or isomalt—can help you steer clear of runner's trots. In fact, it's a good idea to not eat anything two hours before lacing up your running shoes, Dr. Ligresti suggested, so you're running on an emptier stomach.

You'd think too much water would lead to diarrhea, but the opposite is true. Dehydration is known to cause the runs because lower blood plasma volume can, in turn, decrease blood flow to the intestines. Dr. Ligresti's advice: "Stay hydrated by drinking at least 16 ounces of water approximately 90 minutes before your run and 8 ounces of water every 20 minutes during the run."

Although caffeine is commonly found in pre-workout supplements, it's also a laxative: The National Institute of Diabetes and Digestive and Kidney Diseases (NIDDK) noted that drinks and foods that contain caffeine could make diarrhea (as well as several other digestion-related conditions) worse. Therefore, it's a good idea to limit your intake of coffee, tea, or any other caffeinated drinks to three to six hours before you hit the pavement.

Save Pain Relievers for Post-Run Recovery

Stick With Your Usual Diet

"Most importantly, don't try out new foods before a run," Dr. Ligresti said. You never know what might turn your stomach, especially if you're traveling and eating foods you're not familiar with. If you're hungry before a run, fuel up with low-fiber, easy-to-digest carbs like a bagel, English muffin, pasta, or rice, Dr. Ligresti suggested.

When Should You See a Healthcare Provider About Runner's Trots?

If your trots involve explosive diarrhea, last longer than 24 hours, are a regular occurrence every time you run, or come with other concerning symptoms (like blood in your stool, nausea, or ongoing abdominal pain), schedule an appointment with a healthcare provider.

Digestive distress can have many causes, both physical and mental, so don't panic if your runner's trots seem like something more. At the same time, "these red flags may be a sign of something more serious and require further examination," Dr. Ligresti said. "Do not take them lightly." 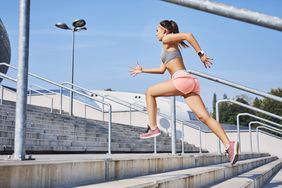 What Exactly Are Digestive Enzymes—And Do You Need One?
7 Reasons Your Poop Looks Green 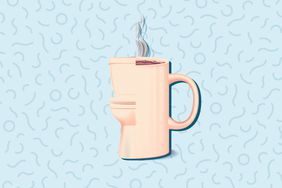