He hadn't gone #2 for an entire week.

Constipation isn't, um, pleasant for anyone, but for one man, it almost became life-threatening. The 80-year-old, who lives in Taiwan, was found collapsed in his living room. When he got to the hospital, he told doctors he hadn't been able to poop for a week. It turned out he was so constipated, his bowels almost exploded.

Doctors discovered that nearly a foot of hardened poop had clogged up his intestines, according to the Daily Mail. The build-up slowed blood flow to his intestines, and his intestinal tissue began dying off. Surgeons reportedly had to cut out a foot-long section of his bowel to get things moving again.

The man was diagnosed with ulcerative colitis, a chronic, inflammatory bowel disease. He reportedly stayed in the hospital for two weeks before he was able to go home.

This isn't the first case of constipation turning potentially deadly. Just last year, a report surfaced of a man in the U.K. who was so constipated he suffered from rare conditions called megacolon and megarectum, or severe dilation of the colon. The backup caused his colon to tear open, his kidneys started to fail, and there was increased acid in his blood. Luckily, surgeons were able to relieve the man of the fecal clog.

It's not clear how the Taiwanese man's constipation got so out of control, but sometimes, a person can develop something called fecal impaction. That's when a large, hard mass of feces becomes so stuck, the person can't push it out no matter how hard they strain over the toilet bowl.

General constipation is a common problem, and luckily some simple steps can help prevent it. One is to make sure you're getting enough fiber in your diet, Pat Raymond, MD, a fellow of the American College of Gastroenterology, previously told Health. That means eating more fruits, vegetables, and whole grains.

Staying hydrated is another way to keep things running smoothly. Constipation occurs when stools are too hard and dry to pass easily, Dr. Raymond said, so make sure you're hitting the H2O until your urine is a light, lemonade-like hue. If it's more of a dark yellow, you need to drink more.

Regular exercise is also a powerful anti-constipation tactic. Anything that causes an increase in heart rate and breathing can stimulate muscle contractions throughout the body and speed up a slow colon, Dr. Raymond said. (That's why a sedentary lifestyle is a common cause of constipation.) The exercise doesn't need to be anything super intense; even just a walk can help things along.

Why Does Poop Smell? Doctors Weigh In
Was this page helpful?
Thanks for your feedback!
Tell us why!
Related Articles

5 Ways to Make Every Poop a Great One 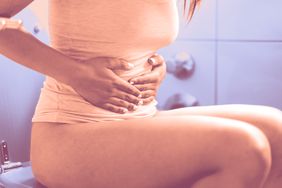