Could that persistent cough and drippy nose be from laryngopharyngeal reflux (LPR)?

If you wake up some mornings with an annoying post-nasal drip and a scratchy cough that lingers all day, you're probably blaming allergies or maybe a cold.

But when your symptoms persist and don't respond to antihistamines or cold medicines, consider this: You might be battling a type of acid reflux known as silent reflux—a lesser-known but plausible condition. And it has nothing to do with colds or allergies at any time of the year.

What Is Silent Reflux?

Acid reflux generally implies indigestion, say from eating spicy or acidic foods, or gastroesophageal reflux disease (GERD), a closely related yet chronic disorder with several causes. On the contrary, silent reflux—officially known as laryngopharyngeal reflux (LPR)—isn't characterized by the same symptoms of burning or stomach distress. Instead of the typical signs, silent reflux has its own symptoms.

Like regular acid reflux, silent reflux still occurs when stomach acid inadvertently flows up to the esophagus. This irritates your throat, causing a cough and post-nasal drip as well as hoarseness in the morning.

It can also lead to a chronic need to clear your throat and the sensation that there's a lump in your throat—because as stomach acid irritates the esophagus, mucous membranes in the throat will produce more mucous than usual, explained Jamie Koufman, MD, director of the Voice Institute of New York and author of Dropping Acid: The Reflux Diet Cookbook & Cure.

Left untreated, silent reflux can cause serious problems over time, including asthma, sleep apnea, and even cancer of the esophagus. Unlike seasonal allergies, though, it won't trigger a runny nose, sneezing, or itchy eyes. Plus, any mucous you're coughing up will look different. "With someone with seasonal allergies, their discharge is crystal clear and almost looks [like] shards of glass," Dr. Koufman said. "In a person with reflux, the mucus appears thick and like glue."

What To Do If You Think You Have Silent Acid Reflux

So what should you do if you think your symptoms are silent reflux and not seasonal allergies or a cold after all?

You can start with a two-week elimination diet, Dr. Koufman suggested. That means no alcohol, nothing from a can (yep, including seltzer), and cutting way back on dairy and coffee. You should also stick to low-fat, low-acidic foods, and you might want to avoid spicy or fried foods, which are also thought to trigger reflux. Tomatoes, cucumbers, onions, and garlic may also spark reflux symptoms, so eat them sparingly.

If you truly have silent reflux, these diet changes can likely help clear up your symptoms, and you can adopt some of these healthier eating habits for good if they keep silent reflux at bay.

According to the National Institute of Diabetes and Digestive and Kidney Diseases (NIDDK), tiny tweaks to your regular routine can help quell silent reflux, just as they can ease other types of the condition. Try not to eat or drink anything too close to bedtime—finish up three hours before you go to sleep, Dr. Koufman recommended. Prop your pillow up when you do hit the hay, as sleeping on an incline can help keep stomach acids where they belong.

Consider eating smaller meals throughout the day too, as a fuller stomach is more likely to push acid up the esophagus. And, if you're carrying around a few extra pounds, look at silent reflux as another convincing reason to lose weight. A November 2021 study published in The Laryngoscope indicated that participants who were affected by obesity had more issues with severe silent reflux.

If you still have worries about whether you're dealing with acid reflux over allergies, it's always a good idea to talk with your healthcare provider about possible options that can help get you some relief.

9 Serious Conditions That Can Feel Like Heartburn
Was this page helpful? 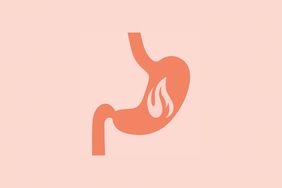 The Most Common Symptoms of Heartburn From Acid Reflux