Sharon Rosenblatt, 29, of New Haven, Connecticut, suffered debilitating depressive episodes before her period—until she started using birth control pills to stop getting periods at all.

I got my period around 13 or 14, and at first, it didn't affect my mood much. I started having more depression symptoms in high school. My parents figured it was probably just puberty, but I saw a nurse practitioner who was a really good listener, and I was diagnosed with depression. I went on Prozac during my senior year of high school. I hated the side effects like nausea, fogginess, and tiredness, but it did help my mood once my body got acclimated after the first month.

In college, my depression got really serious. During my sophomore year, I ended up in the emergency room after a suicide attempt. I remember bits and pieces of being in the hospital, but I didn't really know what was going on. I had to ask if they had tampons or pads in addition to not being sure what was happening to me.

Twice more I went to an in-patient psychiatric hospital the day before I started my period. Even the times that didn't send me to the hospital, my mood would really change. It was more intense than normal PMS—most people don't end up at the ER with their period. I would cry a lot over little things. I would feel suicidal for no reason. I'd be stuck in traffic driving to see friends, and I would wish a car would hit me. I would get sad that I felt like people weren't paying enough attention to me, but at the same time that I wasn't worthy of their attention.

I finally began to realize a pattern along with my therapist after working together for some time. Every time I had a major depressive episode, I was just about to menstruate. I would take more Xanax in advance of my period coming because I would start to feel so anxious beforehand about how depressed I was going to get. I had this sinking feeling in my stomach, I'd get so edgy and agitated, knowing my emotions would be all over the place.

I had addressed the root cause of my mental health issues; I got the correct diagnosis of post-traumatic stress disorder (PTSD). But my period was making it harder for me to manage my symptoms. My therapist said, "You've been in therapy for five years. You shouldn't be having these kinds of emotional reactions with the skills you have to handle it."

Birth Control and an Instant Change

The change was instant. I felt immediately better. Sure, the stopping of cramps was nice, but I was clear-headed and felt less frantic and raw. I still had to deal with what was causing my PTSD, but I felt stronger to deal with it in a more responsible and less emotional way. I also had the boundless support of friends and family, which made a tremendous difference, knowing it wasn't just me in this.

My gynecologist recommended taking birth control continuously as a way to curb the endometriosis, saying if I didn't have a period, then the rogue menstrual tissue growth would be kept at bay. Since it was out of his jurisdiction, he couldn't officially say that continuous birth control would positively influence my mood, but he had a feeling it might.

I had heard about women skipping periods with birth control, but I was a little worried about how to tell if I got pregnant. Some women have those "Thank god I got it this month!" moments, so that made me a little nervous. I also thought the blood would just… stay up there! I had to relearn how my body works (it doesn't build up like that!) before I could get more comfortable with the idea.

Now, it's been over 2 1/2 years since I had a period, and I'm not looking back. I don't take the inactive placebo pills in my birth control pack; instead, I start a new pack. I check in with my doctor regularly to make sure everything is fine and healthy. While I still do regular pregnancy tests since I can't use my period as a barometer, this was without a doubt the best decision I made for my mental and physical health.

I was able to lessen and ultimately stop my use of antidepressants and other psychiatric meds too. Now, I manage my mood by taking hormonal birth control and running. I have healthy emotions—I don't have anything I can't control and I'm not numb. I still get agitated and frustrated—I'm still human!—I can just handle these things now without losing it.

Birth control won't fix your problems, and my experience doesn't speak for everyone. I still had to go to therapy for a decade. Getting rid of my period wouldn't have gotten rid of what was making me feel that way. But now that both are out of the way, I'm a lot better.

Could Extreme PMS Symptoms Be Premenstrual Dysphoric Disorder?
Was this page helpful?

My Acid Reflux Was Unbearable, and Surgery Did Not Help
This 24-Year-Old Discovered She Had Pulsatile Tinnitus After Posting Her Symptoms in a Facebook Group

Living With Bipolar II Disorder
For 6 Years, Doctors Kept Telling Me I Had PMS—but It Turned Out to Be Brain Cancer 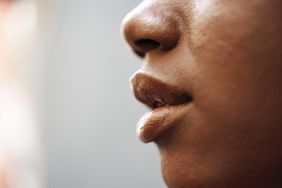