People with Crohn's disease often struggle to digest food. Sometimes a liquid diet is the answer. Read on for tips on what to do when going on a liquid diet.

Carina Storrs
Carina Storrs is a freelance health and science writer based in NYC. She has more than 12 years of experience covering infectious disease, mental health and biomedical research.
health's editorial guidelines

Crohn's disease, an inflammatory bowel disease (IBD), is rough on the digestive tract. With symptoms such as diarrhea, cramping and abdominal pain, a person with Crohn's disease often struggles to digest food, particularly when symptoms flare up.

Sometimes a liquid diet can help quell symptoms. Consuming liquids exclusively allows your intestines to rest while getting your needed nutrients.

"If you have a hard time maintaining your weight with regular food, whether it's because you have diarrhea or a poor appetite, I absolutely recommend drinking calories, sort of in combination with food," Tamara Duker Freuman, a registered dietitian in New York who specializes in digestive disorders, told Health.

While a liquid diet can give you enough energy, protein, and fat, it may not give you enough fiber, vitamins, and minerals you need. For this reason, it is important to choose your diet carefully during a flare-up. You should check in with a healthcare provider or dietitian before going on a solely liquid diet (anything more than a meal or two).

Here are 10 tips from nutrition experts to get the most out of a liquid diet.

Even if your Crohn's disease symptoms are under control, you may still have trouble keeping on weight.

If so, have a bottle of Ensure or Boost along with meals or make yourself a drink that has 200 to 300 calories, said Freuman.

Freuman added that Ensure and Boost, which deliver about 250 calories per serving, would probably be your first choice if you tolerate them because they are relatively inexpensive, sold everywhere, and nutritious.

Liquid Can Help a Flare

Liquid meals can be lifesavers during flare-ups when symptoms like diarrhea, cramping, and constipation are at their worst. A 2021 review of studies found that a liquid-formula-based diet resulted in early clinical remission, mucosal healing, fistula closure, and reduced size of abscesses in persons with Crohn's.

"You're going to see improvements in symptoms…your bad days will be easier with liquid meals," Martha Rosenau, a registered dietitian and owner of Peak Nutrition, based in Colorado Springs, Colo., told Health.

Rosenau recommended consuming as many calories, either as liquids or solids, as you can tolerate during flares.

When you're liquid dieting, making your own liquid meals can save money and be convenient if you make a batch and save it in the fridge.

Rosenau recommended this easy smoothie recipe: Blend milk (if you can tolerate it), or almond or soy milk if you are lactose intolerant, with yogurt or soy yogurt, protein powder (soy, egg, or whey), and a banana.

But there's no need to slave over a blender if you're not into it. Just buy liquid meal replacers instead, said Rosenau. "There is no nutritional benefit to making your own."

"One thing across the board that would be true of almost everyone who has Crohn's disease is that they are unlikely to tolerate dairy products in a flare," said Rosenau.

If that's true for you, skip milkshakes or Carnation Breakfast Essentials, which contains nonfat milk, and go for Ensure or Boost, which contain milk protein but not lactose. Or you can make smoothies with lactose-free dairy or soy products.

After a flare, try to reintroduce dairy such as yogurt, to see if you can tolerate it, said Rosenau.

Interestingly, research has found that lactose intolerance in inflammatory bowel diseases such as Crohn's disease is dependent on ethnic makeup of the population and usually not the disease. Researchers have also found that milk consumption may be associated with a decreased risk of developing Crohn's.

Sugar is probably not going to be your friend during a Crohn's flare. "It literally pulls water into your bowels and contributes to diarrhea," said Freuman.

Look for liquid meals that contain calories from fat and protein so you know that not all the calories are coming from sugar.

If you are making your own smoothies, plain coconut water is a good low-sugar source of electrolytes and vitamins, said Freuman.

Sugar-free products are not necessarily diarrhea-free, said Freuman. They often contain sugar alcohols that can make diarrhea worse (such as mannitol, sorbitol, and xylitol).

The same is true for Splenda, which can aggravate symptoms in some people, while Nutrasweet tends to be more tolerable for people with Crohn's disease, said Freuman.

Instead, opt for natural low-sugar sweeteners such as stevia.

Vitamin deficiencies can plague people with Crohn's, depending on the location and severity of their disease.

People often have vitamin B12 and vitamin D deficiencies, especially if the disease affects the ileal or lower section of their small intestine, as is often the case, Stephen Hanauer, MD, chief of gastroenterology, hepatology, and nutrition at University of Chicago, told Health.

Research has found that up to 60% to 70% of people with IBD have insufficient vitamin D levels. Damage higher up in the small intestine is associated with deficiencies in zinc, iron, and B vitamins.

You may not get all the vitamins and minerals you need on a liquid diet. As a result, your healthcare provider may recommend that you take certain vitamins and supplements.

When it comes to liquid meals, taste and tolerance vary between people almost as much as Crohn's disease itself, said Dr. Hanauer.

You might find that brands like Ensure or Boost upset your stomach, or you don't like the taste. "I hear from a lot of people that they're intensely sweet," said Rosenau.

Luckily, there are other options in your grocery or natural foods store. Rosenau said that some of her clients do really well with Mix1 protein shakes and GoodBelly juices, which are dairy-free and contain probiotics.

It can be a challenge to spark your appetite, especially if you are limited to liquid meals. Eating out in restaurants presents an entirely different challenge.

Soups can be a nutritious, savory break from sweet smoothies. "Anything that's broth based is good, like tomato soup, chicken, turkey, or fish broth," said Rosenau. High-fat creamy soups may worsen diarrhea and constipation, however.

Try adding peanut butter, frozen peaches, or mango chunks to smoothies. Peanut butter, unlike whole peanuts, is low-residue, and fruits that have been frozen tend to be more digestible.

A common dietary tip for people with Crohn's disease is to chew your food well.

You can also make solids easier to digest by cooking them well—think mushy, boiled vegetables or rice. These steps can make the solids you eat (or reincorporate after a flare) go down almost as smooth as the liquids. 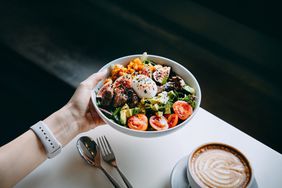 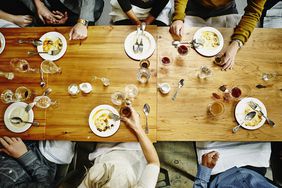 Crohn's Disease? 8 Tips for Eating Out