It's most likely a virus–but there could be other reasons your throat hurts, too.

Of all the complaints heard by doctors in their practices, "I have a sore throat," has to be near the top of the list.

That's courtesy of the wide array of conditions that can cause a throat to hurt, from infections to allergies to acid reflux and even tumors.

Pain is just one symptom of what's typically known as a sore throat. Other symptoms include having a scratchy feeling in your throat, trouble swallowing, more intense pain when you do swallow, and changes in your voice.

Chances are your sore throat will fade in a few days without any real prodding, but there could be trouble if it lingers. Here's a roadmap to what might be causing your throat to hurt.

How to Soothe a Sore Throat Fast, According to Experts

Viruses are by far the most common cause of sore throats, says Alan Mensch, MD, a pulmonologist and senior vice president of medical affairs at Northwell Health's Plainview and Syosset Hospitals in New York.

Often, it's the same viruses that cause the common cold or the flu that are making your throat hurt. But viruses that cause mononucleosis, measles, chickenpox, and croup (notable in children for its barking cough) can also produce sore throats.

Antibiotics won't help viral infections and shouldn't even be tried. What you can do instead: Gargle with warm salt water, try over-the-counter pain relievers like acetaminophen (Tylenol) or ibuprofen (Advil), make sure you stay hydrated, use a humidifier or steamer to ease respiratory symptoms, and get plenty of rest.

Most viral infections go away in about a week, with the exception of mono, which can drag on for weeks or months. Protect yourself from viral infections by washing your hands well and often. Don't get too close to people who are sick, and cover your own coughs and sneezes.

After viruses, bacteria are the most common cause of sore throats, says Kathleen Tibbetts, MD, assistant professor of otolaryngology at UT Southwestern Medical Center in Dallas. And at the top of that list, especially in children, is strep throat, caused by streptococcus bacteria.

Strep throat usually comes with a high fever (over 101), red spots or white patches on your tonsils, and swollen lymph nodes. A throat culture will tell you definitively if you have the infection and, if you do have strep, it's important to treat it.

"We worry about the late complications of strep," says Dr. Mensch. That can include damage to the kidneys and heart valves.

Tonsillitis is an umbrella term for inflamed and swollen tonsils, usually caused by a viral or bacterial infection.

The tonsils are two growths at the back of your throat that form a frontline of your body's immune system. They check out germs entering your body and often get infected in the process.

In addition to red, swollen tonsils, other symptoms of tonsillitis can include white or yellow patches on the tonsils, fever, voice changes, bad breath, and pain when you swallow. In severe cases, tonsils can get large enough to obstruct the nasal passages, causing breathing, swallowing, and sleep difficulties.

Upwards of 50 million people in the U.S. have allergies of one kind or another, according to the American College of Allergy, Asthma, and Immunology. Allergies happen when your body has an outsize reaction to certain foreign invaders such as dust, pollen, pet dander, or mold, setting off a cascade of symptoms including a runny or stuffed nose, sneezing, itching, and, yes, sometimes a sore throat.

Sore throats from allergies can be made worse by post-nasal drip, which is when the mucus normally produced by glands in your nose starts to build up and trickle down the back of your throat.

Allergy-related sore throats can be confused with viral and bacterial sore throats, but there are ways to tell them apart.

"Allergies are going to go on longer, and they're not going to have symptoms of fever," says Dr. Tibbetts. "You may have itchy eyes and a runny nose."

Many allergy-related sore throats also only appear during certain seasons, like fall or spring.

Irritants are different from allergies, even though they also cause reactions to certain outside elements, like air pollution, smoking (your own or someone else's), drinking, cleaning products, and chlorine.

"The allergy mechanism is an immune response," explains Dr. Tibbetts. "An irritation is not an immune reaction. It's just irritating the tissue–and we're seeing more and more of it in urban areas as people are exposed to pollution."

Exposure to certain irritants can make your throat chronically sore, so avoid them when you can.

Humidity and temperature both can affect the mucous membranes that line your throat. Dry, hot air–like in a heated building–can cause discomfort, and it tends to be worse first thing in the morning.

"A lot of time in the winter months you have the heater going so you're breathing dry air all night," says Dr. Tibbetts. "Use a humidifier in your room at night when you're sleeping." You can also heat up a pot of water and inhale the soothing steam, she adds.

Summer air conditioning can have a similarly painful effect on your throat.

Yelling and screaming can certainly hurt your throat, but so can talking a lot. Studies have found aerobics instructors and teachers have frequent sore throats. A phenomenon called "vocal fry" can also leave your throat feeling sore.

"It's the way that a lot of young people are talking in a gravelly voice," explains Dr. Tibbetts. "You're basically using your voice the wrong way."

There are actually voice therapists who can help you reverse the habit–that is, if you want to.

You may not think of a sore throat as a common symptom of acid reflux, but it can be, especially when the reflux is chronic, like it is in gastroesophageal reflux disease or GERD. GERD is a digestive disorder and your throat is, after all, part of your digestive apparatus.

"Stomach acid is coming up into your esophagus and then sometimes up into the throat," says Dr. Tibbetts. "Typically, people will have some other associated symptoms, like indigestion."

Symptoms can get worse after a big meal. Although there are plenty of over-the-counter and prescription medications to counter GERD, you can also tame the condition by losing weight and eating smaller, low-fat, low-acid meals.

Thanks to remarkable new medications, the number of new HIV cases in the U.S. is declining and even people who are infected are less likely to actually get sick. That said, sore throats can still sometimes appear in the collection of HIV symptoms.

Forty to 90% of people with HIV have flu-like symptoms–which may include a sore throat as well as fever, chills, and fatigue–about two to four weeks after they are first infected, according to HIV.gov.

People who've been infected with the HIV virus for a while may also get sore throats as a consequence of a secondary infection like oral thrush or cytomegalovirus, both common in people with HIV. People who have weakened immune systems for other reasons–because of chemotherapy, diabetes, or treatment with steroids–are also susceptible to sore throats from a variety of causes.

Throat cancers don't need to be at the top of your list of things to worry about when you have a sore throat, but they can happen.

"All sites of the throat can be affected from the upper part–the tonsil area–to the back of the tongue to the voice box and the upper part of the esophagus," says Dr. Tibbetts.

In addition to a sore throat, a tumor is also likely to manifest with other symptoms like a lump, hoarseness in your voice, trouble swallowing, weight loss, chronic fever or chills, and even pain in your ear.

Throat pain from a tumor also tends to linger. "Viral or bacterial sore throats should get better in days to weeks but if this is something that lasts weeks to months, that is concerning," says Dr. Tibbetts. If you have any of these red flags, see a doctor. 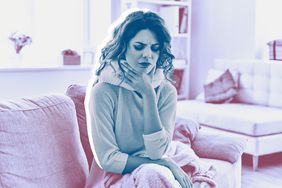 Sore Throat Can Be a Symptom of COVID-19