Sometimes, a runny nose will just run its course. But other times, you may need to see a healthcare provider.

Medically reviewed by Keri Peterson, MD
Keri Peterson, MD, is an internal medicine physician with a focus on aging well at her private practice in Manhattan. She is affiliated with several nearby hospitals, including Lenox Hill Hospital and Mount Sinai Medical Center.
learn more
In This Article
View All
In This Article

You probably have had a runny nose at some point in your life. So, you know how annoying it can be to have a tissue within close reach at all times.

But what you may not be familiar with is what exactly happens when your body continuously produces that nasal liquid, known medically as rhinitis. For starters, knowing that a "runny nose" is excess mucus dripping out of your nostrils is important. The discharge can be thin or thick and has a range of colors, from clear to yellowish to greenish.

Also, that excess mucus can drain down the back of the throat, called post-nasal drip, which sometimes accompanies a runny nose.

There are several causes for a runny nose. Here are some of the most common viruses, environmental triggers, and health conditions that can trigger a runny nose and how to stop that excess mucus.

What Causes a Runny Nose

A runny nose usually occurs when the tissues lining the nose become swollen from inflamed blood vessels. There are many causes of a runny nose, ranging from mild to serious ones.

Here are some common causes of a runny nose, including one possibly unknown cause you should know about.

Your nose helps filter, humidify, and warm the air into your lungs. That happens through a system that includes:

When it's cold out, dry air makes the nose work extra hard to add fluid. The excess fluid drips out of your nose.

You might get a runny nose if a virus enters your body and causes an illness. Some common viral illnesses that cause a runny nose include:

Your body's response to allergies is similar to how it reacts when you have a viral infection. Essentially, your body makes more mucus to get rid of the invader: the allergen.

The allergen triggers the immune system to send immune cells to wherever the allergen is, which opens the blood vessels. That response causes nasal congestion and extra mucus production.

The Centers for Disease Control and Prevention (CDC) lists runny nose as one of the main symptoms of COVID-19, a disease caused by the virus SARS-CoV-2. As with other viral infections, with COVID-19, your body tries to prevent the virus from entering the body.

Nasal spray decongestants can help relieve stuffiness. But using them too much can cause what's known as a rebound effect, where they make your symptoms worse.

"Nasal decongestants help to shrink or constrict blood vessels in the nose, which helps to decrease the sensation of nasal congestion," Sophia Tolliver, MD, MPH, a clinical assistant professor of family medicine at The Ohio State University Wexner Medical Center, told Health. "As the vessels shrink, blood and nutrients are squeezed out."

But once the medication wears off, the blood vessels become swollen again, leading to more congestion and runny nose symptoms.

Cerebrospinal fluid (CSF) leaks don't happen often. Still, it's a good idea to have it on your radar since there can be complications if untreated.

CSF is the cushion surrounding your brain and spinal cord to protect them from injury. In rare situations, CSF can leak into the spinal column or the skull.

A runny nose can be a symptom of the latter, a cranial CSF leak. That typically involves a watery-looking discharge that usually comes out of one nostril and a metallic taste in the back of your throat, said Dr. Tolliver.

The exact treatment for a runny nose ultimately depends on the underlying cause. Most of the time, a runny nose just has to run its course.

But if you want to do something to feel better until things clear up, you can try the following tricks:

How To Prevent a Runny Nose

There are certain runny nose causes, like being out in the cold, that you can only do so much about. But when it comes to viral illnesses, there are a few ways to prevent a runny nose, including:

If allergies usually cause your runny nose, the American College of Allergy, Asthma & Immunology recommends avoiding areas that will trigger your allergic reaction. You may also want to use OTC antihistamines or nasal steroid sprays to help manage your symptoms before they start.

If you develop a runny nose here and there, there's nothing to worry about. But there are a few different situations where you'd want to seek medical care for a runny nose, including:

A runny nose happens when mucus continuously drains out of your nostrils, typically when the tissues lining the nose become swollen from inflamed blood vessels. Anything from allergies to the common cold can cause a runny nose. Most of the time, a runny nose just needs to run its course.

In some cases, a runny nose may require medical intervention. Consult a healthcare provider if only one side of the nose is runny or other symptoms, such as blurred vision or white or yellow spots on the throat, accompany your runny nose. 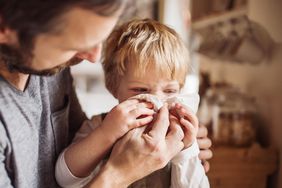