Elinor Cleghorn was in her early 20s when she began experiencing pain, but it was dismissed for years. Here are four things she wants you to know about getting the right care.

Elinor Cleghorn's pain started in 2002, when she was 21. For months she'd wake up with pain in her legs that radiated from her hips down to her ankles. By nighttime, her ankles would be so swollen that she couldn't walk.

When she went to her primary care physician about the pain and he felt her swollen ankles, he said, "Mmm, I'm guessing you like a drink. This must be gout?" No, she didn't think it was gout, which is a form of arthritis that can be the result of chronic drinking. "Might I ask if an attractive young woman such as yourself might be pregnant?" he inquired next. No, she knew she wasn't pregnant. "I can see nothing wrong with you," he said, looking at the clock. "It's probably just your hormones."

The pain continued. She saw specialist after specialist, but none had an explanation for the pain, which was so overpowering she felt it in her head, throat, and deep in her belly. With no answers from doctors, she tried to resume her life in England the best as she could, working, getting married, and having a baby.

The pain was there eight years later in 2010, when she was pregnant with her second son. During her 20-week ultrasound, images revealed that her baby's heart was beating too slowly. Further testing revealed at that time that the baby had congenital heart block—a condition caused by an antibody that had traveled across Cleghorn's placenta, attached to the baby's heart cells, and caused inflammation that slowed his heart muscle.

"But even then my own health still wasn't a priority," she tells Health. "The priority was there's something happening in my immune system that's causing this abnormality in my baby's heart, but nobody explained to me what that might mean for my own health. And they definitely didn't say, 'Oh, this explains your medical history.'"

A steroid treatment worked to normalize the baby's heartbeat, and Cleghorn gave birth to a healthy boy. But even though the traveling antibody meant that her own health had some effect on her baby, doctors didn't refer Cleghorn to a specialist to have her checked out. They didn't even recommend that she follow up with her primary care physician—a different one than from years earlier—to let him know what had happened.

Because of that, doctors didn't know that the same antibody that threatened her baby's heart was making its way toward Cleghorn's own heart. Months after giving birth, she developed a sharp pain between her shoulder blades, a racing heartbeat, and shallow breathing. Tests would show that her heart—actually her whole body—was inflamed. It wasn't until this event that a rheumatologist made the diagnosis that explained years of pain: systemic lupus erythematosus (SLE).

SLE is "an autoimmune disease in which the immune system attacks its own tissues, causing widespread inflammation and tissue damage in the affected organs," according to the Centers for Disease Control and Prevention. Cleghorn finally had the name of what was behind her years of pain and swelling. This form of lupus can be life-threatening; it can limit physical, mental, and social functioning and has no cure.

While devastating, the diagnosis was also a relief. After years of frustration having her symptoms dismissed, she now had confirmation that what she was experiencing wasn't due to her "hormones," and it wasn't psychosomatic, both of which some doctors she saw led her to believe. There was also relief because she was now able to properly manage her condition. Although she still suffers from symptoms like joint pain and fatigue, her SLE has been under control for several years. She takes medication every day that will hopefully continue to keepmore serious, organ-damaging flares of lupus at bay.

Cleghorn, 41, is now a cultural historian in the south of England. She used her own experience of having pain brushed aside by doctors as fuel for her book, Unwell Women: Misdiagnosis and Myth in a Man-Made World. Tracing the medical establishment's treatment of women from ancient Greece to the present day and including real-life examples, Cleghorn's book details how women have been left to suffer unnecessarily because their illnesses were misunderstood, mischaracterized, or misdiagnosed.

Cleghorn refers to women who live with health impediments as "unwell women." Being "unwell," according to Cleghorn, isn't the same as being ill or having a disease that is always noticeable. "Unwell" also refers to "women who kind of deviated from the social norm of what's deemed proper or acceptable," in the context of healthfulness, she says. That could mean living between flares of a disease or having invisible chronic pain.

She says she is one of countless unwell women—and she's learned a lot about navigating life in an unwell state thanks to the research she did for her book as well as her own experience. Here's what Cleghorn wants others who are also unwell to know about getting the the care they deserve.

Speak up honestly about your pain

When her pain first began, Cleghorn says she "felt very shamed by doctors who were disavowing my pain and sort of blaming it on my femaleness, blaming it on my emotions, doing the classic medical gaslighting." She began internalizing their messages, thinking that maybe she was imagining the pain and other symptoms.

So when she felt pain during her second pregnancy, she expected the same dismissal. "I definitely put off going to the doctor longer than I should when I had that heart condition because the only symptom I had to go on was pain," she recalls. "I had pain in my back, pain in my chest, pain in my arms. And I just had this general sense that if I went to my [general practitioner] and said I was in pain [he'd say], 'You have a newborn baby. You're probably not sleeping. You're breastfeeding. You're carrying your baby. You have a toddler.'"

Cleghorn advises to trust your gut when it comes to making your pain known—and if you're blown off, see another doctor, and then another. "My experience of a long symptom onset and then an eventual diagnosis—of this sort of misdiagnosis—is not uncommon at all; I'm not singular. So I'm not ashamed by any of it now that I know that I was absolutely right in my conviction that there was something going wrong with my body," she says.

Get help from others if you need it

Speaking up for yourself is an important part of being an unwell woman, according to Cleghorn. That is, if you have the energy and strength to stand up to your doctors. As she points out, not everyone has the ability to speak up for themselves, "especially someone who is unwell, who has been through medical dismissal and gaslighting, or who has been traumatized by medical procedures or interactions," Cleghorn says. That's when outside help might be needed.

For those who can't speak up for themselves, Cleghorn says that patient advocates can do it for you. These professionals will help you understand your diagnoses and treatment options, stay with you in the ER to help you communicate your needs to the doctor and nurses, and help you stand up to providers you think aren't listening. Many hospital systems have a patient advocacy department you can turn to. If you're not being treated at a large hospital system, you can search for patient advocates at the AdvoConnection Directory, National Association of Healthcare Advocacy, or Patient Advocate Foundation.

You can also take a trusted friend to your appointment—someone who doesn't necessarily have to speak for you but who can listen for you in that room and take notes. "When you're unwell it's emotional, and rightly so. So having someone there who can advocate, someone you trust, someone you know will not speak for you or over you, that will be helpful," Cleghorn says.

One way to get the care you need is by keeping a log of your symptoms. It's something Cleghorn has done that has worked for her.

"It seems unnecessary that any of us should sort of build a case for our own health care, but lots of complex disease, especially autoimmune diseases, are multi-symptomatic and a lot of those symptoms fall under a lot of specialties of medicine," Cleghorn says. Keeping track of all the different symptoms can be overwhelming. "…It can be really, really helpful to keep a diary as simple as, 'On this day,' with what your symptoms are like so that when you go to the doctor's office, you can give them a sort of clear picture of what you know you've experienced over a given amount of time."

Rather than use a numerical pain scale in her diary, Cleghorn describes her pain in detail, like where it is or how it has affected her day. For example, did she experience difficulty sleeping, or was her mobility affected?

"I think having something to refer to, personally, when I explain how I have been feeling to my current lupus consultant, really helps construct a picture of what I have been going through, which is helpful mostly for me when I try to articulate my own experiences," Cleghorn says.

Not only can a symptoms diary present a clearer view of your health history to both you and your doctor, but it can also be a crutch of sorts if you are intimidated by medical settings—with a symptoms diary, you have something concrete to present or talk from, Cleghorn adds.

Find support from other unwell women

When Cleghorn was struggling with her symptoms and being dismissed by doctors, she says there was no subculture of women sharing similar stories and being open about their health issues. That's changed. Women are much more open about being unwell, reaching out to one another for support and guidance.

By writing her book, Cleghorn wants help create a culture where others can also speak out about their medical experience. "I always imagined this audience of readers who had maybe had similar experiences and also wanted to understand what they're experiencing was really, really important and singular but also wasn't unique, like they were not alone in that," she says. As she sees it, gender-based myths have negatively impacted women's care, treatment, and diagnosis, especially when it comes to chronic pain.

Cleghorn says that doing her own research did help her in her own health journey—though she recognizes that some doctors might not support this. By reading about other people's experiences and finding communities on Instagram, Twitter, and in chat rooms, you can get knowledge about your own condition, and also a sense that you're not alone. 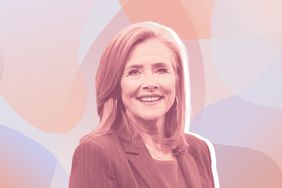